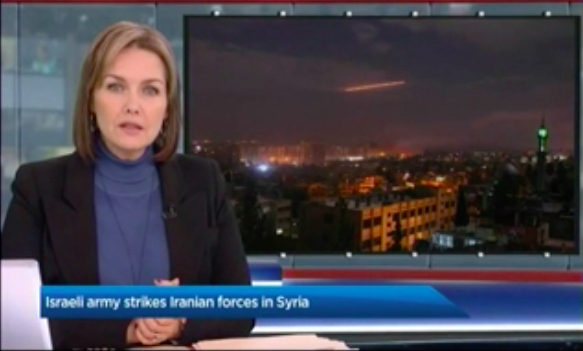 On January 21, Global National broadcast a report about how Israel launched airstrikes on Iranian targets inside Syria after an Iranian missile was fired at the Golan Heights.

Israel is claiming responsibility for a series of deadly airstrikes on Iranian military targets inside Syria. The pre-dawn strike which killed at least 11 people, was in response to an Iranian missile attack on the Israeli-occupied Golan Heights yesterday. Today’s admission is rare, Israel has a longstanding policy of avoiding public admission of involvement in Syria. The head of Iran’s air force is threatening serious retaliation.”

We’re ready for the decisive war that will bring about Israel’s disappearance from the earth. Our young airmen are prepared for the day when Israel will be destroyed.”

Calling for the de facto annihilation of 7 million+ Jews and the destruction of Israel cannot be whitewashed as a mere threat to seriously retaliate. The statement by this high-ranking Iranian official is tantamount to incitement to genocide and is a flagrant violation of international law.

HonestReporting Canada has filed a complaint with Global National asking the news network to immediately clarify the true words of the Iranian air force chief and his clear threats to destroy Israel.

We await response from Global National. Stay tuned to this page for future updates.