In the December 27 edition of the Toronto Star, the following Reuters photograph was published depicting a 15-year-old Palestinian boy and his 14-year-old bride whose face was covered in a shroud to conceal her identity with a caption that focused only on how it’s tough to be a “young groom” in Gaza. 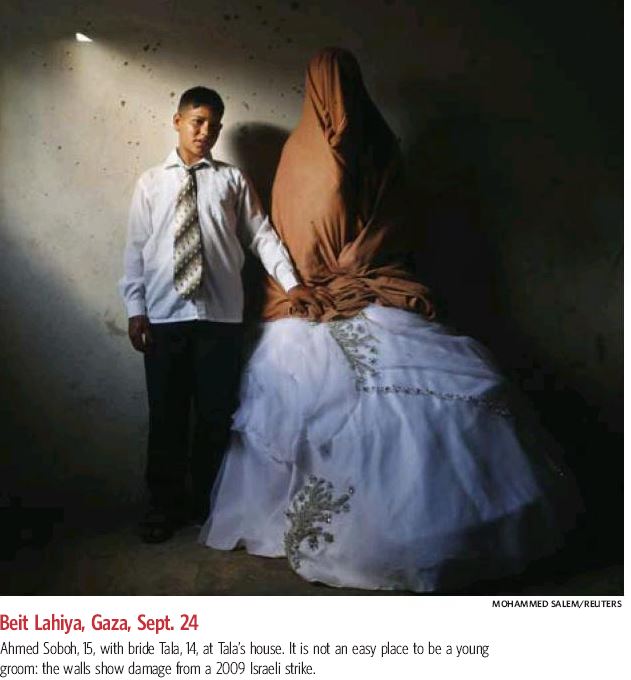 Why is life tough you might ask? According to this caption alone, the walls of this newly minted child-wife’s house was allegedly “damaged from a 2009 Israeli strike”. Over four years ago, it should be noted.

While rich in pathos and leaving aside the veracity issues about this claim, we can think of another factor why life would be tough for these kids: the fact that children are being married off to one another in Islamist Gaza. In fact, the Daily Mail reports that 35% of Gazan brides are under 17 years of age.

In 2010, Jonathan Halevy, a senior researcher of the Middle East and radical Islam at the Jerusalem Center for Public Affairs (JCPA), wrote about how “child marriage is well known and rooted in Palestinian society based on its culture and religion.” Halevy commented on a Toronto Star column by Antonia Zerbisias entitled: “Gazan weddings not about pedophilia”.

Halevy observed at the time:

“Local human rights organizations are deeply concerned about child marriage in Palestinian society. Participants of a conference in Gaza dedicated to this issue in January 2008, organized by the Palestinian Medical Relief Society (PMRS), warned of the “significant rise in child marriage rate” and its severe psychological and physical implications on youth. The phenomenon of early marriage was also discussed in April 2008 in another conference held by the Palestinian Red Crescent and Widad Society.

The Palestinian law, amended in 2005 and valid in the Gaza Strip, set 18 as the minimum age for marriage. However, it gives authority to the Islamic court to approve marriages of minor females and males alike if the supreme judge of the Islamic court is convinced that they are mature physically and mentally.”

Context omitted by the Star, such as making clear Hamas’ designation as a terrorist entity and its extremist rule over Gaza, would have helped explain how unemployment, poor quality of education, raising children to be “martyrs” and the lack of freedom and basic human rights would make life hard for a child bride and groom.

Tell the Toronto Star of its failure to acknowledge the backward nature of Gazan society, where children are married off to one another in what is tantamount to child abuse. Send a letter to the editor to: lettertoed@thestar.ca.