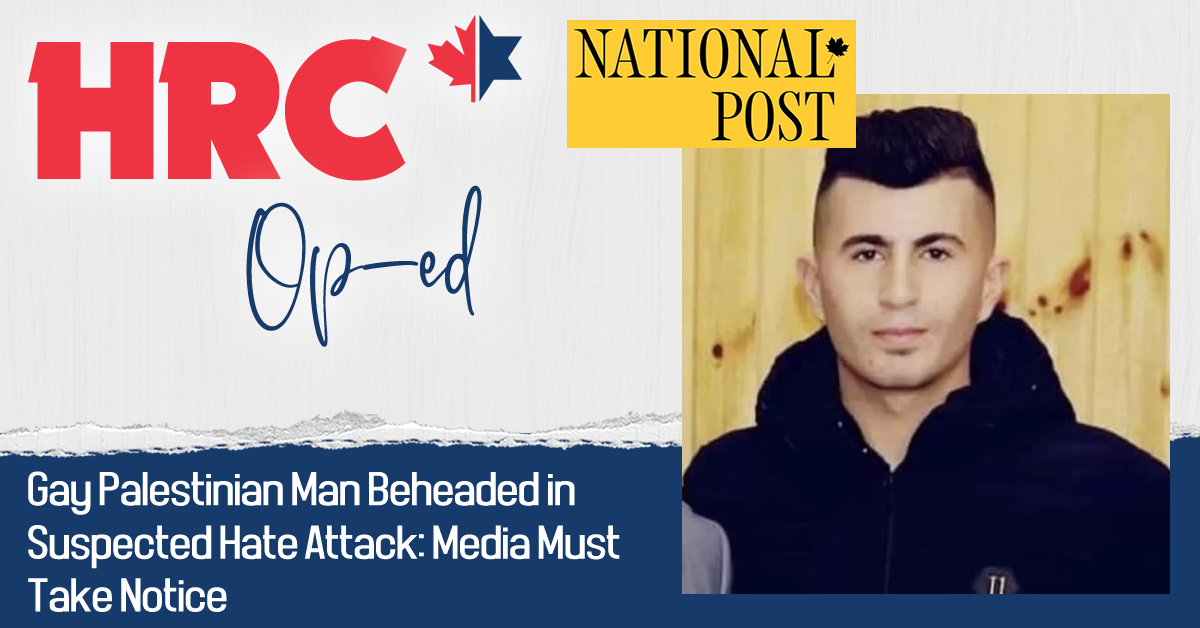 The following HRC op-ed was published in The National Post on Friday, October 28, 2022:

Pro-Israel educators frequently make the point that the Jewish State is the only country in the Middle East which protects the freedoms of all citizens, regardless of their sexual orientation. Each year, Pride Parades take place in both Tel Aviv, the secular and cosmopolitan centre of Israel, which attracts as many as a quarter million attendees, as well as Jerusalem, the more religiously conservative capital city.

In response, anti-Israel activists frequently deride such actions as little more than propaganda, even coining the term “pinkwashing” to describe it. In the words of the official BDS movement, pinkwashing “cynically exploits (LGBT) rights to project a progressive image while concealing Israel’s occupation and apartheid policies oppressing Palestinians.”

While the claim of pinkwashing has always been nonsensical – Israel provides rights to all its citizens as a matter of principle, not as a matter of political expediency – a recent horrific event serves as a powerful reminder of the lack of LGBTQ+ rights in the neighbouring Palestinian Authority (PA).

On October 7, Palestinian police announced that they had arrested a suspect related to the grisly murder of 25-year-old Ahmad Abu Marhia, a gay Palestinian man whose decapitated body had been found in Hebron, a city primarily under the control of the Palestinian Authority. 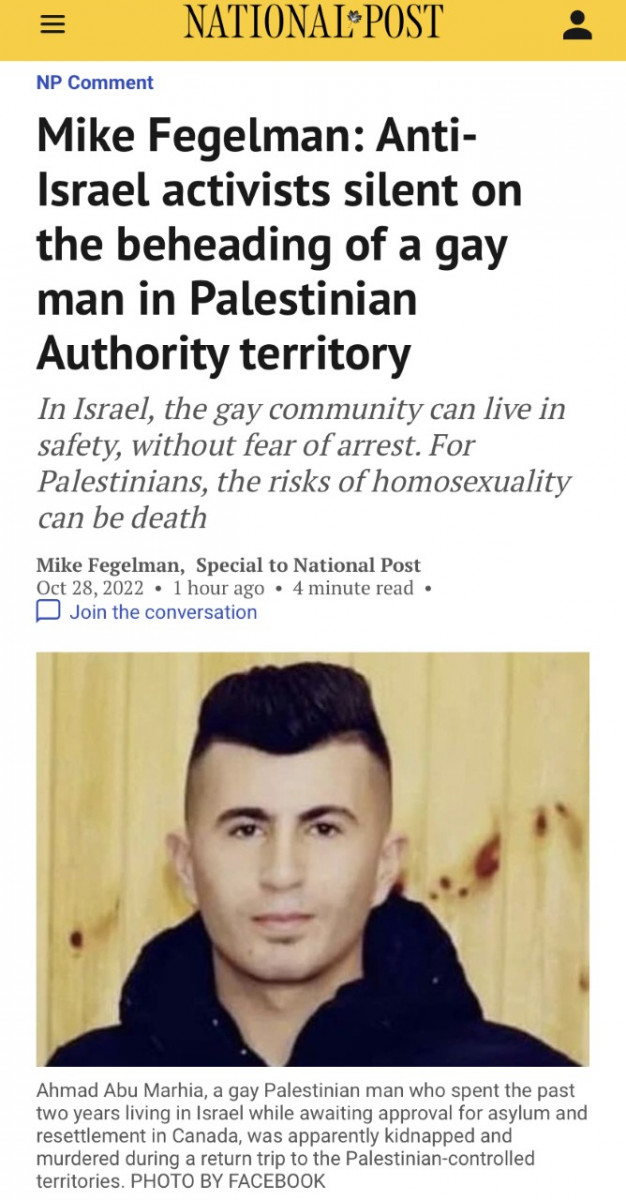 According to news reports, Abu Marhia’s life was under threat in PA controlled areas and he spent the last two years living in Israel while awaiting approval for asylum and resettlement in Canada, and was apparently kidnapped during a return trip to the Palestinian-controlled territories.

As pointed out in a BBC News article covering Abu Marhia’s death, while conservative segments of both Israeli and Palestinian societies may not have condoned his sexual orientation, in Israel, the judgement would have stopped there.

“Homosexuality is rejected within the most socially and religiously conservative parts of both Palestinian and Israeli societies but gay people in Israel can freely lead their lives,” the report reads. Under both the Palestinian Authority and Hamas, homosexuality is a punishable crime.

Abu Marhia’s tragic murder, while particularly gruesome, is a symptom of a much larger homophobic campaign, both in territories controlled by the Palestinian Authority and Hamas, the Islamist terrorist group in charge of the Gaza Strip.

Homosexual men in Gaza have reported being arrested, beaten and tortured at the hands of the Hamas regime.

Often, the punishments can be far worse.

In 2016, Mahmoud Ishtiwi, a senior Hamas commander who had previously overseen much of the group’s terrorism against Israel, was executed by fellow Hamas officials after being accused of engaging in homosexual acts, punishable by death in Gaza. It comes as little surprise that Israel’s protection of human rights has attracted close to 100 gay Palestinians, who have sought refuge and safety within the Jewish State. In a study entitled: “Nowhere to Run: Gay Palestinian Asylum-Seekers in Israel,” authors Michael Kagan and Anat Ben-Dor spelled out vividly the dangers facing these Palestinians: they “face torture and potentially lethal violence at the hands of PA security forces, members of their own families, and armed militant groups.”

In Israel, life for members of the gay community is a world apart. Israelis – and for that matter, anyone inside Israel – can live their lives safely, and without fear of arrest, torture or murder because of their lifestyle. In Israel, same-sex couples can adopt, their marriages conducted abroad are formally recognized, and a number of openly gay Israelis have served as Members of the Knesset (Parliament) and even as cabinet ministers. Tel Aviv has even been called one of the friendliest and most welcoming cities in the world for members of the LGBTQ+ community.

But for Israel-demonizers, it seems that bashing Israel will always take precedence over the protection of Palestinian and LGBTQ+ rights. How else can the BDS movement justify its attacks on Israel for its protection of gay rights in Israel, when the reality is that for members of the Palestinian gay community, the risks of homosexuality can be death?

Showcasing Israel’s freedoms – and conversely, the horrific conditions facing gay Palestinians – is not a propaganda talking point. It’s a statement of fact that Israel recognizes and protects human rights in a way which often goes unreported in news coverage of the Israel-Palestinian conflict. And yet to date, coverage of Abu Marhia’s murder has been rather limited in Canadian and international news outlets.

For a progressive society like Canada that extolls liberal values, this grotesque crime should be widely reported, and universally condemned by political stakeholders, student groups, human rights organizations, the LGTBQ+ community, and Canadians of all stripes.

As widespread anti-gay hate crimes continue in both Palestinian Authority and Hamas-controlled areas, as well as in the broader Middle East, the silence (and hypocrisy) is deafening.