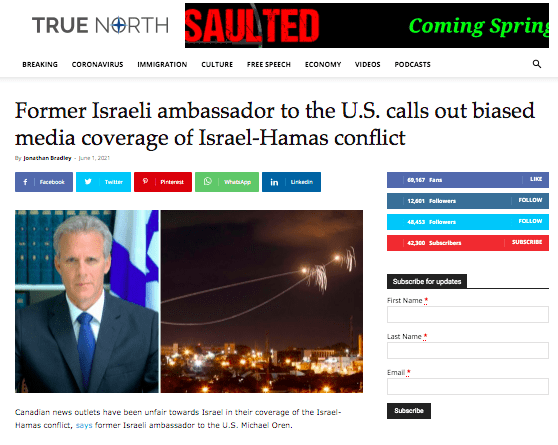 Thank you to True North for covering our Urgent Briefing with former Israeli ambassador to the U.S., Michael Oren this past Sunday May 30.

Ambassador Oren excoriated the Canadian and mainstream media for their biased reporting of the recent conflict between Hamas terrorists and Israeli forces.

Read True North’s coverage on its website, or as appended below. To watch our briefing, please click here or immediately below:

Canadian news outlets have been unfair towards Israel in their coverage of the Israel-Hamas conflict, says former Israeli ambassador to the U.S. Michael Oren.

Oren appeared as a special guest at a lecture organized by pro-Israel advocacy group Honest Reporting Canada called “The Media War Against Israel” on Sunday.

The former ambassador said news outlets have been inaccurately using the term “disproportionate” when reporting on Israel’s response to the terrorist organization Hamas.

“Under international law, proportionate force is the force required to eliminate a threat,” said Oren. “And clearly with rockets still firing at the end of the war with Gaza, we have not eliminated the threat.”

The 2021 Israel-Hamas conflict began when Hamas began firing rockets into Israel from the Gaza strip. Hamas ultimately launched more than 4,000 rockets, 90% of which were intercepted by Israel’s Iron Dome defense system. Israel conducted about 1,500 strikes on Hamas targets. The tensions subsided after 11 days with a May 21 ceasefire.

Israel has been criticized for launching strikes that have civilian casualties, but Oren said Hamas does not invest any money in civil defense and actually seeks to have Israel kill people in Gaza.

He noted that this strategy leads to the unintentional killing of people in Gaza by Israel, Hamas can turn into public outrage to justify its attacks on Israel.

According to the former ambassador, despite Israel’s attempts to move trucks with food, construction materials and medicine into Gaza, Hamas intentionally maintains a humanitarian disaster to garner positive news coverage by international outlets.

The 2021 Israel-Palestine crisis has led to many Jewish people being victims of violence and hate crimes around the world, including in Canada. B’nai Brith Canada said the number of anti-Semitic assaults in May 2021 surpassed the total for all of 2020.

During the lecture, Honest Reporting Canada chairman Jonas Prince said progressives have been using coded language to show their disdain to Israel. One example Prince references is the slogan “from the river to the sea: Palestine will be free,” which means to eliminate Israel.

Prince said slogans such as these ones normalize antisemitism and as a result Jews are made to feel that they need to denounce their Zionism or face boycotting.

“This kind of crime for being a Jew I don’t think we’ve seen since the ‘30s,” said Prince.