Focus Magazine Gives a Platfom to the Ethnic Cleansing Libel

Focus, Victoria’s monthly magazine featuring “people, ideas and culture”, has published an ad in its April 2014 issue claiming “Israeli Ethnic Cleansing of Palestine Continues”. The ad is sponsored by the BDS movement and Coalition Against Israeli Apartheid. 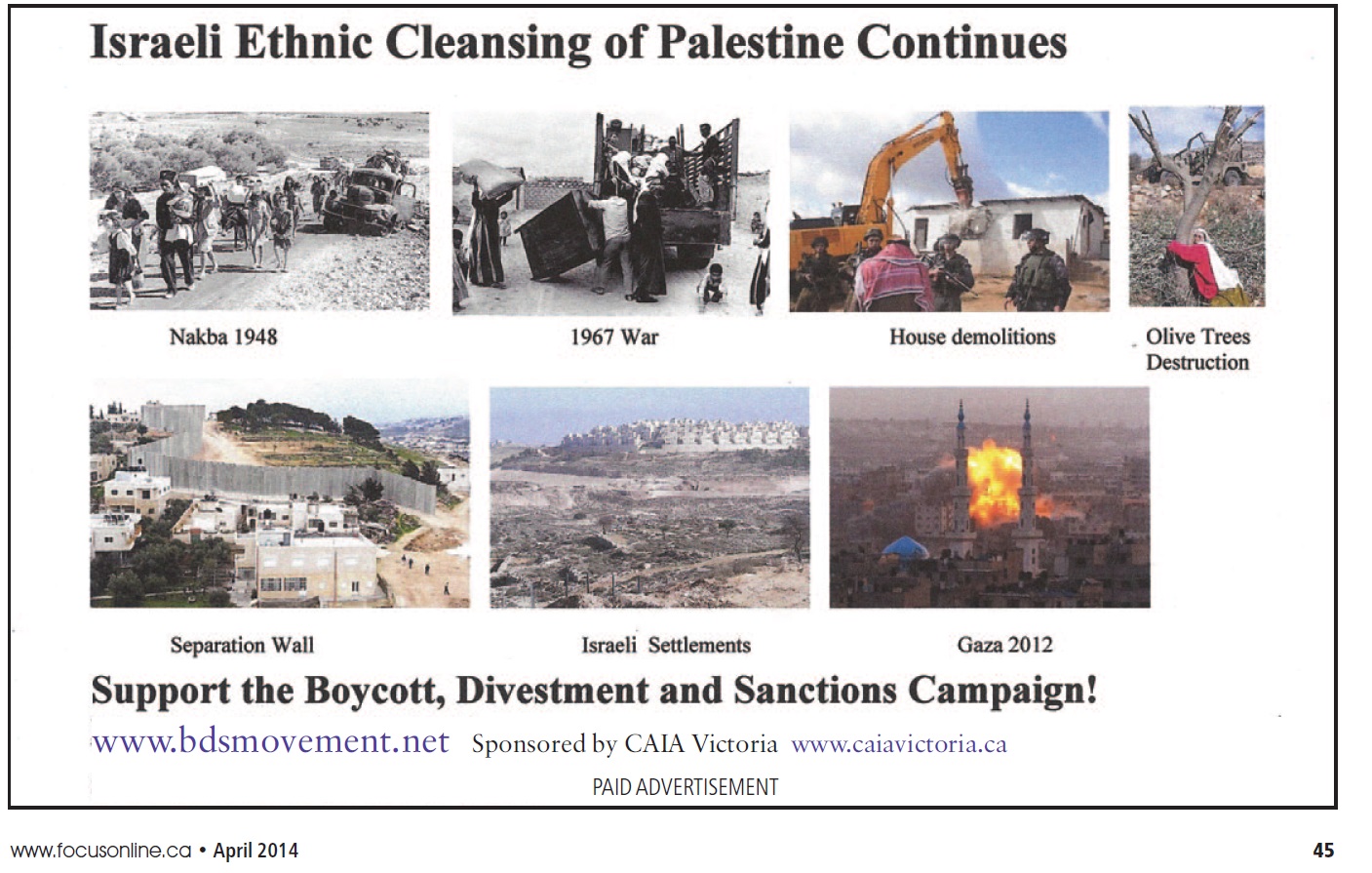 A photo referring to Israel’s creation in 1948 as a Naqba (catastrophe) sets the tone for this ad and takes issue with Israel’s establishment as a state in 1948. The Naqba is a reference to the “catastrophe” that they claim is Israel. In 1948, Arabs refused to establish a state side-by-side with Israel and have since defined Palestinian aspirations as replacing and conquering the Jewish state, viewing its establishment as a failure to achieve the Jewish state’s annihilation.

Focus has given a platform to salacious accusations by groups who seek the destruction of a UN member state, fanning the flames of hatred.

The charge of ethnic cleansing is laughable, and one has only to look at population statistics to see why. In the West Bank, the Palestinian-Arab population has increased from 462,000 in 1949 to more than 2.5 million today. In Gaza, the number increased from 82,000 to 1.7 million.

A charge of ethnic cleansing, however, is appropriate when talking about the Middle East’s Jews. The Jewish population in the Arab Middle East has decreased from over 850,000 in 1948 to less than 5,000 today.

Furthermore, today the Jewish population in Palestinian-controlled Gaza and the West Bank is practically nil. On the other hand, Arabs comprise 20% of Israel’s population.

Despite the boldfaced falsehood about Israeli ethnic cleansing , Focus magazine has decided to use its pages as a platform for this libel and in so doing gave credence to groups whose goal is the mendacious manipulation of the public in furtherance of its objective to destroy the Jewish state.

Please send your considered comments to Focus Magazine on their online comment form.