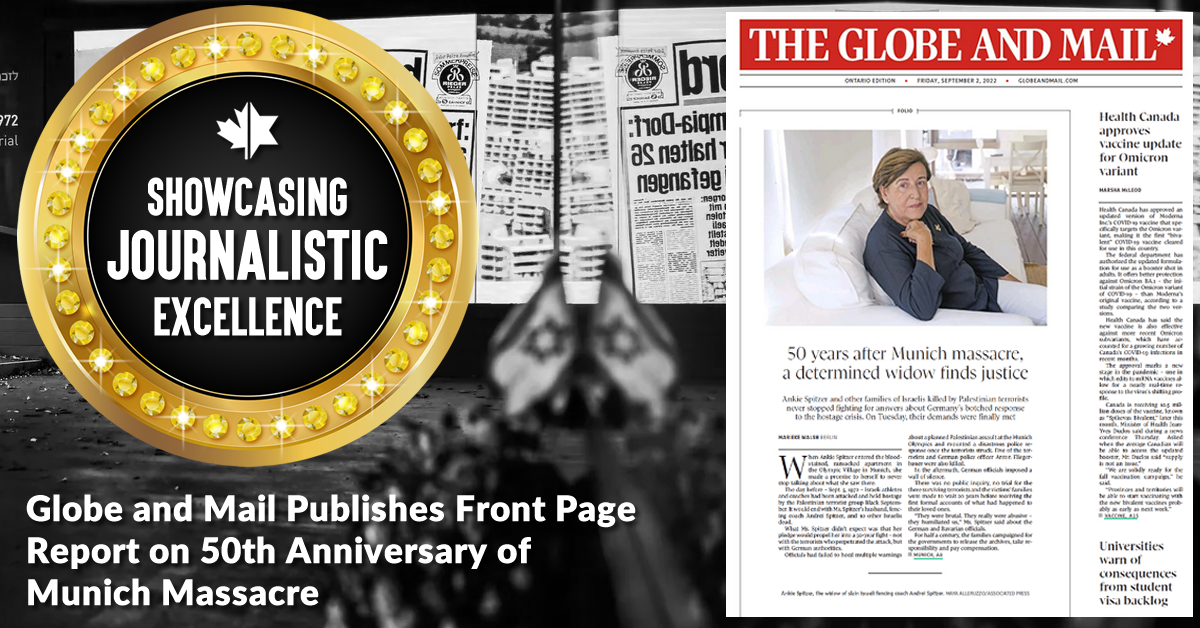 Over a period of twenty hours, stretching from the early morning hours of September 6, 1972 to the next day just after midnight, 11 Israeli athletes and one West German police officer were murdered by Palestinian terrorists inside Munich’s Olympic Village.

In advance of the 50th anniversary of the massacre, on September 2, the Globe & Mail published an extensive front page feature report entitled: “50 years after Munich massacre, a determined widow finds justice,” by journalist Marieke Walsh, profiling Ankie Spitzer, whose husband Andrei was one of the 11 Israeli athletes murdered in 1972. 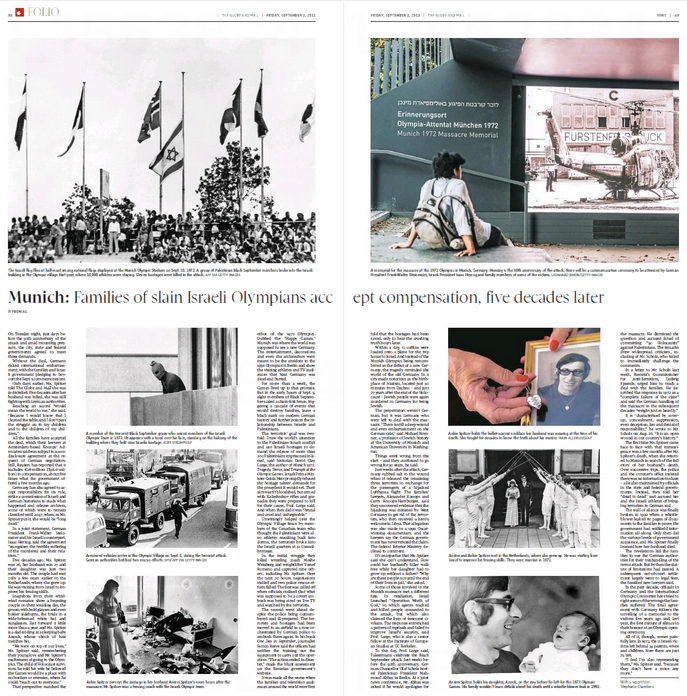 The article includes an extensive interview with Spitzer and her five decade-long legal fight with authorities in Germany and the German state of Bavaria, who for decades had failed to properly address the aftermath of the attack.

Prior to the massacre, German authorities had reportedly ignored signs that an attack was imminent. And after the attack, widows like Spitzer faced silence and stonewalling by the German and Bavarian governments. As reported by Walsh, “there was no public inquiry, no trial for the three surviving terrorists and the victims’ families were made to wait 20 years before receiving the first formal accounts of what had happened to their loved ones.”

For decades, Spitzer and others have fought German authorities to award compensation to the families of those murdered, as well as release long-hidden archives relating to the massacre and to take formal responsibility for the attack.

Until this week, those efforts had not been successful.

Finally, German authorities reached an agreement with the families of the murdered, which will see Germany accept formal responsibility for the terrorist attack, as well as release archival material relating to the massacre, and provide compensation of roughly $37 million CAD to the families.

The agreement, though very belated, is nevertheless critically important, both to provide closure to the families of the victims, and to ensure that Germany makes a public stand that even though it was Palestinian terrorists who committed the atrocities, it was Germany’s failures in 1972 which in part ensured the attacks were successful.

Even the very reporting of the agreement by the Globe and Mail plays an important role in elevating truth over disinformation.

While Germany had failed to take proper responsibility for 50 years, the leadership of the Palestinian Authority, including its current president Mahmoud Abbas, the successor to the perpetrators, had done even worse: they somehow found a way to blame Israel.

On August 16, Abbas was in Berlin meeting with Germany’s new chancellor, Olaf Scholz, when a reporter asked him if he would apologize to Israel and Germany for Black September’s terrorist attack.

In response, Abbas refused to apologize and even condemn the massacre. Going further, Abbas pointed the finger at Israel, claiming Israel had committed “50 Holocausts” against the Palestinians.

Such a claim of a Holocaust against the Palestinians, let alone 50 is patently absurd, even laughable, given that today the Arab population between the Jordan River and Mediterranean Sea numbers more than 7.5 million people, a jump of more than 500% since 1948.

But Abbas’ words are no laughing matter.

Allegations of Israeli atrocities such as genocide and ethnic cleansing against Palestinians have been used to justify boycotts against Israel, and have been used as part of widespread disinformation campaigns against the Jewish State.

Thus, giving proper media attention on the 50th anniversary to the Munich massacre and the new agreement between Germany and the victims’ families is more than a news report; in an environment of historical revisionism and whitewashing of a brutal attack, it puts truth front and centre.

Reports like the Globe and Mail’s also highlight an important and yet deeply uncomfortable fact: that Mahmoud Abbas and the Palestinian Authority, despite their ostensible roles as Israel’s peace partner, are in fact the successors of the 1972 perpetrators, and even after 50 years, Abbas not only refuses to take responsibility, but continues to peddle propaganda against the Jewish State which helps to foment hatred and ongoing terrorist attacks against the country.

Kudos to the Globe & Mail and to journalist Marieke Walsh on producing this important report about how Germany agreed to pay compensation to the families of 1972 Munich Olympics massacre victims and for giving it the front-page, feature-length attention that it deserves. Please commend the Globe and Mail by sending letters to: letters@globeandmail.com and to reporter Marieke Walsh at: mwalsh@globeandmail.com.