Tragically, the baby boy born prematurely as a result of Sunday’s terror attack near Ofra died on Wednesday evening, after doctors in Shaare Zedek Medical Center in Jerusalem fought for close to 72 hours to save him.

Canadian and international media often shy away from using the word “terrorism” and its variants when discussing violence directed against Israeli civilians, despite using this term to describe similar acts of violence in other countries directed at innocents for political purposes. 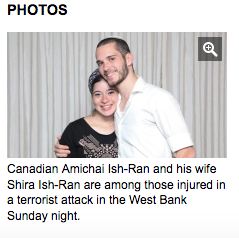 With this in mind, HonestReporting Canada was very pleased to see CTV News.ca and CTV Montreal feature coverage on December 10 of a Palestinian terror attack that saw a Canadian-Israeli citizen get injured, along with his Israeli wife and and their now prematurely born child that is presently clinging to life in an Israeli hospital.

CTV reported that: “A Canadian citizen is among those injured in a terrorist attack in the West Bank Sunday night.. The drive-by shooting happened in Ofra, a Jewish settlement. Israeli authorities say a suspected Palestinian gunman opened fire on a group of people waiting at a bus stop. Among the injured were two family members of a prominent Montreal attorney.”

Using the T-Word and its Variants…

CTV’s main headline, the lead paragraph and photo caption all describe the attacker as a “terrorist” or mention that a “terror” attack took place.

CTV’s website features an interview conducted by CTV reporter Cindy Sherwin with Montreal lawyer Jordan Charness who spoke about his family, “who are among those injured in Sunday’s terrorist attack in the West Bank.”

HonestReporting Canada encourages our subscribers to send emails to CTV News thanking this Canadian news outlet for calling Palestinian terror by its rightful name and for providing important coverage of this odious terror attack. Thanks to CTV News, Canadians were properly informed of this horrible attack. Please send emails to: montrealnews@ctv.ca.