Today on both the CBC’s website and CBC News Network, Mideast correspondent Derek Stoffel highlighted how despite being officially at war with Syria, Israel has for the last 3 and a half years been providing medical treatment to over 2,600 Syrians injured in the civil war.

Israel Defense Forces medics in field hospitals in the Golan and expert surgeons and physicians in Israeli hospitals have provided medical aid to injured and ailing Syrians.

Read and watch the CBC’s reports by clicking here or on the image/video below: 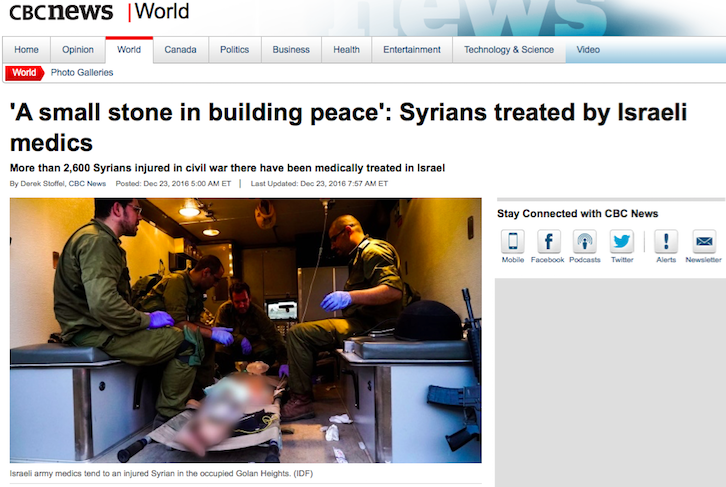 In his report, Stoffel notes that Israeli Prime Minister Netanyahu has professed his desire to take in even more wounded Syrians. According to Stoffel:

“With the war in Syria showing no sign of ending, Israel’s prime minister said his government wants to offer medical assistance to even more Syrians.

“We see the tragedy, the terrible suffering of civilians, and I’ve asked the Foreign Ministry to seek ways to expand our medical assistance to the civilian casualties of the Syrian tragedy, specifically in Aleppo where we’re prepared to take in wounded women and children and also men if they’re not combatants,” prime minister Benjamin Netanyahu told foreign journalists in Jerusalem.

“We’d like to do that, bring them to Israel, take care of them in our hospitals, as we’ve done with thousands of Syrian civilians.”

Stoffel previously covered this story on February 18, 2014 in the following report: 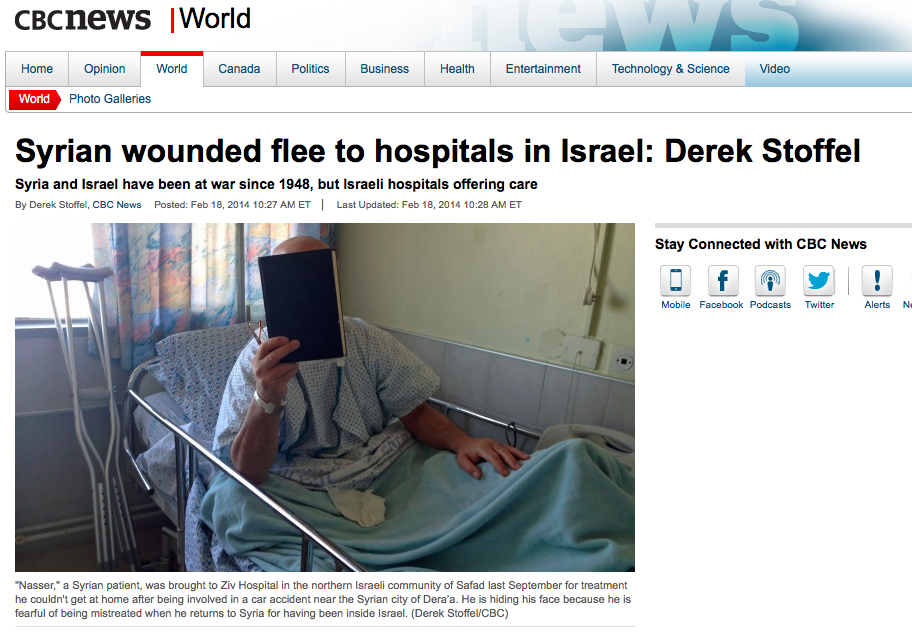 While mainstream news outlets regularly demonize Israel and ignore its humanitarian efforts worldwide, especially in disaster regions and areas of conflict, that our public broadcaster deployed its resources to cover this important story and that their Mideast bureau chief continues to acknowledge how Israeli humanitarian efforts are a “small stone to building peace,” is to be commended. Please commend CBC Mideast bureau chief Derek Stoffel for his reporting on Israeli medical aid to thousands of Syrians. Send emails to: Derek.Stoffel@CBC.ca and Tweet thanks to @DerekStoffelCBC.

Israel’s Diverse Coalition – And Why It Matters...

Globe And Mail Refuses To Acknowledge That Israel...

UPDATED: After HRC Complaint, U of Saskatchewan Paper...

Left-Wing Media Engages In Out Of Control Israel...