UPDATED: Excuse Me CBC Q, Jerusalem is not a City of “Palestine” 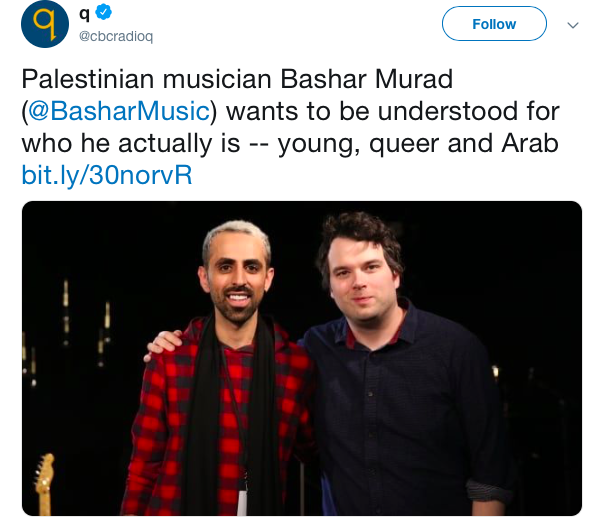 In response to HRC’s complaint, CBC News has adjusted its digital copy around the segment with Mr. Murad, to correct the reference of “Palestine” to the “Palestinian Territories.” As well, CBC amended its interview to mention the following:

Note: In the segment, Murad refers to “Palestine.” Our CBC Language policy, states there is no modern country of Palestine, although there’s a movement to establish one as part of a two-state peace agreement with Israel. Areas under the control of the Palestinian Authority are considered Palestinian territories: Fatah-run West Bank and Hamas-run Gaza Strip.”

Here is the response we received from CBC Q on May 21:

Thank you for your email of May 16, addressed to Paul Hambleton, CBC Ombudsman, concerning our musician interview on q, with musician Bashar Murad. Since q is my responsibility, I have been asked to reply.

First of all, thank you for taking the time to listen and to voice your concerns to us. We entered into that conversation with Bashar Murad carefully as we wanted to ensure that this was an interview about his music as that was his reason for being in Canada.

As you mention it is fine for Mr Mural to consider himself to be a Palestinian artist, and that is, in fact why he was in Canada, specifically to talk about Palestinian music and to meet with musicians and the industry here.

Our program is an arts, music and entertainment program and as such, we were not looking for a political discussion around the challenges Murad indicates with the security issues and restrictions he mentioned. When that was raised, our host moved to the challenges of being a travelling musician anywhere, and steered the conversation back to music again.

In the end of the piece we did identify him as a Palestinian musician living in Jerusalem. Both of these are legitimate and truthful ways of describing who he is, and in keeping with our focus on him as a musical guest,

As our program is not political by nature, and we also know that our audiences shift daily, we are unable to revisit the subject on air until such time as we consider repeating the piece. Should we ever repeat the segment, we will definitely include an intro and extro that more explicitly describes the situation.

We have however adjusted our digital copy around the segment, to correct the name to the Palestinian Territories. The copy is pasted below.

Thank you again for taking the time to voice your concerns. If another situation arises that touches on Israel-Palestinian relations, we will keep your comments in mind.

It’s rather self evident that Israel considers Jerusalem to be its eternal and undivided capital city,  even though Palestinians also assert a claim to Jerusalem as their future capital. As far as the CBC is concerned though, its journalists have no problem with alllowing guests to assert unchallenged that Jerusalem is a city of “Palestine”.

At no time in the close to thirteen minute interview, did Mr. Power’s challenge Mr. Murad’s very inflammatory claim that Jerusalem is a part of “Palestine,” not Israel and that as a resident of Jerusalem, he claims he’s “from Palestine” and that “he moved back to Palestine after college”.

We do not know where Mr. Murad resides, though presumably he lives in the eastern portion of Jerusalem. It’s perfectly fine for Mr. Murad to consider himself to be a Palestinian artist, though he is likely an Israeli-Arab resident of Jerusalem.

CBC, should not be a party to the deligitimization of Israel’s capital city of Jerusalem and to perpetuating the falsehood that Jerusalem is a city of “Palestine”.

Furthermore, in the interview, Mr. Murad described various barriers of movement for Palestinians as a result of the Israeli “occupation”. Mr. Murad spoke of:

In the interests of balance and fairness, Mr. Power should have acknowledged Israel’s security concerns in the face of relentless Palestinian terror which necessitated various security measures to safeguard the lives of Israeli civilians.

To right this wrong, HonestReporting Canada has asked CBC Q produce a forthcoming segment which:

We await the CBC’s reply to our concerns. Watch this space for future updates. If you would like to communicate your concerns to CBC Q, please contact the program directly. Send a message to Q on Facebook or Twitter.