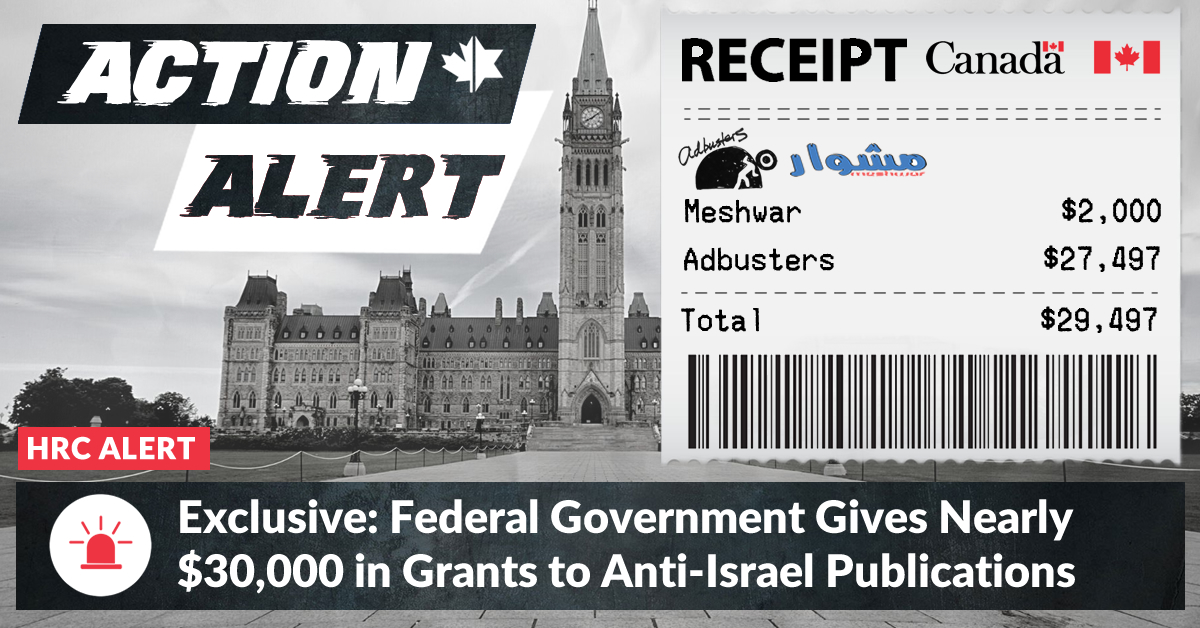 Following HonestReporting Canada’s complaint and alert, the Ministry of Canadian Heritage has confirmed that an investigation is being conducted into how 2 anti-Israel publications secured close to $30,000 in grants.

We appreciate the speedy response by Minister Rodriguez and MP Housefather and the reaffirmation of Canada’s commitment to oppose antisemitism in all its forms.

We await the results of the Government of Canada’s investigation.

Thank you @pablorodriguez for agreeing to launch a review of these grants made to anti-Israel publications and for reaffirming yours, @CdnHeritage and @Canada’s opposition to antisemitism. https://t.co/eNaovIOysM

Marouf is a Beirut-based founder and employee of the Community Media Advocacy Centre (CMAC), which bills itself as having the mission “to disrupt settler colonialism and oppression in the media.” Marouf’s social media was rife with anti-Israel propaganda and antisemitic hate, and thanks to investigative work conducted by media consultant Mark Goldberg and journalist Jonathan Kay, it was revealed that Marouf’s organization had also been the recipient of significant federal funding.

Soon, widespread condemnation of Marouf’s hate erupted, his Twitter profile was removed and the federal government ceased funding his organization.

Despite the defunding of CMAC, an exclusive HonestReporting Canada investigation reveals that the federal government has funded other deeply problematic anti-Israel publications.

According to a 2021 report compiled by Canadaland.com entitled: “Which Media Benefitted From The Trudeau Government’s Covid-19 Funds?” there are at least two media outlets with extensive history of publishing anti-Israel, and in our view, antisemitic propaganda, who have received Covid-19 related relief payments from the federal government between 2020 and 2021.

Mississauga-based Arabic-language newspaper Meshwar Media received $2,000 from the federal government according to the dossier.

As documented by HonestReporting Canada multiple times in recent months and for over a decade, Meshwar Media has repeatedly delved into spreading hateful anti-Israel and antisemitic content. In fact, Meshwar is so hateful that several complaints have been filed with police hate crime authorities in Peel Region due to its anti-Jewish content.

In August 2022, Meshwar published an article on its website, written by Editor Nazih Khatatba, where he claimed that the Israeli Mossad agency committed the massacre of 11 Israeli athletes during the 1972 Olympic games in Munich, Germany. In reality, the perpetrators were members of the Palestinian terrorist group Black September.

Also in August, Meshwar’s Editor uttered the antisemitic dual loyalties slur when he accused Jews of being more loyal to Israel, or to the alleged priorities of Jewish people worldwide, than to the interests of their own nations. In the same month, Meshwar published a cartoon depicting Jews as greedy and cheap. In January, Meshwar published a column calling for Israel’s destruction.

In 2021, Meshwar’s editor mourned an arch-terrorist from the outlawed Popular Front For The Liberation of Palestine (PFLP). In 2018, Meshwar published an article that glorified Palestinian suicide bombers. In 2015, Meshwar compared Israeli leaders to neo-Nazis and said that the Zionist-Masonic movement is behind ISIS. Also that same year, our organization took Meshwar to task for labelling Judaism as a terrorist religion and saying that killing is ingrained in the Jewish faith.

In 2014, Meshwar Editor Khatatba denied that the Holocaust necessarily took place. “Why the Palestinian, any Palestinian, has to announce his ‘belief’ in the Holocaust of the Jews, and why should we accept it as truth,” Khatatba wrote at the time. Also that year, Meshwar published an article that praised a massacre of a Jerusalem-area synagogue where four rabbis and a police officer were murdered.

In his personal capacity, Khatatba just this month wrote on his Facebook page a post praising Uday Tamimi, a Palestinian terrorist who murdered an 18-year-old Israeli woman in a terrorist attack before later being killed while trying to commit a subsequent attack.

In his Facebook post, Khatatba wrote that he wished “Glory and eternity to the martyr Uday Al-Tamimi (22 years), the perpetrator of the Shuafat attack on October 8.”

On October 23, Khatatba posted a video to Facebook which promoted the lie that Jews are plotting an international conspiracy of world domination, and which included a clip of Nazi leader Adolf Hitler as proof of this claim.

These are only a small selection of the hate and propaganda posted by Meshwar Media and its editor, and all of this could have been discovered by the parties responsible for vetting any recipients of federal government grants.

Meshwar’s funding from the federal government was a drop in the bucket compared to the $27,497 received by Adbusters, a magazine based in Vancouver.

Adbusters, which describes itself as “a global collective of writers, artists, designers, musicians, poets, philosophers and punks,” also has a long history of anti-Israel fixation and of publishing content which has been accused of antisemitism (see here and here) for comparing Israelis to the Nazis and for publishing a list of influential neo-conservative U.S. policymakers and placing an asterisk next to the Jewish names.

In its August 2 edition, the magazine published content which insinuated that Israel was somehow controlling the international news media when it referred to “the Israeli state and its media toadies.” In the same article, it claimed that Israel was responsible for “75 years of occupation, oppression and apartheid.” That date stretches back to before Israel’s independence in 1948, making a clear and unmistakable point that it was denying that the Jewish State had a right to exist at all.

Only a few months prior, Adbusters was wallowing in the depth of moral relativism when it published a visual image which compared Marwan Barghouti, the convicted Palestinian terrorist, with the late Nelson Mandela, South African anti-apartheid icon.

In both the case of Meshwar Media and Adbusters, the grotesque anti-Israel – and in our view, antisemitic content – was readily available and documented, but still both publications were awarded grants from the federal government under the Canadian Heritage ministry, taken from taxpayer dollars.

In a letter sent by HonestReporting Canada to Pablo Rodriguez, Canada’s Minister of Canadian Heritage, we have called on the federal government to unambiguously disassociate itself from these two publications and to ensure that Adbusters and Meshwar do not receive future funding from the Government of Canada. We’ve also called for an investigation to be conducted to look into the entire process for how these outlets came to be approved in the first place, which is clearly lacking meaningful due diligence and proper vetting protocols. We await the Federal Government’s response to our concerns.

It seems to me that the publishers of both of these hateful scribblings suffer from dual loyalties……are they interested in a better Canada or are their loyalties to countries in the Middle East.