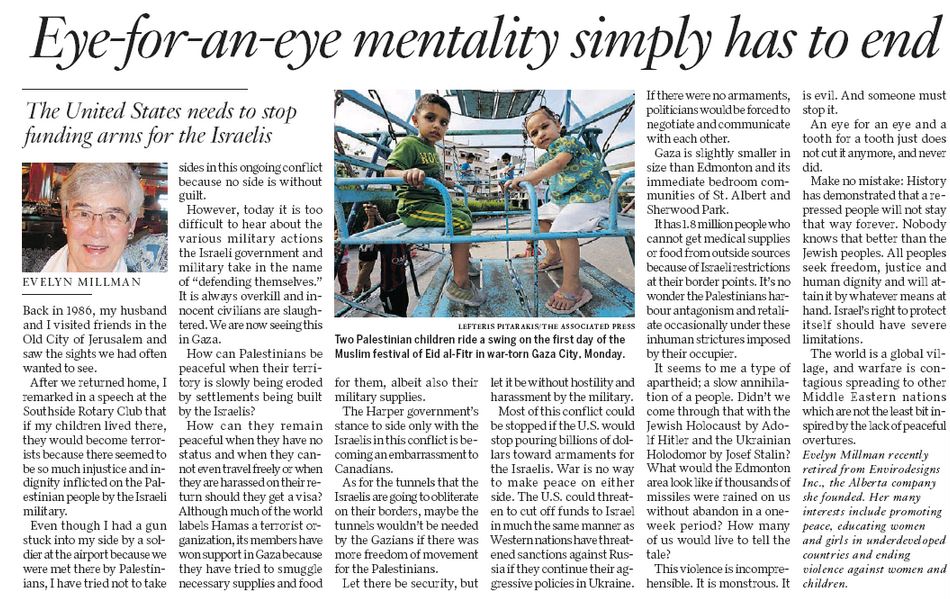 How can we reconcile the fact that Evelyn Millman, someone who claims to promote peace, failed in her July 30 Edmonton Journal op-ed to condemn Hamas for its unabashed terror war against Israelis and its avowed efforts to wipe Israel from the map and annihilate world Jewry? Efforts supported by Iran, with both rhetoric and substance in the form of hundreds of millions of dollars of weapons and cash to support salaries for terrorists; and when Iran’s supreme leader this week called on Muslims from around the world to help arm Gaza Palestinians in their fight against Israel.

Instead, Millman levelled exclusive censure and opprobrium at the Jewish state, and yet, Hamas has fired over 2,000 rockets at Israel in recent weeks and close to 20,000 this past decade. Each rocket or mobile bomb, is packed with shrapnel and nails in an attempt to murder an innocent human being. Even the Palestinian Representative to the UN said Hamas rockets constitute “crimes against humanity” but nary a peep of criticism by Ms. Millman. Hamas’ war crimes have been documented by the United Nations itself along with Canadian and international journalists who saw its operatives dress in disguises as non-combatants, and when they hid their weapons and embedded terrorists in Palestinian civilian areas (hospitals, schools, mosques, etc.) and fired towards Israeli cities, a bonafide double war crime. Journalists who expose Hamas’ human shield practices are now a target for Hamas terror.

Would Ms. Millman condemn Hamas for the deaths of 160 Gazan children who died while building terror tunnels? Why no criticism of the fact that Hamas used 13- and 14-year-old Palestinian children by adorning them with explosives-laden suicide-bomber belts to attack Israelis? More Hamas child abuse is seen in how the terror group openly admits to giving Palestinian children grenades to throw at Israelis. Does Ms. Millman denounce Hamas for the summary executions of 40 alleged “collaborators” (20 of whom were really just peaceful protestors condemning Hamas’ efforts)? Importantly, multiple sources suggest that most of the Gaza casualties were likely Hamas fighters and Israel has done more to safeguard the lives of innocents than any other military in modern history. Whether through aborted attacks when civilians are in the vicinity; leafleting, texting, and warning Gazans of impending attacks encouraging them to leave the area, roof-knocking, etc.

Ms. Millman’s implied claim that Israel is trying to perpetrate a genocide of Palestinians akin to the Holocaust and the Holodomor is abhorrent, is without foundation, and is outright anti-Semitism. It’s appalling that Millman would draw a parallel between the murder of over six million Jews in the Holocaust to the strife existing today between Israeli and Hamas. By invoking the Holocaust, Millman has implicitly compared contemporary Israeli policy of defending itself against Palestinian terrorism to the Nazis efforts to exterminate world Jewry. Such comparisons go well beyond the pale considering that these statements fit the European Union, U.S. State Department’s and Ottawa Protocol’s working definition of anti-Semitism.

Millman makes this analogy to trump up libelous claims that Jews, who were once the victims of the Nazis during the Holocaust, are now the victimizers carrying out the “genocide” of Palestinians. These kinds of comparisons are not only ignorant and demonstrative of a deep-seated prejudice, but have been described as anti-Semitic in nature and a form of Holocaust denial.

Israel left all of Gaza in 2005, removing its soldiers and 8,500 settlers in an effort for peace. Israel even removed the bodies of dead Israelis in cemeteries there and left Gazans with over $15-million worth of innovative greenhouses, only to see them ransacked and destroyed. There is no occupation of Gaza and this territory could have been a flourishing economy, much like Singapore or the 2nd Dubai, but instead, Hamas chose to use all their resources to build a base for terrorism while its leaders live lavish lifestyles as multi-millionaires while regular Gazans are impoverished.

Even while facing an enemy trying to murder its citizens, Israel facilitates the transfer of hundreds of thousands of tonnes of aid (food, medicine, etc.) to help Gazans. In sharp contrast, Hamas has only fed its people a steady diet of incitement against Jews and indoctrination towards “martyrdom” via its official educational apparatus and media. Israel, on the other hand, setup a mobile field hospital to care for injured Palestinian innocents, many of whom have been killed or injured by the premature, misdirected, or intentional explosions of Hamas weaponry. Indeed, an errant Qassam rocket of Hamas’ knocked out a Gazan electrical grid which blacked-out electricity for over 70,000 people. Importantly, 25% of these rockets fell short of their intended target and killed Gazan civilians.

Who is Hamas? They are serial killers, plain and simple. There is a cure out there and it could be implemented immediately. Hamas simply has to accept the Quartet’s conditions of recognizing Israel, renouncing violence, and accepting previously negotiated agreements between Israel and the Palestinian Authority. As well, the area must be demilitarized and Hamas (and Palestinian society) need to recognize that violent means will not provide a resolution to their grievances. Peace can only come about through dialogue and compromise.

To share your views with the Edmonton Journal, please send letters to: letters@edmontonjournal.com