Economics Are Uniting Israel & The Arab World Together: HRC Asserts In Times Of Israel 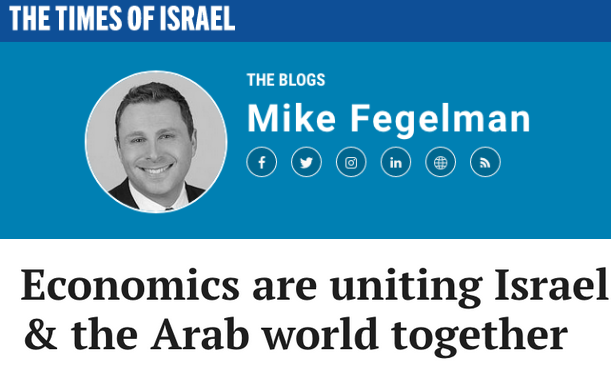 In our latest commentary published in the Times of Israel, HRC Executive Director Mike Fegelman asserted that: “Recent years have shown that the desire for peace with Israel in the Arab world remains high, and there is no question that Israel’s economic growth will be a continued driver in forging comprehensive Middle East peace.”

Read the full op-ed on the Times of Israel website, or as appended below.

For more than 40 years, Israel and Lebanon have been in an official state of war.

Although armed combat last took place in 2006, when Hezbollah, the Lebanon-based Shia Islamist terrorist group, launched thousands of rockets into Israel, tension nevertheless continues to exist between our two countries.

And although there may not be a peace deal on the horizon, economics are proving to be an effective way of bringing our shared interests together.

Israel and Lebanon recently signed a maritime agreement which would see energy exploration off their shared coastline, and a profit-sharing component, as well. This agreement between both countries represents only the latest example of the power of economic partnerships in the Middle East and beyond, especially as it relates to breaking down barriers between countries.

In 2020, Israel signed the Abraham Accords with Bahrain and the United Arab Emirates (UAE), and in just the last two years, economic ties between the countries have exploded.

Israel and the UAE signed a wide-ranging free trade deal in May of this year, with a stated goal of increasing trade from under $900 million USD to $10 billion USD within a decade. Already, this relationship represents the largest trade Israel has with any Arab country. Furthermore, tourism between the two countries has grown rapidly and private deals continue to develop.

With Bahrain, current trade with Israel totals only $7.5 million USD in 2021, but the two countries have recently entered free trade negotiation talks, and this figure is sure to grow significantly in the near future.

Earlier this year, high-ranking officials from Israel and Morocco met and committed to dramatically boost trade. After signing a peace deal in late 2020, economic possibilities abound, and as such, the two countries hope to quadruple mutual trade in the coming years.

Even in Saudi Arabia, which has no formal relations with Israel, economics are proving to be a great unifier. On October 27, Samer Haj-Yehia, the chairman of Bank Leumi, Israel’s largest bank, spoke at an investor’s forum in the Saudi capital of Riyadh on the topic of fintech (financial technology), marking one of the first times ever an Israeli has spoken publicly in the kingdom. This week, it was reported that Saudi Arabia wants to normalize ties with Israel. Saudi Minister of State for Foreign Affairs, Abdel al-Jubeir, recently spoke to senior American Jewish leaders and guaranteed that Israeli-Saudi normalization will happen eventually, but stressed that it will take time.

These developments should come as no surprise to observers.

Israel, despite its small size and modest population – smaller in land area than Lake Ontario and with roughly the same number of inhabitants as Quebec – nevertheless is a regional economic powerhouse, particularly in the field of technology. Dubbed the “Start-Up Nation,” Israel has the 3rd most companies listed on the Nasdaq, after the US and China.

Industry analysts have identified a number of reasons for this technological prowess. Part of the reason is certainly attributable to the focus on research & development (R & D) in Israel, which is the highest as a proportion of GDP in the world, but it may also be in part due to Israel’s paucity of natural resources, which has forced Israel to innovate in other ways.

Whatever the reasons, over the last 74 years since Israel’s independence, the Jewish State has become a model of economic stability and innovation, and the burgeoning growth of trade, especially with Arab countries, is just the latest result.

Recent years have shown that the desire for peace with Israel in the Arab world remains high, and there is no question that Israel’s economic growth will be a continued driver in forging comprehensive Middle East peace.