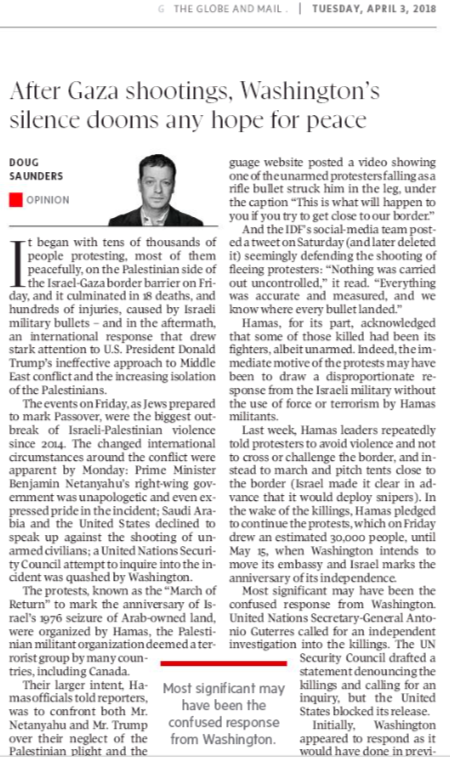 “After soldiers opened fire on the protesters with live ammunition as well as plastic bullets and other non-lethal ammunition, Israeli officials acknowledged that none of the protesters had attempted to cross the border barrier, and video of the incident did not show any armed protesters (some threw rocks, rolled burning tires and used slingshots, but the great majority were simply marching).”

Firstly, Saunders’ claim attributed to Israeli officials is without foundation. Israel has claimed that there were several infiltration attempts. As the Times of Israel reports: “Among the dead were two men who, armed with AK-47 assault rifles and hand grenades, opened fire on Israeli soldiers and attempted to breach the security fence in the northern Gaza Strip, before they were shot by IDF infantrymen and a tank, according to the army. The military later provided video footage of the attack from its surveillance cameras along the fence, as well as photographs of the weapons.”

Here is a video of an infiltration attempt courtesy of the Israel Defense Forces:

Moments ago, IDF troops thwarted an infiltration attempt by three terrorists in the northern Gaza Strip. The terrorists approached the security fence and attempted to infiltrate Israeli territory. In response, IDF troops targeted the terrorists with tank fire pic.twitter.com/unGS1x79Hg 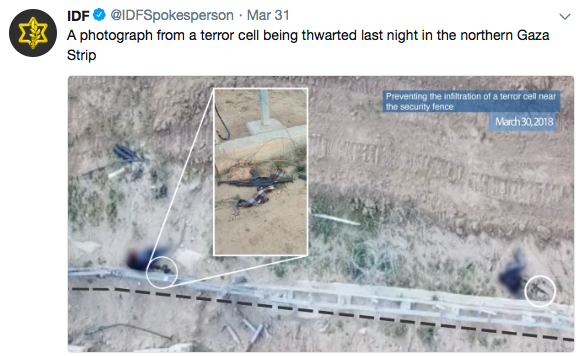 In truth, Palestinians did try to breach the border and several were armed per the video and image above. In light of this information, we filed a complaint with the Globe and Mail requesting that a correction be published immediately.