Don’t Ignore the Rise of Antisemitism in France: HRC Asserts in Sun Newspapers

Today, in an important commentary published in the Toronto, Ottawa and Winnipeg Sun newspaper, HonestReporting Canada rang the alarm bell about how France is allowing the state-sanctioned murder of Jews. We know this sounds like hyperbole, but it’s not!

Recently, France’s court of appeals ruled, unbelievably, that the brutal murderer of Sarah Halimi, a 65-year-old Jewish schoolteacher and doctor in Paris, cannot be held criminally responsible, because he, Kobili Traoré, was high on marijuana!

Justice systems are usually meant to protect minorities, but in this case and in a gross perversion of justice, the murderer was protected. 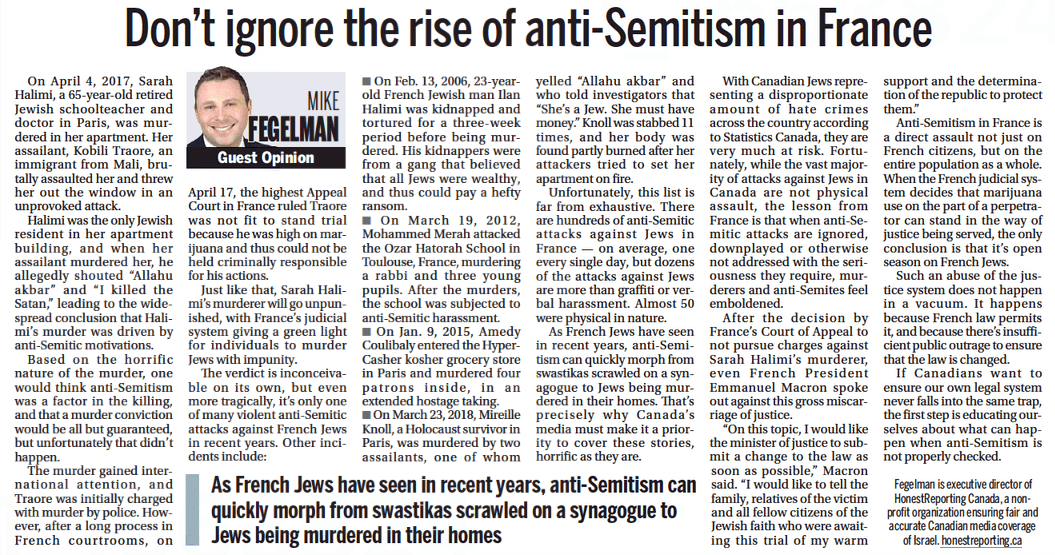 On April 4, 2017, Sarah Halimi, a 65-year-old retired Jewish schoolteacher and doctor in Paris, France, was murdered in her apartment. Her assailant, Kobili Traoré, an immigrant from Mali, brutally assaulted her and threw her out the window in an unprovoked attack. Halimi was the only Jewish resident in her apartment building, and when her assailant murdered her, he allegedly shouted “Allahu Akbar” and “I killed the Satan,” leading to the widespread conclusion that Halimi’s murder was driven by antisemitic motivations.

Based on the horrific nature of the murder, one would think that antisemitism was a factor in the killing, and that a murder conviction would be all but guaranteed, but unfortunately that didn’t happen.

The murder gained international attention, and Traoré was initially charged with murder by police. However, after a long process in French courtrooms, on April 17, the highest appeals court in France ruled that Traoré was not fit to stand trial because he was high on marijuana and thus could not be held criminally responsible for his actions.

Just like that, Sarah Halimi’s murderer will go unpunished, with France’s judicial system giving a green light for individuals to murder Jews with impunity.

The verdict is inconceivable on its own, but even more tragically, it’s only one of many violent antisemitic attacks against French Jews in recent years. Other incidents include:

* On February 13, 2006, 23-year-old French Jewish man Ilan Halimi was kidnapped and tortured for a three-week period before being murdered. His kidnappers were from a gang which believed that all Jews were wealthy, and thus could pay a hefty ransom.

* On March 19, 2012, Mohammed Merah attacked the Ozar Hatorah School in Toulouse, France, murdering a rabbi and three young pupils. After the murders, the school became subjected to antisemitic harassment.

* On January 9, 2015, Amedy Coulibaly entered the HyperCasher kosher grocery store in Paris and murdered four patrons inside, in an extended hostage taking.

* On March 23, 2018, Mireille Knoll, a Holocaust survivor in Paris, was murdered by two assailants, one of whom yelled “Allahu Akhar” and who told investigators that “She’s a Jew. She must have money.” Knoll was stabbed 11 times, and her body was found partly burned after her attackers tried to set her apartment on fire.

Unfortunately, this list is far from exhaustive. There are hundreds of antisemitic attacks against Jews in France – on average, one every single day, but dozens of the attacks against Jews are more than graffiti or verbal harassment – almost 50 were physical in nature.

As French Jews have seen in recent years, antisemitism can quickly morph from swastikas scrawled on a synagogue to Jews being murdered in their homes. That’s precisely why Canada’s media must make it a priority to cover these stories, horrific as they are.

With Canadian Jews representing a disproportionate amount of hate crimes across the country according to Statistics Canada, they are very much at risk. Fortunately, while the vast majority of attacks against Jews in Canada are not physical assault, the lesson from France is that when antisemitic attacks are ignored, downplayed or otherwise not addressed with the seriousness they require, murderers and antisemites feel emboldened.

After the decision by France’s court of appeals to not pursue charges against Sarah Halimi’s murderer, even French President Emmanuel Macron spoke out against this gross miscarriage of justice.

“On this topic, I would like the minister of justice to submit a change to the law as soon as possible,” Macron said. “I would like to tell the family, relatives of the victim and all fellow citizens of the Jewish faith who were awaiting this trial of my warm support and the determination of the Republic to protect them.”

Antisemitism in France is a direct assault, not just on French citizens, but on the entire population as a whole. When the French judicial system decides that marijuana usage on the part of a perpetrator can stand in the way of justice being served, the only conclusion is that it’s open season on French Jews.

Such an abuse of the justice system does not happen in a vacuum. It happens because French law permits it, and because there’s insufficient public outrage to ensure that the law is changed. If Canadians want to ensure that our own legal system never falls into the same trap, the first step is educating ourselves about what can happen when antisemitism is not properly checked.