Did a Postmedia Cartoon Engage in Antisemitism?

On February 17, PostMedia editorial cartoonist Andy Donato penned the following caricature of Israeli Prime Minister Netanyahu and President Donald Trump that depicted Trump as a talking dummy – a puppet and Netanyahu as the ventriloquist puppetmaster, who hand-manipulates Trump with the pull of a string. The cartoon was published in several publications including the Toronto Sun, Ottawa Sun, and Winnipeg Sun.

Was cartoonist Donato implying, intentionally or not, that Israel controls American foreign policy, a classic Jewish conspiracy theory? Did his use of yellow Jewish Star’s of David (used by the Nazis to identify Jews) invoke Holocaust-era imagery? 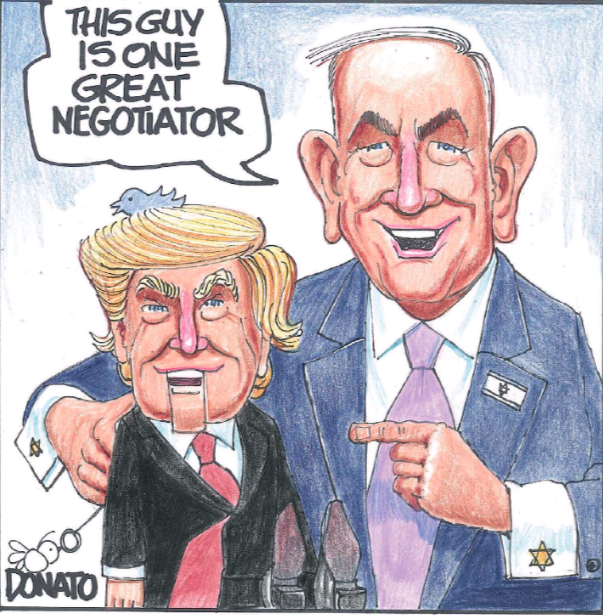 “Re: Donato cartoon, Feb. 17: I find it ironic on the same date Michele Mandel wrote an insightful column on anti-Semitism in Canada (“Combat hate here”), your paper also ran a political cartoon by Donato which I respectfully point out could be construed, however unintentionally, as being anti-Semitic. I appreciate political cartoonists should be free to criticize anyone and draw what they want. I get Donato felt the need to draw a cartoon repeating the over-used canards that Trump is a dummy and that Netanyahu and Israel are manipulative puppet masters of the U.S. However, what I do not get is why Donato chose to use the yellow Star of David as cuff-links for Netanyahu. Yes, I get it that Donato did not trust his audience to be able to know that he was depicting Netanyahu, thus his need for the Israeli flag lapel on Netanyahu’s jacket, but why the gold Star of David cufflinks? They have nothing to do with the State of Israel and as Donato is well aware, are the symbol the Nazis used to label Jews. So why would he depict them when referring to Netanyahu? Please, it may seem like a small thing for some, but is it possible to discuss Israeli politics without depicting Israelis or the state of Israel using Holocaust symbols?”

What do you think? Weigh in on the issue in our comment forum.