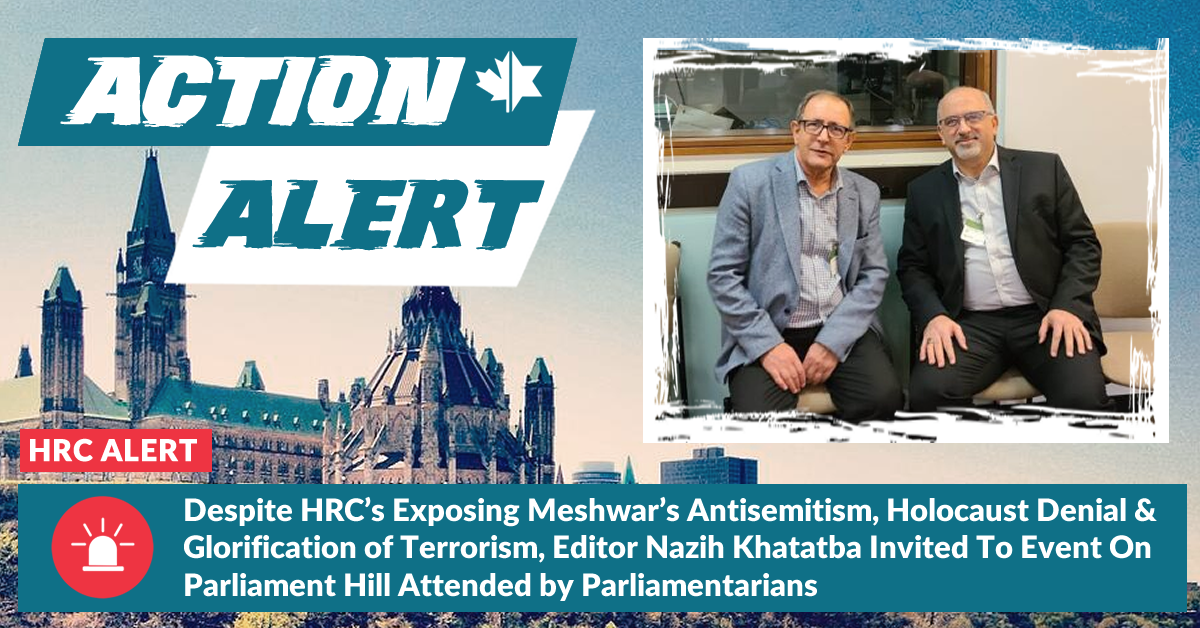 On November 29, The Canada-Palestine Parliamentary Friendship Group, which is chaired by Liberal MP Salma Zahid, hosted an event on Parliament Hill in conjunction with the “International Day of Solidarity with the Palestinian People”. 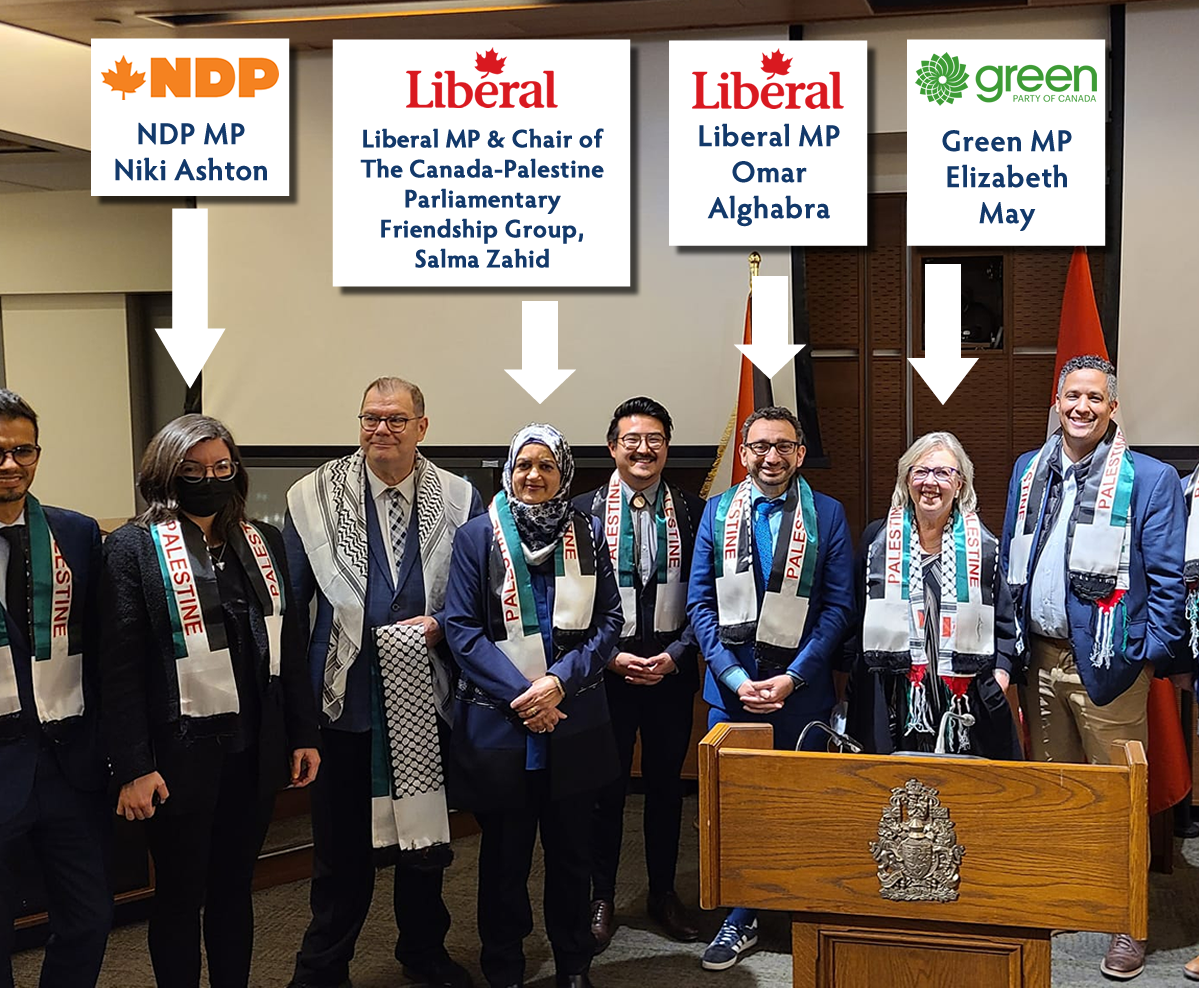 Also in attendance was Nazih Khatatba, Editor of the Mississauga-based Arabic-language newspaper Meshwar, which HRC has exposed as having engaged in Holocaust denial, antisemitism and who recently described terror bombings against Israelis – including a bombing that killed 16-year-old Canadian-Israeli Aryeh Shechopek – as beautiful. 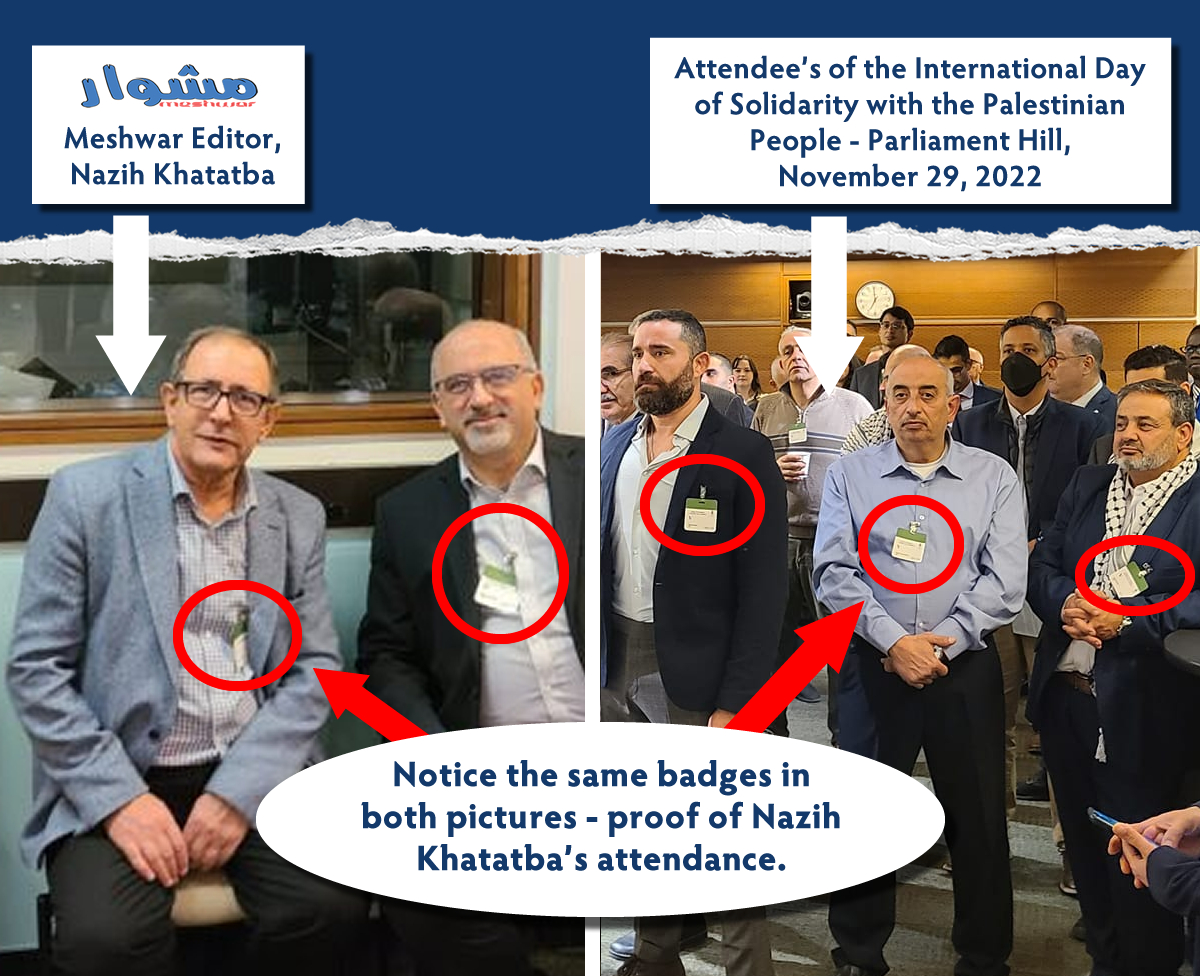 As documented by HonestReporting Canada multiple times in recent months and for over a decade, Meshwar has repeatedly delved into spreading hateful anti-Israel and antisemitic content. Recently, Meshwar was in the news on November 2, as HonestReporting Canada revealed that the paper received $2,000 in Federal Government Covid-19 Relief Grants.

In response to our alert, Liberal MP Anthony Housefather raised this issue with Heritage Minister Pablo Rodriguez  who confirmed that “The department has launched a review of the grants in accordance with the rules of the program. Antisemitism has no place in Canada and we will always stand up against it.”

The issue was also raised in The House of Commons on November 4, as Melissa Lantsman, Member of Parliament for Thornhill and Deputy Leader of the Conservative Party, rose in the House of Commons to express her outrage that the grants were awarded to Meshwar.

Following a meeting held between HRC and the Ministry of Canadian Heritage, we can confirm that the federal government concluded its review and forced Meshwar to pay back the grant money it received in full, which the Ministry said that it had.

Meshwar Media has stated it was required by the Department of Canadian Heritage in November to return the $2000 it received because of antisemitic content it published. Its’ representatives have no place on Parliament Hill.

However, none of this seemed to have stopped Meshwar Editor Nazih Khatatba from getting an invitation and from attending this event on Parliament Hill, along with our elected Members of Parliament. On December 1, Melissa Lantsman, Deputy Leader of the Conservative Party, made this point in an address in the House of Commons:

Meanwhile, instead of condemning Khatatba and explaining how her parliamentry group’s event came to invite the notorious hate monger, MP Zahid cavalierly said (emphasis added): “The all-party Canada-Palestine Parliamentary Friendship Group hosted a reception for the International Day of Solidarity with the Palestinian People on November 29th. The invitation was circulated widely within the Palestinian community, and nearly 150 people attended. We are not able to research the history of every attendee.”

As of this writing, we take note that Conservative MP Larry Brock has issued a statement noting he was unaware of Khatatba’s attendance and who commendably condemned Meshwar’s editor for engaging in antisemitism, Holocaust denial, and for praising terrorism against Israelis, specifically children. Meanwhile, the Green Party issued a statement to the National Post who reported that the Green’s said Leader Elizabeth May “was not aware Khatatba was attending the event, saying that party leaders attend ‘all sorts of events’ and seldom have control over attendees. ‘I wholeheartedly denounce antisemitism but let me be clear once and for all: showing solidarity with Palestine isn’t antisemitism and neither is criticism of the state of Israel’s human rights record.’” This is the same Elizabeth May who at this same event said that “I take my marching orders from the permanent representative of Palestine to Canada.”

As well, Liberal MP Omar Alghabra also issued a statement condemning Nazih Khatatba’s offensive and antisemitic language, saying he should never have been invited in the first place and has committed to “continuing to call out antisemitism whenever he sees it”. Fellow Liberal MP Sameer Zuberi also condemned Khatatba’s remarks saying that “Antisemitism and Holocaust denial has absolutely no place in Canada. “.


Canadians need and deserve answers. Why was Nazih Khatatba, who is so blatant in his antisemitism, given an invitation and why would Khatatba be extended a welcome mat in our halls of government? The question remains, will all Members of Parliament ­– whether those who attended this event or not – forcefully condemn Nazih Khatatba & Meshwar’s antisemitism, its Holocaust denial, and its glorification of terrorism?