Banning President Trump, but turning a wilful blind eye to Iran’s Ayatollah Khamenei and to serial human rights abusers, despots and terror-enablers worldwide reeks of hypocrisy and of selective political bias. This is not about free speech and censorship, it’s about equal standards and making sure that online hate doesn’t turn into real-world violence.

The face of social media changed a lot recently. In the immediate aftermath of the riots in Washington, DC. by supporters of Donald Trump, social media platforms took important steps to combat incitement to violence.

In a blog post announcing the permanent suspension, Twitter wrote that it banned Trump’s account “due to the risk of further incitement of violence” stemming from his encouragement of protests. Within days, Twitter shut down more than 70,000 accounts, including those which spread election fraud claims and QAnon-affiliated conspiracies.

After years of doing little to combat rampant antisemitism, Holocaust denial and hate speech on their social media platforms, suddenly Facebook and Twitter have jumped at the chance to address the issue of oversight on their platforms.

And while it’s undoubtedly true that these private companies are allowed to determine which voices are allowed and which are banned, there’s a remarkable double standard at play. While Donald Trump’s voice, and others like his, have been silenced, there remain many dangerous extremist accounts which continue to operate uninterrupted. 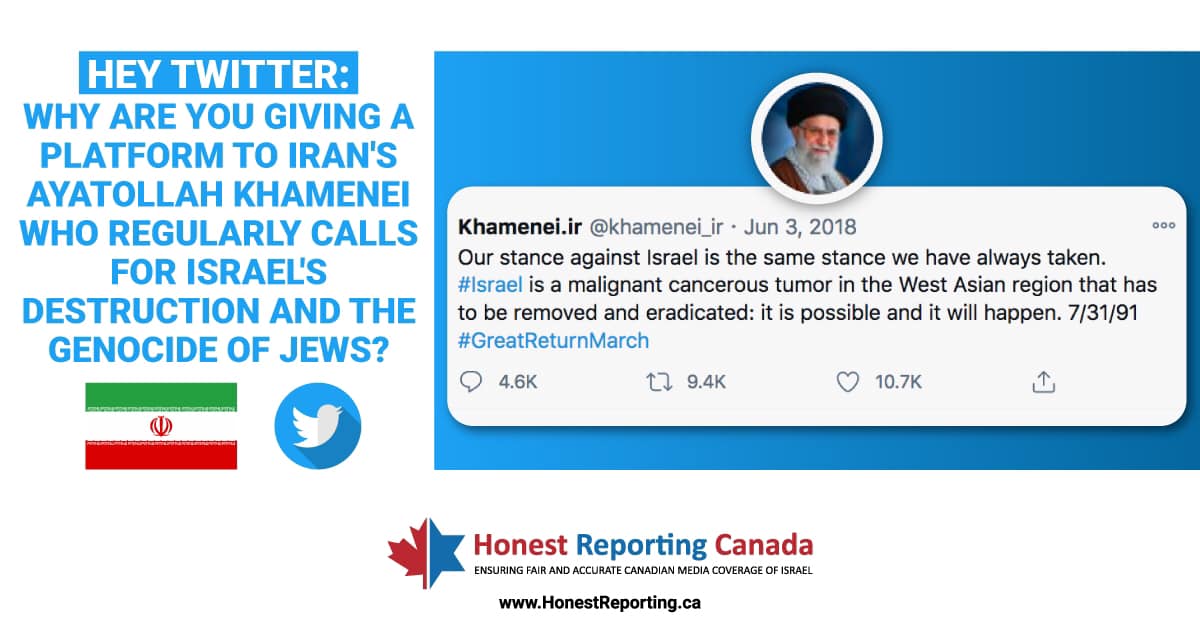 After years of complaints about antisemitism on Twitter resulting in seemingly little change, last summer saw a 48-hour grassroots boycott of the social media giant by Jews and non-Jews alike, under the hashtag #NoSafeSpaceForJewHate. The campaign was spurred into action by the antisemitic tweets of British rapper Wiley, who faced a suspension from Twitter, but whose comments were not removed.

As problematic as inaction on Wiley’s tweets was, there are accounts with much larger, more influential — and more dangerous — impact. For example, Ali Khamenei, the current Supreme Leader of Iran, with nearly a million followers on Twitter, has written that Israel is a “cancerous tumour” which needs to be “eradicated.” Following uproar and demands to remove Khamenei from the platform, Twitter CEO Jack Dorsey refused to suspend the Supreme Leader, arguing that as a public figure, it was important to maintain Khamenei’s public account and that Twitter’s rules were not being broken.

“We believe it’s important for everyone to hear from global leaders, and we have policies around world leaders,” Dorsey told the US Congress in October in a virtual hearing. “We want to make sure we are respecting their right to speak and to publish what they need.” For Twitter, Khameni’s calls for the genocide of Jews, Israel’s eradication and America’s demise was mere “sabre rattling” and was therefore deemed acceptable “commentary on political issues of the day.”

In October, after an Islamist terror attack in the French city of Nice, another world leader, former Malaysian Prime Minister Mahathir Mohamad, posted on his Twitter account that Muslims around the world had a right to be angry at France for its colonial past, and thus were justified in feeling that they had a right “to be angry and kill millions of French people for the massacres of the past.” Outrage soon ensued, and complaints were lodged at Twitter for Mohamad’s post, and it was soon taken down, but his account remains active, with currently more than 1.3 million followers.

Not a day goes by where the Chinese Communist Party doesn’t use Twitter to justify its genocide of Uyghur Muslims. Meanwhile, Vladmir Putin’s Russia, best known for poisoning opposition leaders, uses social media to threaten and intimidate dissidents. Likewise, Turkey’s Recep Tayyip Erdogan, whose regime arrests, jails & persecutes human rights activists, journalists, and dissidents, has unfettered access on various social media platforms. Not to be outdone, Venezuelan dictator Nicolás Maduro, a man who has literally starved his people to death, uses social media like a megaphone for repression.

Clearly, there’s a problem with hate speech and incitement on social media platforms that needs to be immediately addressed. If social media giants decree that Donald Trump’s posts on alleged election fraud and the January 6 protest-turned-riot are dangerous, then they have every right to remove the posts in question. But to remove an entire account seems to be using a hammer where a scalpel may be more effective. After all, that’s exactly what they have done with other accounts in question, which have spouted antisemitic conspiracies, Holocaust denial, or other forms of hate speech and incitement.

In general, there must be objective standards to which social media companies adhere to when it comes to online hate speech and incitement to violence, and they must be consistently applied. To selectively pick and choose when to enforce temporary suspensions, post removal, or permanent bans, is to continue to allow extremely dangerous voices to spout their propaganda to millions of followers around the world.

Banning President Trump, but turning a wilful blind eye to Iran’s Ayatollah Khamenei and to serial human rights abusers, despots and terror-enablers worldwide reeks of hypocrisy and of selective political bias. This is not about free speech and censorship, it’s about equal standards and making sure that online hate doesn’t turn into real-world violence.