On October 25, HRC contacted editors at the Canadian Press, the Toronto Star, CTV News.ca and CBCNews.ca pointing out that their coverage of the death of Toronto-born Rabbi Howie Rothman – who died of his injuries this week after being stabbed by Palestinian terrorists at a Jerusalem synagogue in 2014 – failed to mention that the attackers were Palestinian terrorists.

As we told these news organizations, while the coverage mentioned that Rabbi Rothman was “stabbed” by “two attackers” in a Jerusalem synagogue, it did not mention that the assailants were Palestinian terrorists. Failing to mention this vital information had the potential to mislead readers into thinking that the Rabbi died in violence potentially between Israelis exclusively and that this incident was not a terror attack, whereas in fact, it was.

After our intervention, these reports were amended to reflect the fact that the assailants were Palestinians. 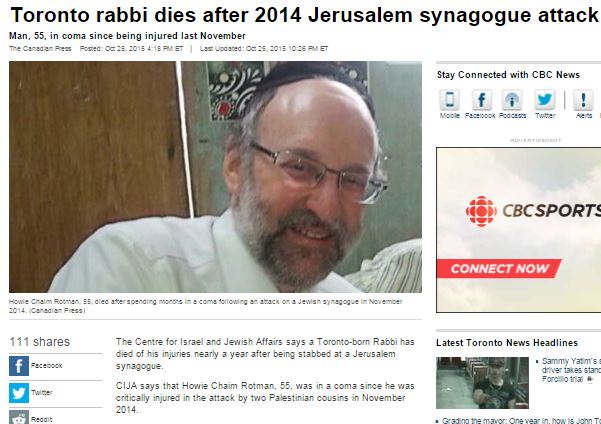