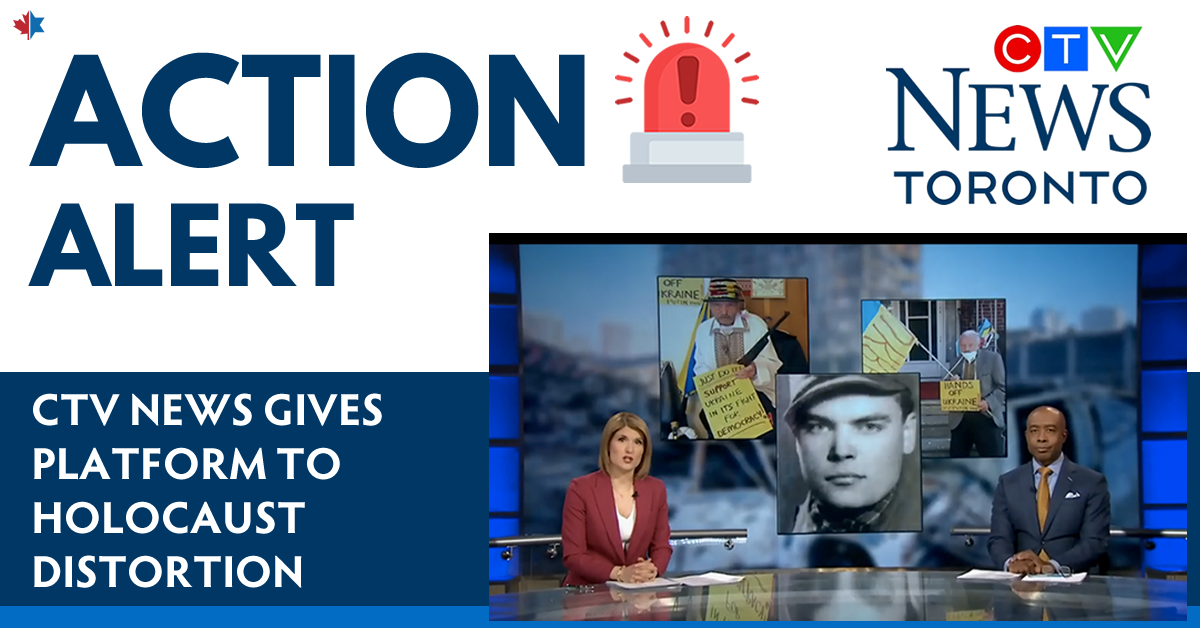 According to the International Holocaust Remembrance Alliance (IHRA), Holocaust distortion occurs when individuals engage in “trivializing or honoring the historical legacies of people or organizations complicit in the crimes of the Holocaust.”

Alarmingly, on March 30, CTV News Toronto broadcast a report by journalist Sean Leathong about a former Ukrainian soldier, now a 97-year-old living in Canada, who says he saw the echoes of the battle he fought in WWII, as he watched the news of the Russian invasion of Ukraine.

Watch the report in full immediately below:

Leathong reported that: “(John) Riopka fought for a Ukrainian division under German leadership called Galicia. They were relentlessly shelled by the Russians at the Second Battle of Brody in Western Ukraine, summer 1944.”

The report notes that Riopka wears a pin on his lapel, which Leathong describes as being just below “a medal he received for fighting in the Second World War.”

The Ukrainian division called the Galicia unit fought alongside the Germans against the Russians as part of a unit of collaborators that were complicit in the German conquest of Ukraine, which at the time of the war, held one of the largest population of Jews in Europe.

This Ukrainian division has been in the news recently as Jewish groups are calling for the removal of statues honouring Nazi collaborators from local Canadian cemeteries.

While scholars are still researching the scale of the Holocaust in the Ukraine, it’s estimated that 1.5 million Jews were murdered there, many by mobile killing squads called the Einsatzgruppen, that were led by Germans, but which also included Ukrainian collaborators.

While the history of the region is complicated, in our view, CTV should be more careful when spotlighting organizations complicit in the crimes of the Holocaust. Please send your concerns directly to CTV News at: programming@ctv.ca and refer to CTV News Toronto’s March 30 report by Sean Leathong, who can be tagged on Twitter at @CTVSean.