HRC has called on CTV News to publicly atone for presenting anti-Israel activist Joe Catron as an objective “freelance journalist” in an interview it produced and broadcast on July 11. See our complaint immediately below and watch the interview embedded in the letter:

I hope this note finds you well. I am writing to bring our concerns to your attention regarding an interview CTV News Channel aired this past Friday July 11 at 1:09pm EST with Mr. Joe Catron.

In an interview with Jacqueline Milczarek, Mr. Catron was described by CTV as a “freelance journalist” from Gaza several times, yet, he is far from that. Instead, he’s a hard-core anti-Israel activist. To view this interview please click here. 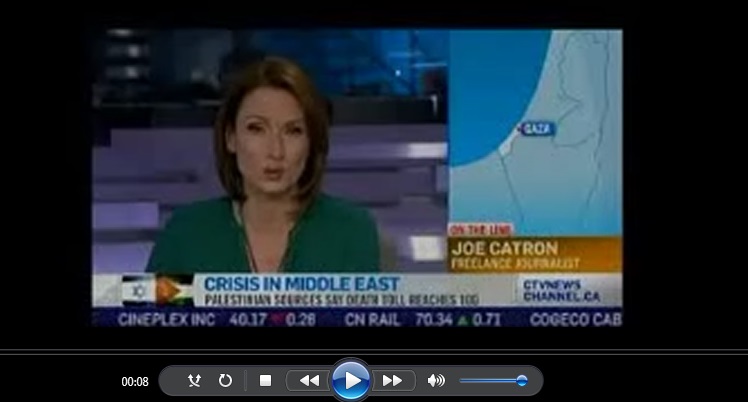 The website Mondoweiss notes the following about Catron: “About Joe Catron: Joe Catron is a US activist in Gaza, Palestine, where he works with Palestinian groups and international solidarity networks, particularly in support of the Boycott, Divestment and Sanctions (BDS) and prisoners’ movements. He co-edited The Prisoners’ Diaries: Palestinian Voices from the Israeli Gulag, an anthology of accounts by detainees freed in the 2011 prisoner exchange, blogs at joecatron.wordpress.com and tweets at @jncatron.”

Here’s Catron’s own personal website which shows that he’s a strident advocate of the Palestinian cause and is not a neutral and objective arbiter of the Mideast. Here, Catron is listed as a member of the International Solidarity Movement and a contributor to PalestineChronicle.com. Meanwhile, on Catron’s personal Facebook page, he links to abhorrent PressTV articles claiming Israel is dropping “cancer-inducing bombs in Gaza”. 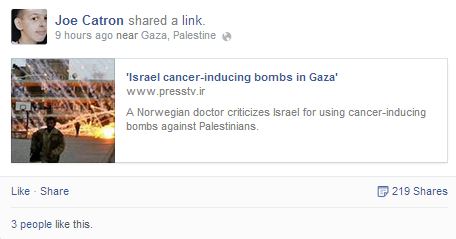 Here, for your information, is an interview Catron did on Press TV which is Iran’s state-funded news outlet.

Keep in mind, Catron accused Israel in this CTV interview of targeting a hospital in Gaza with “chronic” patients. When questioned about any Hamas activity at the hospital, he disputed Hamas’ presence at the hospital saying it’s simply a “health-care facility”. According to Catron in this CTV interview, there’s a consensus among Palestinians that Israel is the “aggressor” and that Palestinian rocket fire against Israel is legitimate resistance, a form of self defence. Given Catron’s background, the veracity of his claims cannot be guaranteed.

Indeed, a simple Google search of Mr. Catron would have revealed to CTV producers that he wasn’t a “freelance journalist,” but was a hard-core anti-Israel activist. CTV viewers were seriously misled by CTV’s description of him as a “freelance journalist” and we therefore call on CTV News to acknowledge its shortcomings in a forthcoming on-air statement.

I look forward to your reply.