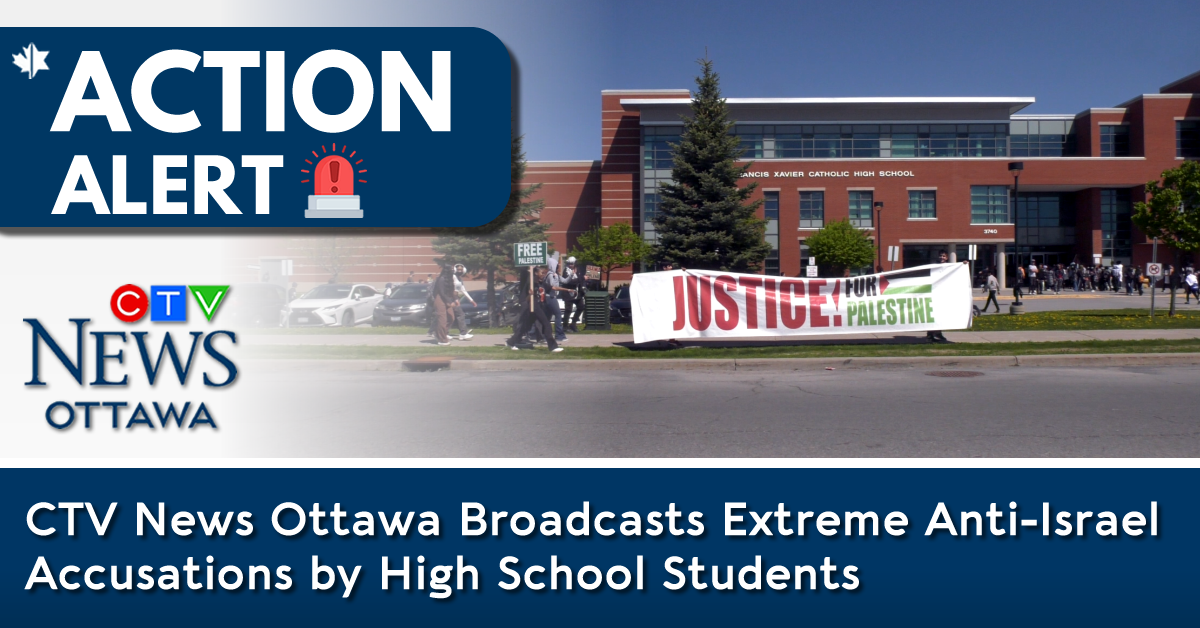 On the morning of Wednesday, May 18, a group of students in an Ottawa Catholic high school staged a walk-out protest against Israel.

The incident, which took place at St. Francis Xavier High School in Gloucester, a suburb of Ottawa, was covered by CTV News Ottawa in their online and broadcast news report, “Ottawa school students protest discrimination of Palestinian people.”

While CTV News Ottawa is entitled to cover any news item they deem appropriate, in this instance, the broadcaster allowed itself to be a platform for the dissemination of extreme anti-Israel disinformation.

For example, one of the protesters, Lana Alhumsi, a grade 11 student, told the news report: “I’m here to support the protest for Palestine. This is a really big thing for me because I have family affected in the occupation of Palestine.”

This claim of an Israeli “occupation of Palestine,” while frequently made by anti-Israel activists, is simply without merit.

It is unclear what land Alhumsi is referring to specifically in her assertion, but her claim serves to effectively dismiss three thousand years of Jewish history in the land of Israel and write it off as merely an “occupation.”

Within both Israel proper and Judea & Samaria (often called the “West Bank”), Israel possesses significant rights to the land under international law, in part because occupation only occurs when one state takes possession of another state’s land, but in the case of Judea & Samaria, it was never a part of any Arab state. Furthermore, what Alhumsi calls the “occupation of Palestine” is in reality, fictitious; there never has been any sovereign state called Palestine.

This claim went without any challenge or even context by CTV News Ottawa.

Unfortunately, there was another protester interviewed whose opinions were even more extreme and outrageous.

Jenna Mustapha, another grade 11 student, told the broadcaster: “I support Palestine fully. They’ve been through years and years of genocide and I think it’s really good for us as a school to be protesting because they don’t really get a lot of air, like nobody really knows what’s going on in Palestine.”

This claim, like Alhumsi’s, is egregious and demonstrably false.

According to the United Nations Convention on the Prevention and Punishment of the Crime of Genocide, genocide refers to “acts committed with intent to destroy, in whole or in part, a national, ethnical, racial or religious group…”

Even a cursory glance at demographics of the Palestinian Authority demonstrates how false this claim is. According to a 2013 report by the Palestinian Central Bureau of Statistics, by 2020, the population of Arabs in Israel and the West Bank was set to outnumber Jews in those same areas.

An updated 2018 report by the Palestinian Central Bureau of Statistics found that the Palestinian population in the West Bank and Gaza Strip had increased by a very robust 27 percent in the preceding decade.

Clearly, the continued numerical growth of Palestinians represents the polar opposite of a genocide, but Mustapha’s claim of an Israeli genocide of Palestinians is more than simply wrong; it is also dangerous revisionist history.

As quoted in a 2021 news report by the Jewish Telegraphic Agency (JTA), Israeli human rights lawyer Michael Sfard – who has written scathing critiques of Israeli government policy – said that Israeli actions vis-à-vis the Palestinians “doesn’t even begin to meet the threshold of what genocide is, and I think it cheapens the very important and grave concept of genocide.”

In other words, by accusing Israel of practicing genocide against Palestinians, when the Jewish State is decidedly doing no such thing, it serves only to mock the very real suffering endured by victims of genocide.

Additionally, by falsely accusing Israel, the world’s only Jewish State, of what is likely the most horrific and inhumane allegation possible – mass murder – Israel’s opponents are also spreading a libel against not just Israel, but against Jews as a collective.

“Specifically picking the crime the Jewish people have suffered, perhaps more than any other people in history, is not only to accuse us of a great crime but to negate our suffering as a people,” Professor Eugene Kontorovich, a scholar of international law, was quoted as saying in the JTA report.

While CTV News Ottawa has every right to cover this student walkout, but by failing to challenge, or at the very least, provide relevant context in the face of the extreme and false claims made by some of the student protesters, the broadcaster failed in its duty to provide fair and accurate reporting.