Following the issuance of this media action alert, our complaint sent directly to CTV News and the response of HonestReporting Canada’s subscribers who complained directly to CTV News website editors, CTV’s headline which had presented balloon bombs launched by Palestinian terrorists as party favours, has been amended.

CTV’s revised headline now acknowledges that the balloons were “incendiary”:

HonestReporting Canada thanks CTV News for its prompt corrective action and for its cooperation. 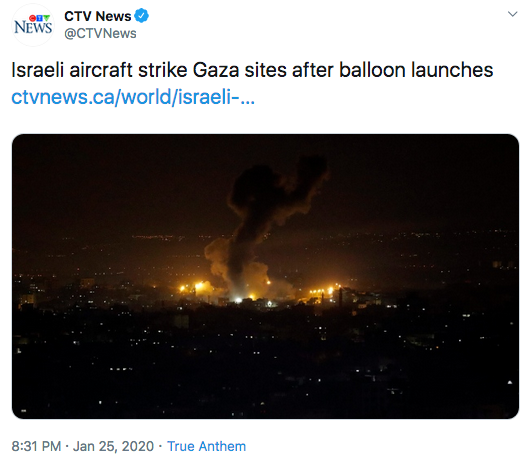 Untold in this headline, the Israel Defense Forces struck “militant” Palestinian sites inside Hamas-controlled Gaza as a result of the “incendiary” balloon bombs allegedly launched by the Hamas terror group. Israeli fighter jets didn’t carry out a military action simply because innocent balloons that you might use for party favours were launched. These bombs target innocents, specifically children and are designed to maim and murder civilians. For more information, please see the Times of Israel.