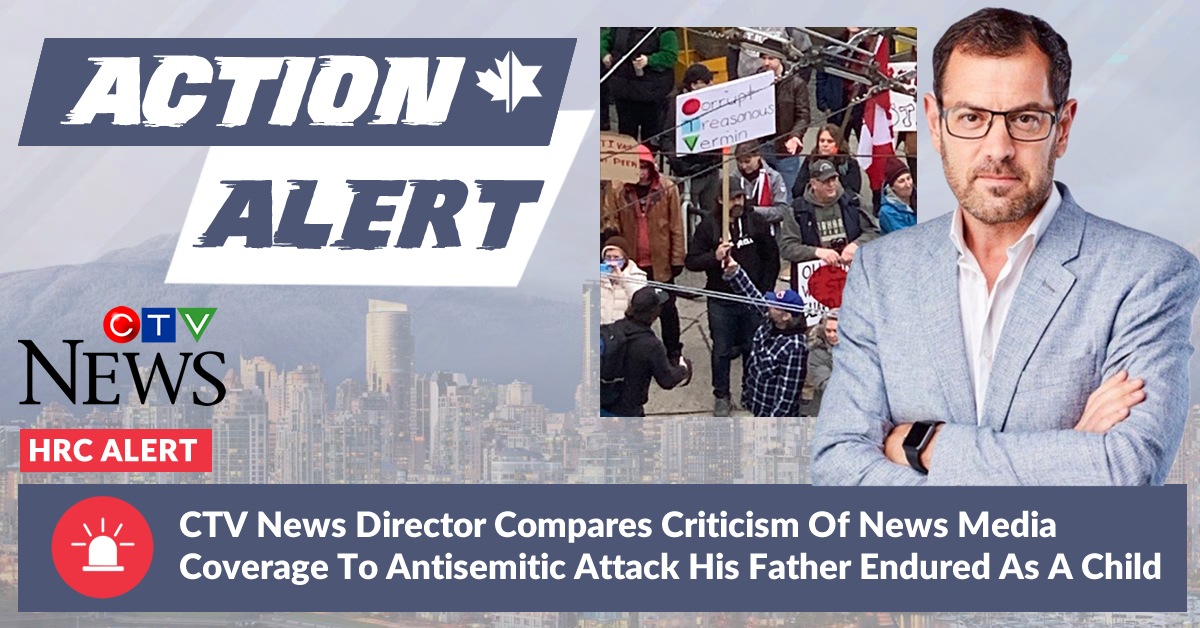 On January 1, Ethan Faber, the News Director for CTV News Vancouver, penned an opinion column on CTVNews.ca entitled: “We will not be intimidated: A New Year’s message from our newsroom,” where he vigorously defends his colleagues and the journalism profession in general against what he perceives as unfair attacks on reporters.

Citing a protest in Vancouver in early 2022 which was demonstrating against media coverage of the COVID-19 pandemic, Faber takes issue with the tone of the protest, mentioning activists who were comparing the news media to a virus, or vermin.

Faber expresses his particular dismay at this coarse language by discussing a traumatic experience his father endured as a child in the 1940s, growing up in Columbus, Ohio, when a group of bullies threw him down the sewer in what he saw as a clearly antisemitic attack.

To Faber, these two incidents – a 1940s antisemitic attack, and a 2022 protest against media coverage of the coronavirus pandemic – are part of the same theme, or as he puts it, “It was 2022 and hate had arrived at the front door.”

While Faber has every right to vociferously defend both his colleagues at CTV News Vancouver and those practicing the journalism profession more broadly, his tacit comparison of peaceful protesters, though employing language deemed uncouth by Faber, is hardly comparable to the brutal antisemitic attack by local thugs experienced by his father during the 1940s.

While those performing their job, including journalists, have the right to conduct their profession without fear of threats of violence, Faber has failed to explain how peaceful protesters holding signs is somehow reminiscent of a violent and cruel attack during the 1940s, a period when, across the Atlantic Ocean, the Nazis were murdering Jews throughout Europe on an industrial scale.

Though no doubt meaning to highlight the pain and struggles endured by victims of antisemitism like his father, Faber’s column failed to achieve this goal, instead only striking a note of tone-deafness and self-righteousness.

This cringeworthy comparison was not lost on a number of commentators online, including journalist Jonathan Kay, who posted on his Twitter account “please get over yourselves. You’re journalists being criticized, not Jewish freedom fighters in the Warsaw Ghetto uprising.”

Vivian Bercovici, who previously served as Canada’s ambassador to Israel, added her voice to the fray, asking Faber incredulously on social media, “Horrible story about ur dad. At that time my dad was in Europe. He survived. But u seem to be equating anti journalism sentiment with anti semitism. Have I misunderstood?”

By drawing a parallel between a gang who physically assaulted his father for being Jewish, and an ostensibly peaceful protest against news media coverage of a particular story, Faber is missing a fundamental point: that criticizing the actions of the Canadian news media is neither dangerous nor problematic.

In fact, while the news media’s role is to serve as the fifth estate, helping to hold elected officials accountable for their actions, reporters and journalists are fallible human beings who can also make mistakes, both individually, and as part of a larger system. And when mistakes happen, whether it’s a minor error or a more egregious, systemic issue, the news media deserves to be criticized. In fact, to do otherwise and let news media outlets off the hook and shield them from criticism would be doing a major disservice to the very society they are aiming to serve.

During the COVID-19 pandemic, tensions were running high, and many consumers of news media outlet were clearly unhappy with coverage of the biggest issue of the day. If Faber believes the criticism made against CTV News Vancouver is unfair, he has every right to advocate for the decisions made in his newsroom, and defend his record.

But to implicitly draw a link between an incident of hatred and Nazi-era violence to criticism – even if he believes it to be entirely invalid – is factually wrong. Furthermore, making this link is also morally wrong, because it serves to only downplay the very real trauma his father, and so many others like him, endured.

One can be grateful for Faber for sharing his father’s painful experience with antisemitism, but nevertheless recognize that he missed the mark in trying to tie it to an entirely unrelated circumstance.