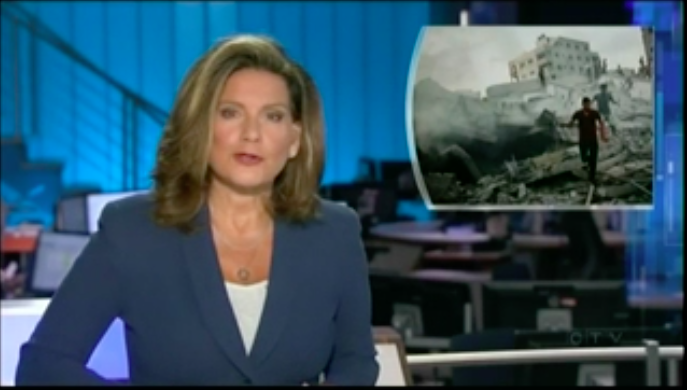 On behalf of our 30,000 subscribers, we called on CTV National News to issue an on-air corrective to remedy the erroneous and misleading statement it broadcast.

Anchor Lisa Laflamme falsely and unfairly stated the following (watch the report in full below or by clicking here):

After 24 hours of violence a ceasefire is now in effect along the Israel-Gaza border. Israeli aircraft bombed more than 150 targets in Gaza, flattening a major cultural centre and leaving three people dead. This came after Palestinians fired scores of rockets into Israel, including a long-range missile injuring at least seven people.”

In truth, Israel targeted and levelled a Hamas headquarters in the Gaza Strip. As the Times of Israel reports:

The five-story Said al-Mishal Cultural Center in Shati had been the headquarters for Hamas’ internal security forces. Palestinian media reported that nearly the entire structure was destroyed as Israeli aircraft fired multiple missiles.”

The five-story building, which is officially defined as a cultural center, was used by Hamas’s interior security unit, which is responsible for all security operations carried out inside Gaza and is considered to be an executive branch of Hamas’s political leadership. The building served as the office of active unit members. A significant part of the unit’s members are also Hamas military operatives.”

While Hamas may refer to it as being a “cultural centre”, the Israelis claim the building was used by terrorists to plan and execute terror attacks against Israelis.

The Israelis have said the following about the site: 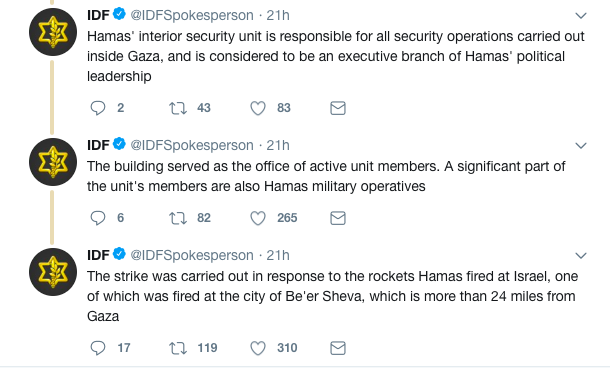 At the very least, CTV News has an obligation to its viewers to mention that Israel regards the building as being Hamas’ headquarters whose forces use it for military and terrorist purposes. Failing which, viewers will be left to wrongly conclude that Israel targeted a civilian building used to promote culture.

To some viewers, they may falsely conclude that Israel committed a war crime and had collectively punished innocent Palestinians in Gaza.

HRC has called on CTV News to broadcast a corrective notice which relays this information which wasn’t disclosed to its viewers, specifically that Israel targeted Hamas’ headquarters which are used for terror purposes, not a cultural centre. To send your considered comments to CTV National News, please email CTV President Wendy Freeman at: Wendy.freeman@bellmedia.ca.