In covering the death and funeral of Shimon Peres, yesterday evening on CTV National News, newly minted Ottawa Bureau Chief Joyce Napier inserted her personal opinion into what should have been a straight-forward objective news report about the life and legacy of Peres, by starting: “He (Shimon Peres) believed to the end in a two-state solution, but peace talks have collapsed and Israel’s hard-line government gives no signs of wanting to return to the negotiating table. Peres was the strongest voice for peace, with him gone, the question is who will hold the torch?”

Contrary to Ms. Napier’s claims, Prime Minister Netanyahu has been pleading for the return to direct face-to-face negotiations without preconditions with the Palestinians for many years, but has been continually rebuffed by his Palestinian counterparts, specifically, Palestinian Authority President Mahmoud Abbas. This is a matter of historical record. In fact, it’s the Palestinians who under Abbas’ reign, have shown no interest in wanting to return to the negotiating table. Abbas has instead pursued a policy of unilateralism, both at the UN and elsewhere in an effort to demonize Israel and protract the conflict. 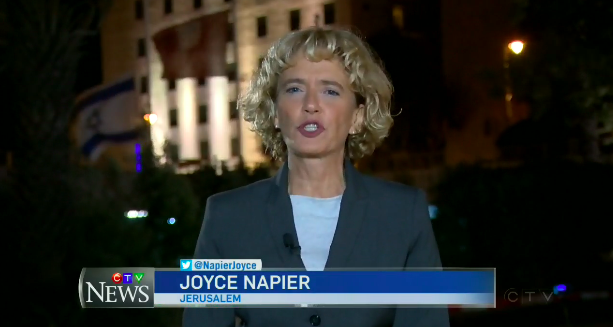 Ms. Napier’s disguising her personal opinion as news is completely offsides, and was also factually incorrect. There’s no foundation to Ms. Napier’s claim and it was highly objectionable for her to make this unfounded allegation against Israel which was compounded by the fact that it occurred in her coverage of the funeral of one of Israel’s greatest leaders. For Ms. Napier, it’s quite clear that she doesn’t believe that current Israeli Prime Minister Benjamin Netanyahu can carry the torch in being a Mideast peacemaker.
To remedy this serious journalistic infraction, HonestReporting Canada filed a complaint with CTV News President Wendy Freeman and called on CTV National News to broadcast an immediate on-air correction to set the record straight.
We await CTV’s reply to our complaint. To communicate your concerns to CTV directly, send emails to Wendy.Freeman@bellmedia.ca.