CTV News has the right to interview any guest of its choosing, yet of all the people and experts CTV could have interviewed on the sensitive topic of the European Union’s labeling of goods produced in Israeli settlements – one that Israel claims is inherently racist and discriminatory – CTV gave an undue platform to Professor Yakov Rabkin, an avowed anti-Zionist and author of the book “A century of Jewish opposition to Zionism”.

On November 13, CTV News Channel aired an interview with Anchor Dan Matheson and Canadian professor of history Yakov Rabkin. CTV News described the interview as follows and it can be viewed immediately below: “University of Montreal professor of history Yakov Rabkin joins us to discuss the growing tension between Israel and Europe after the EU decided to label goods made in Israeli settlements.”

Importantly, to deny the right of Israel to exist is tantamount to antisemitism, so says the Pope and US President Barack Obama to name just a few.

What this interview failed to properly address and contextualize is how the European Union’s decision to label goods made in Israeli settlements is a racist policy that bears all the hallmarks of antisemitic Holocaust-era practices where European Jews and their stores were branded with yellow stars.

The EU doesn’t recognize a sovereign government in disputed areas like Tibet, the Western Sahara, Kashmir, Northern Cyprus, and Crimea, to name just a few, but Israel is the only country in the world being singled out for politically motivated opprobrium. 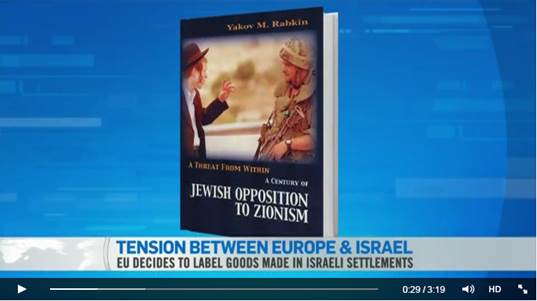 This fatally flawed proposition will not only hurt goods produced in Israel, but will imperil the jobs of over 30,000 Palestinians who are gainfully employed and have work insurance in the settlements.

This ploy of scapegoating Israel via the settlements is untenable and serves only to stigmatize Israel and demonize the Jewish state. Israel’s presence in these areas didn’t come about in a colonial conquest, but was the result of pan-Arab aggression in 1967.

Importantly, the EU’s efforts have only protracted the conflict, served to assault Israel’s legitimacy, and fanned the flames of hatred against world Jewry.

And CTV altogether failed to mention that Professor Rabkin is a member of an anti-Israel group, Independent Jewish Voices, see:

HonestReporting Canada has filed a complaint with CTV News President Wendy Freeman asking that CTV immediatly review this matter and remedy the situation. In the interests of balance, we also asked CTV to arrange for another interview source to be featured on an upcoming broadcast who can address Israel’s concerns about this sensitive topic, and to explain why the EU’s efforts are discriminatory and counter-productive to peace making.

To add your voice to our complaint, please contact CTV News President Wendy Freeman and express your concerns that CTV gave an undue platform to anti-Zionist professor Yakov Rabin on the EU labeling controversy. Send emails to: Wendy.freeman@bellmedia.ca.