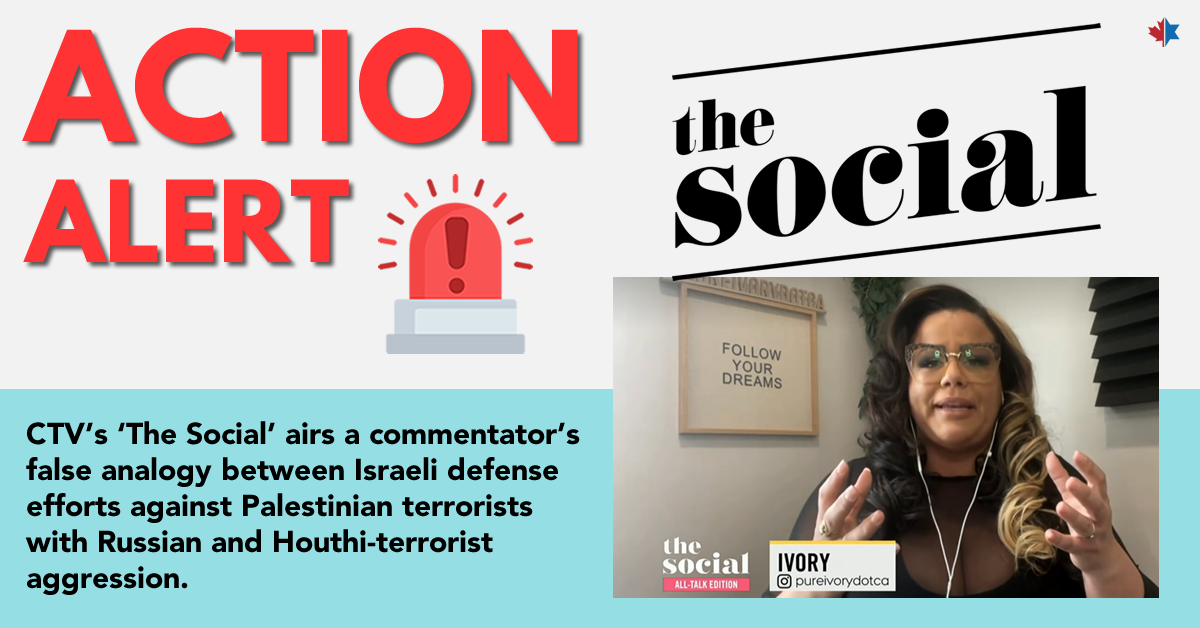 On Friday, February 25th, the CTV talk show The Social, produced a segment about how social media is being used and abused in the war in Ukraine.

One of the show’s guest commentators, a woman named Ivory described by CTV as a “multi-disciplinary performer, actor and model” exploited the war in Ukraine to justify spreading anti-Israel propaganda.

I think it’s a tricky situation because it’s weird to be in a world where everything is happening, to the moment online, but I wonder, why are we all mobilizing so quickly right now with Ukraine, like we should, but where was this kind of solidarity and where was this kind of media reception and social media reception when we had countries that weren’t predominantly white in very similar situations? Like where are these, you know, Facebook profile filters for Palestine? Where is this kind of mobilization and this global attention when everything was happening in Yemen? Right?  And my heart is breaking for the Ukranian people right now, and it’s horrific to watch this in real time, but you also have to sort of check your implicit biases and the biases of western culture where we’re all, all of a sudden on high alert because it’s Ukraine, but there’s countries who have been bombed and invaded for years and we’ve given them none of this solidarity.”

Watch the segment in full by clicking here or below:

Social media's role in the Russia-Ukraine war | The Social

Ivory’s equating Palestinian terrorists who seek Israel’s destruction to Ukrainians who are heroically fighting and repelling an illegal act of war by Russia, one of the world’s largest armies and a nuclear-armed one to boot, is odious.

Ivory drew a false analogy between Israeli defense efforts against Palestinian terrorists with Russian aggression and Houthi terrorist aggression. She insinuated that there was no big hullabaloo when Israel faced war from Hamas because Israel is, in her eyes, a predominantly white country. She also falsely claimed that “Palestine” is a sovereign country.

These comments were allowed to go unchallenged by the host of the segment, CTV Correspondent, Jessica Allen. In fact, Allen validated Ivory’s comments by saying: “That’s necessary to point out. Thanks for pointing this out Ivory.”

How are you feeling watching this conflict unfold via social media? Our panel shares their thoughts.

Importantly, Ukraine has not indiscriminately lobbed rockets and started wars with Russia. Ukrainian people have not committed endless terrorist attacks against Russia. Ukrainian people have not been digging  terror-attack tunnels under the Russian border, etc, etc, etc. These are all actions that Hamas and other Palestinian terrorists have unleashed against Israel in recent months and years.

Furthermore, Ivory’s insinuation that there was no big social media hullabaloo when Israel faced war from Hamas because Israel is, in her estimation, a predominantly white country, is an outright falsehood. Color has nothing to do with the conflict that Israel faces on its borders. Terrorists target the Jewish people and the Jewish state, irrespective of the dint of birth and skin colour of Israel’s citizenry. Jews come in all colour and when terrorists indiscriminately fire rockets at Israeli cities, Israel’s Arab and Muslim minority civilians are also in the crosshairs.

If you’re disappointed that CTV allowed this anti-Israel misinformation to go on air without challenge, send a complaint today to The Social by sending emails to Elysia Circelli, Manager, PR and Partnerships, at Bell Media: Elysia.Circelli@bellmedia.ca and to Cole Ferguson, Publicist, Bell Media Studios, Talent and Partnerships at cole.ferguson@bellmedia.ca. Please refer to The Social’s broadcast on February 25 and refer to Ivory’s exploiting the crisis in Ukraine to spread anti-Israel propaganda. On Twitter, please tag and tweet to @TheSocialCTV, @jessieraeallen and @PureIvorydotca. On Instagram, please tag @TheSocialCTV, @jessie_rae57 and @PureIvorydotca.