On March 13 at 3:25pm ET, CTV Anchor Angie Seth interviewed Farah Nabulsi, the Director of the pro-Palestinian propaganda film “The Present,” a film which as Nabulsi explains, portrays Israel as an “apartheid” state, which paints Israeli soldiers as brutes abusing innocent Palestinians, and which depicts Israeli security measures like “checkpoints” as a means of only inconveniencing Palestinians and violating their human rights.

Watch the segment below:

On what grounds did CTV producers find this interview about this British short fictional film nominated for a BAFTA to be newsworthy? There’s no Canadian connection whatsoever, no timely hook and one can only conclude that this segment was broadcast to tarnish Israel’s reputation.

With respect to the interview itself, no mention was made in the CTV interview about the unrelenting wave of Palestinian terror attacks that Israel faces on a daily basis. Whether rocket attacks, shooting rampages, knifings, kamikaze car rammings and suicide bombings. No mention was made of the over 1,000+ Israelis murdered and many thousands more who were maimed in these attacks in the 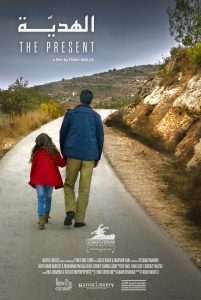 No mention was made about Israel’s need for security measures like checkpoints and Israel’s security barrier which is meant to safeguard innocent life on both sides of the Israeli-Palestinian conflict.

CTV’s Angie Seth said that “The Present” is a “beautiful film” and an “incredible short film” about love, happiness and desperation. “… it resonates, it will resonate among so many Canadians, so many news immigrants to this country, so many refugees.”

Nabulsi says the film is about the “basic human right about freedom of movement” that Israel denies due to its “military occupation and apartheid.” Nablusi says the film depicts present-day “occupied Palestine.”

Canadians can and should expect better from CTV News. At the very least, this interview should have raised the issues about Palestinian incitement and terrorism which prompted these Israeli security measures.