Criticism of Israel Does Not Constitute Antisemitism: HRC Asserts in Hill Times 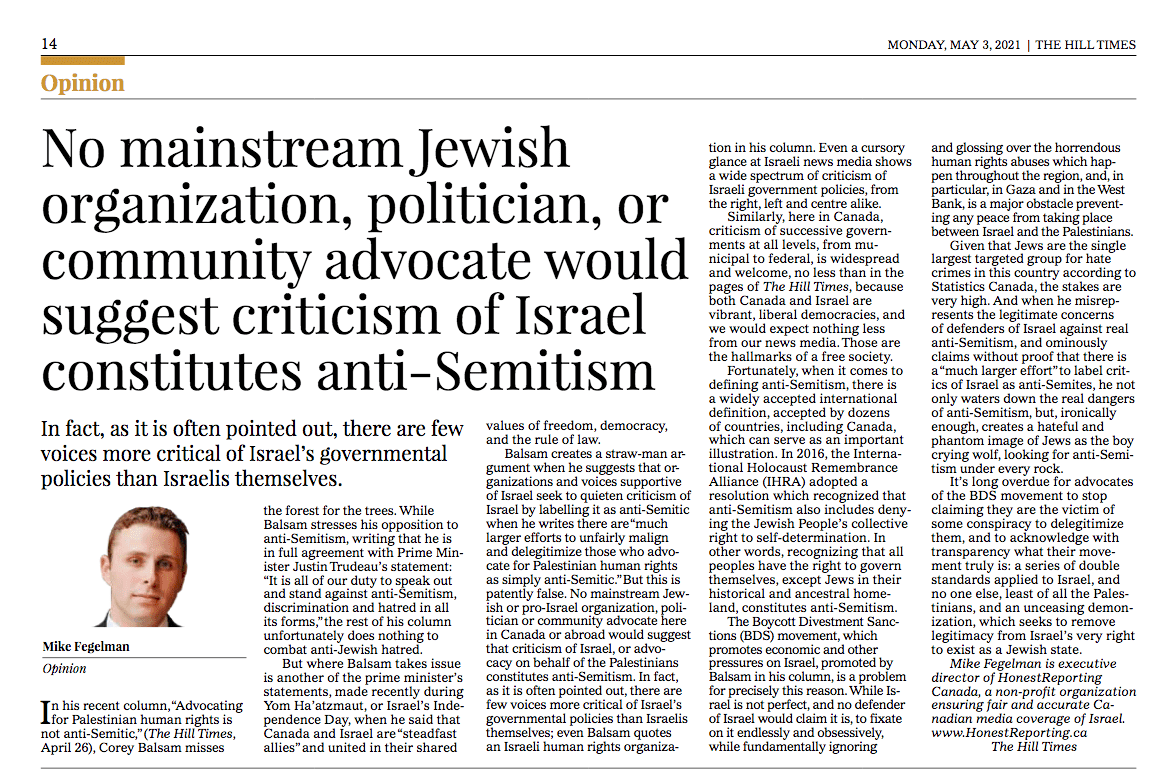 On Monday May 3, the Hill Times published HonestReporting Canada’s rebuttal commentary which argued that no mainstream Jewish organization, politician, or community advocate would suggest criticism of Israel constitutes Antisemitism.

Read our commentary in full appended below or on the Hill Times website (subscription required).

In his recent column, “Advocating for Palestinian human rights is not antisemitic,” (The Hill Times, April 26), Corey Balsam misses the forest for the trees. While Balsam stresses his opposition to antisemitism, writing that he is in full agreement with Prime Minister Justin Trudeau’s statement: “It is all of our duty to speak out and stand against antisemitism, discrimination and hatred in all its forms,” the rest of his column unfortunately does nothing to combat anti-Jewish hatred.

But where Balsam takes issue is another of the prime minister’s statements, made recently during Yom Ha’atzmaut, or Israel’s Independence Day, when he said that Canada and Israel are “steadfast allies” and united in their shared values of freedom, democracy, and the rule of law.

Balsam creates a straw-man argument when he suggests that organizations and voices supportive of Israel seek to quieten criticism of Israel by labelling it as antisemitic when he writes there are “much larger efforts to unfairly malign and delegitimize those who advocate for Palestinian human rights as simply antisemitic.” But this is patently false. No mainstream Jewish or pro-Israel organization, politician or community advocate here in Canada or abroad would suggest that criticism of Israel, or advocacy on behalf of the Palestinians constitutes antisemitism. In fact, as it is often pointed out, there are few voices more critical of Israel’s governmental policies than Israelis themselves; even Balsam quotes an Israeli human rights organization in his column. Even a cursory glance at Israeli news media shows a wide spectrum of criticism of Israeli government policies, from the right, left and centre alike.

Similarly, here in Canada, criticism of successive governments at all levels, from municipal to federal, is widespread and welcome, no less than in the pages of The Hill Times, because both Canada and Israel are vibrant, liberal democracies, and we would expect nothing less from our news media. Those are the hallmarks of a free society.

Fortunately, when it comes to defining antisemitism, there is a widely accepted international definition, accepted by dozens of countries, including Canada, which can serve as an important illustration. In 2016, the International Holocaust Remembrance Alliance (IHRA) adopted a resolution which recognized that antisemitism also includes denying the Jewish People’s collective right to self-determination. In other words, recognizing that all peoples have the right to govern themselves, except Jews in their historical and ancestral homeland, constitutes antisemitism.

The Boycott Divestment Sanctions (BDS) movement, which promotes economic and other pressures on Israel, promoted by Balsam in his column, is a problem for precisely this reason. While Israel is not perfect, and no defender of Israel would claim it is, to fixate on it endlessly and obsessively, while fundamentally ignoring and glossing over the horrendous human rights abuses which happen throughout the region, and, in particular, in Gaza and in the West Bank, is a major obstacle preventing any peace from taking place between Israel and the Palestinians.

Given that Jews are the single largest targeted group for hate crimes in this country according to Statistics Canada, the stakes are very high. And when he misrepresents the legitimate concerns of defenders of Israel against real antisemitism, and ominously claims without proof that there is a “much larger effort” to label critics of Israel as anti-Semites, he not only waters down the real dangers of antisemitism, but, ironically enough, creates a hateful and phantom image of Jews as the boy crying wolf, looking for antisemitism under every rock.

It’s long overdue for advocates of the BDS movement to stop claiming they are the victim of some conspiracy to delegitimize them, and to acknowledge with transparency what their movement truly is: a series of double standards applied to Israel, and no one else, least of all the Palestinians, and an unceasing demonization, which seeks to remove legitimacy from Israel’s very right to exist as a Jewish state.