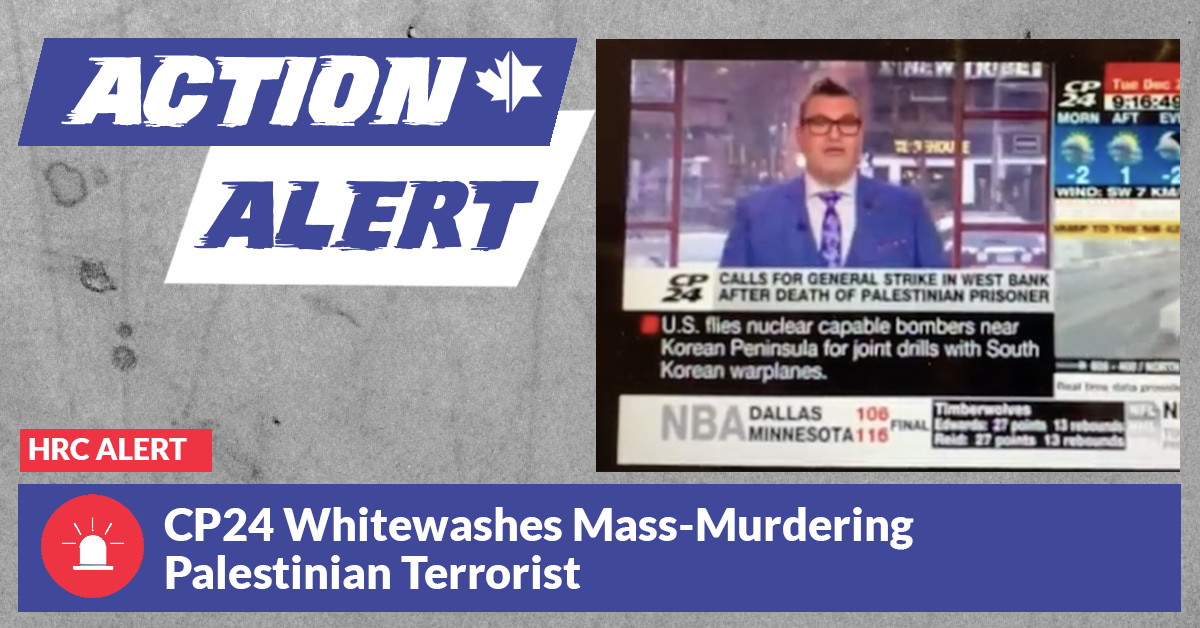 Throughout the day on December 20, CP24 aired a report about how Palestinian prisoner Nasser Abu Hmeid died of lung cancer while in Israeli custody.

Naturally, you might ask who Nasser Abu Hmeid was. According to CP24, Abu Hmeid was 50-years-old and his health had deteriorated. The report said only that Abu Hmeid was serving time in an Israeli jail for his “alleged involvement in the uprising against Israel’s occupation.”

According to the Times of Israel, Abu Hmeid was convicted of murdering seven Israelis: Eliyahu Cohen, Binyamin & Talia Kahane, Gad Rejwan, Yosef Habi, Eli Dahan & Salim Barakat — in a number of terror attacks during the second Intifada that he either personally carried out or directed from afar.

Abu Hmeid was also convicted of 12 counts of attempted murder and a number of other security-related charges and has been serving multiple life sentences.

CP24 failed to broadcast this critical context and instead sympathetically portrayed a mass-murdering terrorist and framed his death as one being due to alleged Israeli neglect. In sharp contrast, an Associated Press report published on CP24’s website reported that: “The (Israeli) Prison Service said Abu Hamid had received ‘close and regular treatment by Prison Service medical staff and outside personnel’ since his diagnosis.”

Fix your odious whitewash & sympathetic portrayal of a terrorist. 1/3 pic.twitter.com/PXFT70PkeZ

In light of CP24’s whitewashing of this mass-murdering Palestinian terrorist, HonestReporting Canada filed a complaint with the Canadian Broadcast Standards Council calling for CP24 to enact immediate corrective attention. To send a complaint yourself directly to CP24, please send emails using the form above and on Twitter, tag @CP24.