Bell, also known as “Spaceman”, was the host of “A View From Space,” which the Star notes was “popular amongst conspiracy theorists.”

On November 11, Bell made anti-Semitic comments which Corus deemed “egregious” and which it apologized for on-air. (You can listen to Bell’s 3+ hour controversial program by clicking on the image immediately below or at the following link.)

Canadian Jewish News reporter Ron Csillag noted that: “On his Nov. 11 broadcast on AM640 in Toronto, Bell, known by his on-air handle “The Spaceman,” described the “Illuminati-controlled mass media,” the threat of a one-world government and an impending world war driven by “satanic forces” trying to take control of global finances.He also spoke about “crypto-Jews” who belong to secret societies, “Judeo-Freemasonry,” powerful Jewish financiers from Europe, the bloodlines of Cain and Judah, as well as some bizarre theories about Osama bin Laden, Adolf Hitler and B’nai Brith.” See the article in full appended below.

I can confirm that Mr. Bell has been terminated from his employment with AM640 and Corus Entertainment… We sincerely apologize to our listeners and anyone else who was offended by Mr. Bell’s egregious comments. Corus Radio recognizes that our broadcast licenses are a privilege. Therefore we are taking strong and immediate steps to ensure such an incident is never repeated.”

On November 18, Corus commendably aired the following on-air apology (listen to it by clicking here or on the image immediately below):

Last week’s AM640 broadcast of “A View From Space” hosted by Gary Bell, included remarks and viewpoints that ran counter to Corus Entertainment polices about discrimination on matters of race, religion, national origin and ethnicity. Mr. Bell’s comments were unacceptable and problematic in that they included references to material that can only be viewed as anti-Semitic. We sincerely apologize to our listeners and anyone else who was offend by Mr. Bell’s comments. Corus Radio recognizes that our broadcast licenses are a privilege. Therefore we are taking strong and immediate steps to ensure such an episode is never repeated. “A View From Space” will not be aired tonight. In its place, we present alternate programming.”

In response, HonestReporting Canada Executive Director Mike Fegelman issued the following statement: “In 2016, Canadian Jews were the most targeted victims of hate crimes according to Statistics Canada. Mr. Bell’s comments were odious and serve only to fan the flames of hatred. HonestReporting Canada commends Corus Radio for taking these necessary steps to ensure that hateful anti-Semitic content and commentary is not broadcast on its programming.” 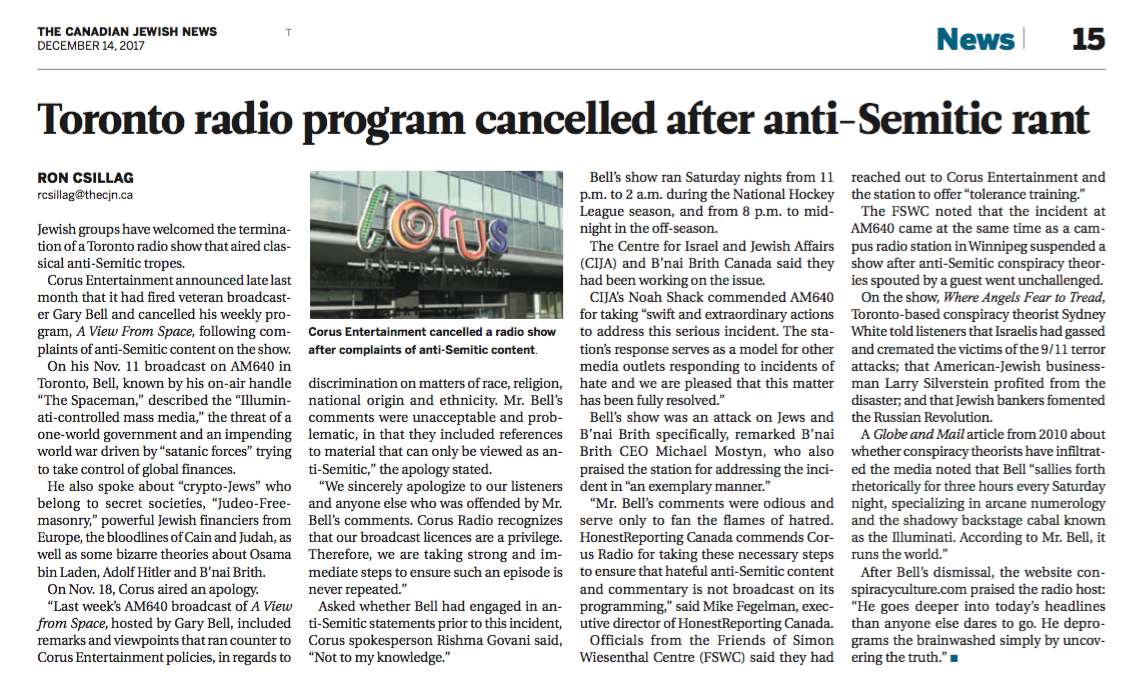