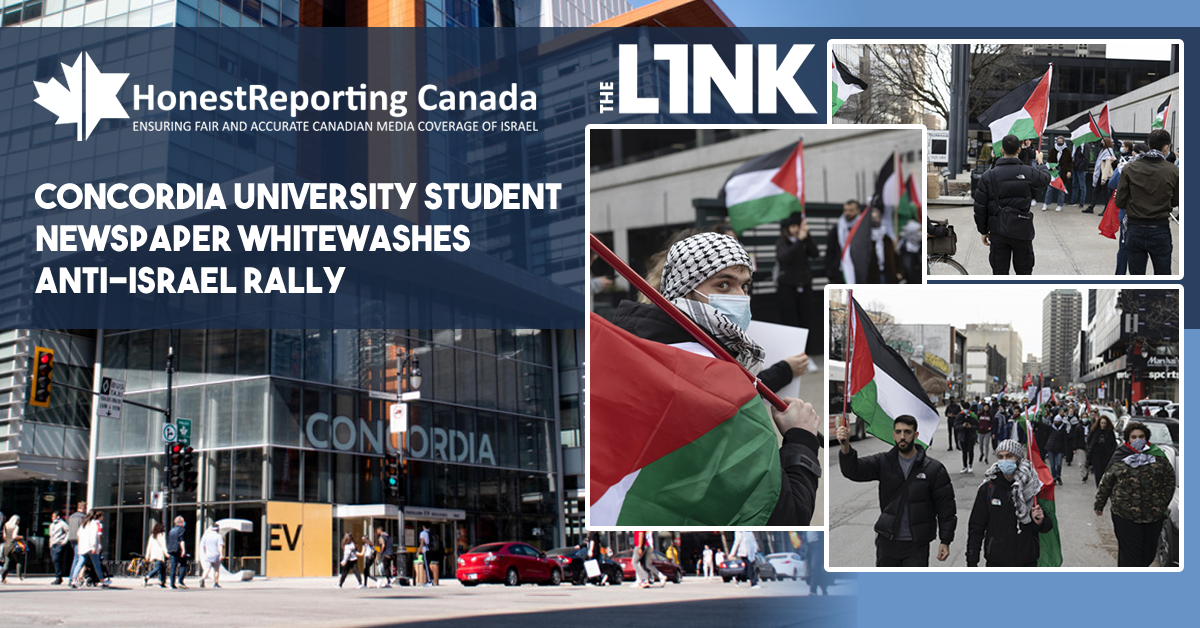 If The Link decides that 100 anti-Israel protesters – out of a metropolitan Montreal population of two million – constitutes newsworthiness, that’s their prerogative. But the article contained a number of instances of misinformation, half-truths, and problematic quotes from demonstration participants, which were repeated uncritically.

“Beginning on Friday, April 15, Israeli police raided the third holiest site in Islam, the al-Aqsa Mosque in Jerusalem,” according to the article, which added that, based on suspicions that Jews would ascend the Temple Mount – upon which the mosque is built – Palestinians began to “preemptively stockpile stones and other methods of defense inside the mosque.”

This is simply absurd and is akin to claiming that a bank robber justifiably carried a gun to pre-emptively defend himself against the police. The Palestinian rioters inside the Al Aqsa Mosque and on the Temple Mount did indeed stockpile rocks and other incendiary weapons, and they used them against Jewish worshippers in the Western Wall Plaza, as well as against a Jerusalem municipal bus, which had its windows shattered.

The Palestinian rioters who lobbed rocks at Jewish worshippers, pedestrians, and Jerusalem police were not defending themselves with any just cause whatsoever. The mosque, which Muslims hold to be the third holiest site in Islam, and which is built atop the Temple Mount, the site of two ancient Jewish Temples, the holiest site in Judaism, was defiled by these Palestinian extremists who are purporting to be defending it.

The Link’s coverage of the demonstration also featured a number of quotes from participants, who spread hateful disinformation about Israel.

Fortier quotes Sarah Abdelshamy, one of the protesters, who tells the newspaper “The attacks in al-Aqsa are just one example of many. The Nakba, which is the day of catastrophe, is every single day. The Zionist forces—the occupation forces—use any force necessary to oppress and dispossess Palestinians every single day.”

The article then explains that “Nakba” or Arabic for ‘catastrophe,’ refers to the “displacement of hundreds of thousands of ethnic Palestinians after the creation of Israel in 1948.”

Abdelshamy’s quote is rife with hateful disinformation. The only aggressive attacks taking place on the Temple Mount are at the hands of Palestinian extremists and rioters, not the Jerusalem police who entered the Al-Asqa Mosque to remove potentially deadly weapons.

The term ‘Nakba’ is a hateful phrase that serves to effectively erase the Jewish People’s three thousand years of history in their ancestral homeland. While it is true that in 1948, thousands of Arabs in Israel left the newly independent Jewish State, they left largely as a result of the Arab-led war of aggression against nascent Israel, and Arab leaders who encouraged Arabs to flee, expecting they would soon return after the Jewish State was destroyed.

It is perfectly legitimate to disagree with any – even all – Israeli policies. Israel, as a democratic state, guarantees this freedom of expression to all its citizens, regardless of religion. But giving space to voices who not only deny Israel’s right to exist as a Jewish State, and which is a de facto denial of the Jewish People’s indisputable historical connection to their own homeland, is little more than an incitement to hatred and certainly has no place being reported in The Link.

Another interviewee, a student and demonstration participant named Nabeel, was even more unapologetic in his assault on Israel’s right to exist.

“[The Canadian government doesn’t] even condemn Israel. See how quickly governments sanctioned Russia when it invaded Ukraine? It’s been 70 years [since the Israeli occupation],” The Link quotes him as saying.

It was 74 years ago that Israel, the nation-state of the Jewish People, gained independence from the United Kingdom after nearly two thousand years under a string of foreign occupiers. At the time, Israel was not in possession of eastern Jerusalem or Judea & Samaria (often called the West Bank), regions with three millennia of Jewish history.

Clearly, for some of the protesters in Montreal, Israel became a villain since the day of its independence, thus suggesting that its very existence is invalid.

This hateful rhetoric, while often repeated, has no basis in history, and serves only to demonize the Jewish People and the world’s only Jewish State. If The Link opts to interview voices, the bare minimum of journalistic responsibility would be to contextualize these quotes as such, not gloss over them as legitimate opinions.

Take Action Now! Send a complaint to the Concordia Link’s Editor-in-Chief, Gabriela Vasquez-Aronson, to voice your concerns about The Link’s whitewashing of a recent anti-Israel rally. Send emails to: editor@thelinknewspaper.ca