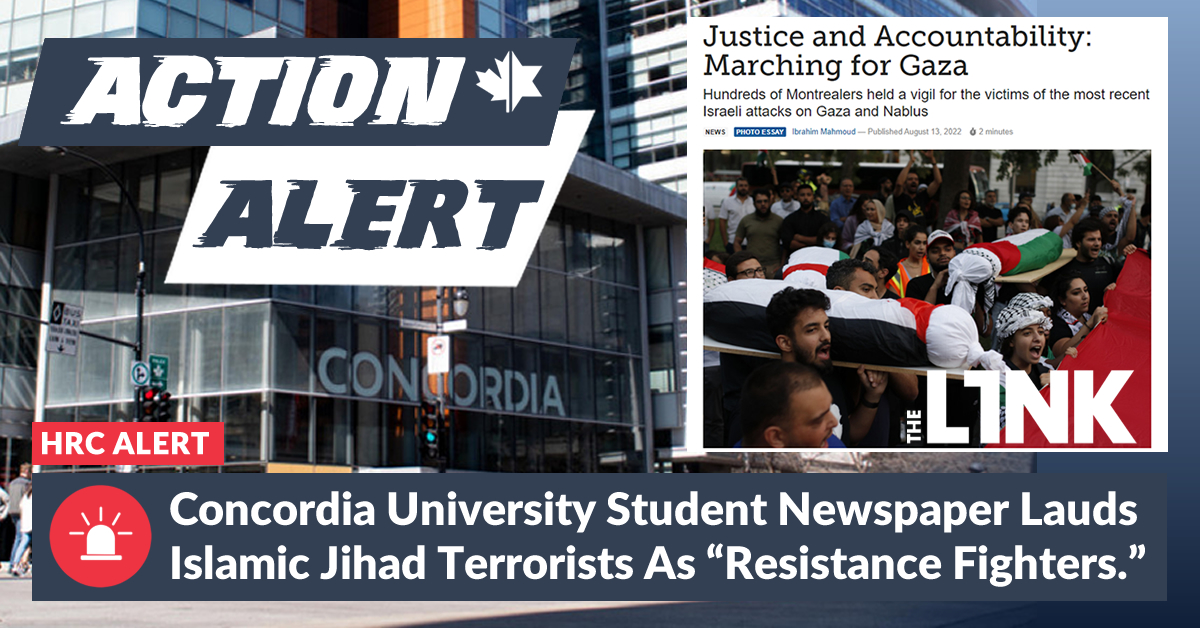 In early August, Palestinian Islamic Jihad (PIJ), an extremist Islamist terrorist group based in the Gaza Strip, engaged in a brief, but intense three-day conflict.

It began when PIJ, also known as Islamic Jihad, mobilized their forces in response to Israel’s arresting one of their leaders and commenced preparations for attacks on an Israeli civilian bus and Israeli gas fields. Shortly thereafter, the group began a fierce campaign of rocket attacks. By the time an Egyptian-mediated ceasefire took effect on the evening of August 7, Islamic Jihad fired roughly one thousand rockets and mortars into Israeli territory, indiscriminately targeting Israeli civilians and population centres.

However, in spite of these incontrovertible facts, it seems that no matter what the circumstances, Israel is always to blame.

In a recent photo essay published on August 13 in The Link, Concordia University’s student newspaper, entitled: “Justice and Accountability: Marching for Gaza,” author Ibrahim Mahmoud covered an anti-Israel rally held in downtown Montreal on August 10, organized by a handful of pro-Palestinian campus groups and organizations in Montreal.

Untold by the Link, this Montreal rally featured calls to “globalize the intifada,” code word for armed violence against Israelis. At the rally, the Palestinian Youth Movement, an organization which praised Palestinian terrorism and mourned Palestinian terrorists, see here and here, projected a video showing a Kaffiyeh-clad Mario, from the Nintendo video game series, jumping on an IDF Goomba.

Mahmoud’s reporting begins with a deeply misleading introduction to the recent fighting when he writes that “Beginning on Aug. 5, a series of attacks from the Israeli military targeted many Palestinian resistance fighters and civilians.” Completely disregarding – in fact, ignoring – the ongoing rocket fire from Islamic Jihad is a stunning omission, but that’s only where the problems with the article begin.

By referring to dead Palestinians in Gaza as “resistance fighters,” Mahmoud is whitewashing a brutal and extremist terrorist group with the blood of hundreds of Israelis on its hands. As well, his allegation that Israel “targeted many Palestinian… civilians” is an egregious falsehood as he alleges that Israel intentionally targeted non-combatants, and implicitly, that the IDF committed war crimes.

Furthermore, Mahmoud writes that “the (Israeli) attacks left 49 dead and more injured, many of whom were children as young as four years old.”

While it is true that a number of young children died in the conflict, evidence suggests that 14 Palestinian civilians, children included, were killed not by Israel, but by errant rockets fired by Islamic Jihad, but which accidentally fell prematurely, and landed back in the Gaza Strip. 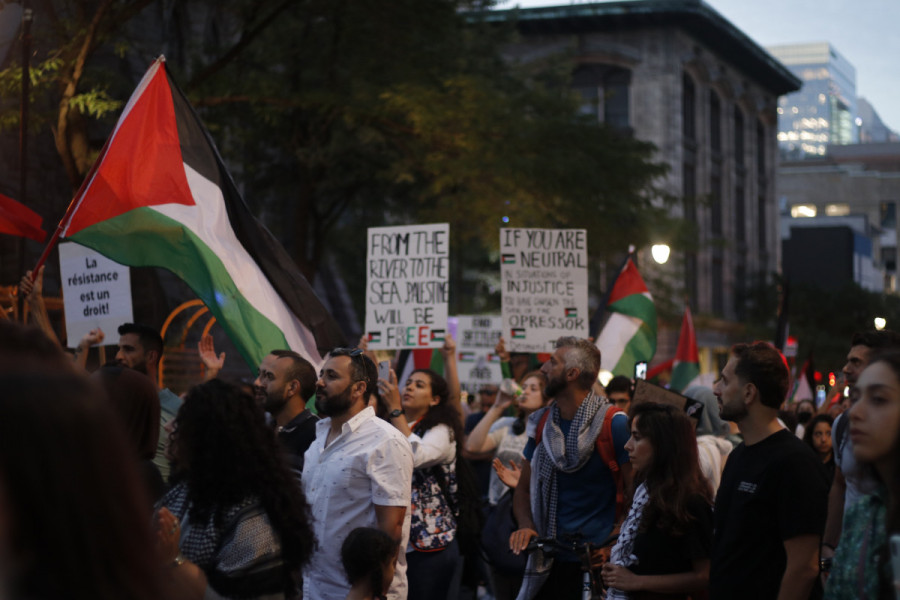 The problems with Mahmoud’s reporting is not limited to his own selective omission and misleading statements, but also with the kid gloves he provides to his interview subjects. In fact, Mahmoud’s reporting is little more than an uncritical stenography of organizers’ claims against Israel. Just look at the photo essay which shows a protestor holding a sign saying “From the river to the sea, Palestine will be free,” an unambiguous call for Israel’s destruction.

One organizer, identified as Reem by The Link, tells the newspaper that “We’re here to show a stand for Gaza, to show that we fully back their resistance, the Palestinian people their struggle for national liberation, freedom and the right of self-determination amidst zionist (sic) occupation from the American and Canadian governments.”

What The Link failed to mention about Reem’s comments is the fact that: a) resistance is a euphemism used to justify Palestinian terrorism and b) Gaza remains entirely unoccupied by Israel. In 2005, Israel forcibly removed all its citizens from the coastal enclave, some of whom had lived there for generations, in a unilateral disengagement meant to help pave the way for peace with the Palestinians.

In response, Palestinian terrorist groups like Hamas wasted no time in turning Gaza into a hotbed of terrorist activity, turning greenhouses donated by Western donors – with the express intent of cultivating a Palestinian agriculture – into tunnels meant for smuggling weapons and fighters into Israel, and launching thousands of rockets into Israel. A Hamas attack-tunnel was neutralized on August 15.

Despite 17 years of intermittent rocket fire and terrorist attacks committed by groups like Islamic Jihad and Hamas targeting Israel, the Jewish State has never permanently re-controlled the Gazan enclave, leaving the area to the Palestinians to self-govern.

By supporting the so-called “resistance” of Islamic Jihad, protest organizer Reem evidently seems to be endorsing the murderous attacks launched by this extremist Islamist group, whose past activities also include blowing up buses and restaurants inside Israeli cities, murdering and injuring countless innocent civilians.

Another organizer, who was granted anonymity by The Link, tells the newspaper that “Palestinians all over the occupied territory are grieving the loss of their courageous resistance fighters and children.” Like Mahmoud, to describe the active and armed members of a bona fide terrorist group – as listed by a number of countries, including Canada – as “resistance fighters” is an assault on objective facts, and an insult to the Israelis who were murdered and maimed as a result of Islamic Jihad’s years of terrorist attacks against the Jewish State.

While this recent conflagration of violence fortunately did not see a single Israeli killed, despite a thousand rockets fired by Islamic Jihad – largely thanks to Israel’s state-of-the-art Iron Dome, which knocks incoming rockets out of the sky – the same cannot be said for Palestinians living inside Gaza, who remain hostages to terrorist groups like Islamic Jihad and Hamas.

But these innocent civilians will tragically not see peaceful days as long as their territory remains ground zero for outgoing attacks on Israel, and by defending these murderous groups and calling them “resistance fighters,” Mahmoud and the rally organizers are causing further damage to any Palestinian hopes of a peaceful future.

And in case you think this is an isolated incident, please see our other alerts from 2022 detailing The Concordia Link’s anti-Israel bias: