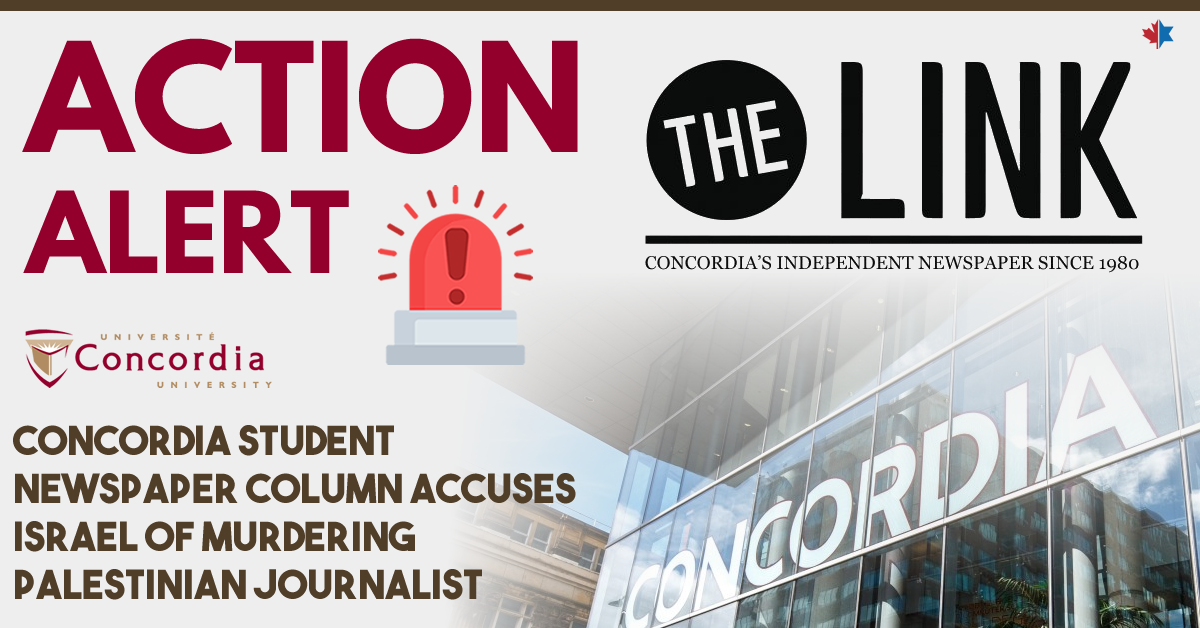 On May 11, Shireen Abu Akleh, a Palestinian journalist with the Al Jazeera news service, was shot in the head as she covered clashes between Israeli troops and Palestinian terrorists in the West Bank city of Jenin.

While the circumstances of her death remain unclear, including whose bullet killed Abu Akleh, this has not stopped some commentators from groundlessly concocting an entire theory without any evidence.

In a May 15 opinion column in The Link, Concordia University’s student newspaper, “A vigil for Shireen Abu Akleh,” author Anthony Issa covers a recent pro-Palestinian rally in Montreal, which was ostensibly in memory of Abu Akleh. Instead, however, his column spews a litany of anti-Israel disinformation, unfounded allegations, and pure factual inaccuracies in covering the death of Abu Akleh.

Issa not only alleges – without any proof whatsoever –  that Abu Akleh was “shot in the head by the Israeli Defense Forces,” but that she was in fact “murdered by an Israeli sniper.”

Abu Akleh was killed, but that is all that is known. Her body was whisked away by the Palestinian Authority, and despite requests by the Israeli government to conduct a transparent and collaborative investigation, the Palestinian government refused.

Abu Akleh may have been shot inadvertently by a Palestinian or Israeli bullet, but only a full investigation would have uncovered the truth. Rather, this highly suspicious coverup move on the part of the Palestinian Authority means that the truth about Abu Akleh’s death will be hidden from public view. As such, reasonable observers could conclude that the Palestinian regime is indeed hiding an uncomfortable truth about her death.

Issa’s baseless allegation that Israel not only is the culprit behind Abu Akleh’s death, but that an Israeli sniper intentionally “murdered” her is more than simply lazy or sloppy writing. In our view, it can help to give oxygen to dangerous anti-Israel and antisemitic blood libels, where Israel is accused of murdering innocent Palestinians for no reason.

Later, he refers to the “northern Palestinian city of Safed.” The city of Safed is, of course, located in Israel proper, as it has been for more than seven decades since the Jewish State gained independence from the United Kingdom. Whether one disagrees with the merits of the Jewish People gaining independence and self-determination in their ancestral homeland or not, pretending that Safed is not located in Israel, but in the non-existent nation-state of Palestine is little more than fantasy writing, and not anything resembling fact-based opinion writing.

Issa also takes issue with what he characterizes as the mainstream media’s “whitewashing of Abu Akleh’s murder,” where he once again accuses Israel of killing Abu Akleh, and purposefully so, without admitting that violent Palestinian terrorists were in armed confrontations with Israeli troops – including gunfire and lobbing explosive devices – and that the Palestinian Authority has refused to allow for an open investigation into the death.

Without mentioning these critical facts, Issa is presenting an extraordinarily misleading account of Abu Akleh’s death.

In his opinion article, Issa quotes a number of pro-Palestinian attendees at the rally, including Sarah Abdelshamy, whose disinformation-laden statements have been published a number of times before in Montreal-area student newspapers.

In April, Abdelshamy was quoted in The Link and alleged that Israel aimed “to oppress and dispossess Palestinians every single day.”

More recently, Abdelshamy was interviewed in The McGill Daily newspaper, where she brazenly dismissed the existence and concerns of McGill University’s Jewish student population when she claimed that only university donors were concerned about an anti-Israel motion being proposed to the student government on campus.

The death of any civilian is a terrible tragedy, and no less, when it’s a journalist who dies in the midst of doing their job. Journalists are tasked with reporting facts and sharing them with their audience, but Issa’s propagandistic column represents the polar opposite of the values reflected by journalists, including respect for facts and transparency.

Issa’s column not only fails to report on key, critical facts related to Abu Akleh’s death, but also repeats unfounded allegations against Israel and reads more like a press release from an anti-Israel group than it does from a student newspaper at Concordia University.

Students at Concordia University deserve better than Issa’s column, and if Issa wanted to honour Abu Akleh’s life work, he ought to start by sticking to the facts.

Take Action Now! Send a complaint to the Concordia Link’s Editor-in-Chief, Gabriela Vasquez-Aronson, to voice your concerns about The Link’s publishing a column baselessly accusing Israel of murdering a Palestinian journalist. Send emails to: editor@thelinknewspaper.ca.

It is amazing that so many can’t see the preposterous lack of integrity of the Palestinians in pursuing the true investigation into the death of this journalist. There are so many haters of Israel that they buy into whatever comes out of the mouths of any enemy of Israel without any journalistic pursuit of the facts. Where has our media stated that the Palestinians refused a joint investigation and are hiding the bullet. If that happened in the US or Canada where anyone was shot ( maybe not a Jewish person so much) there would be an uproar in the various media.