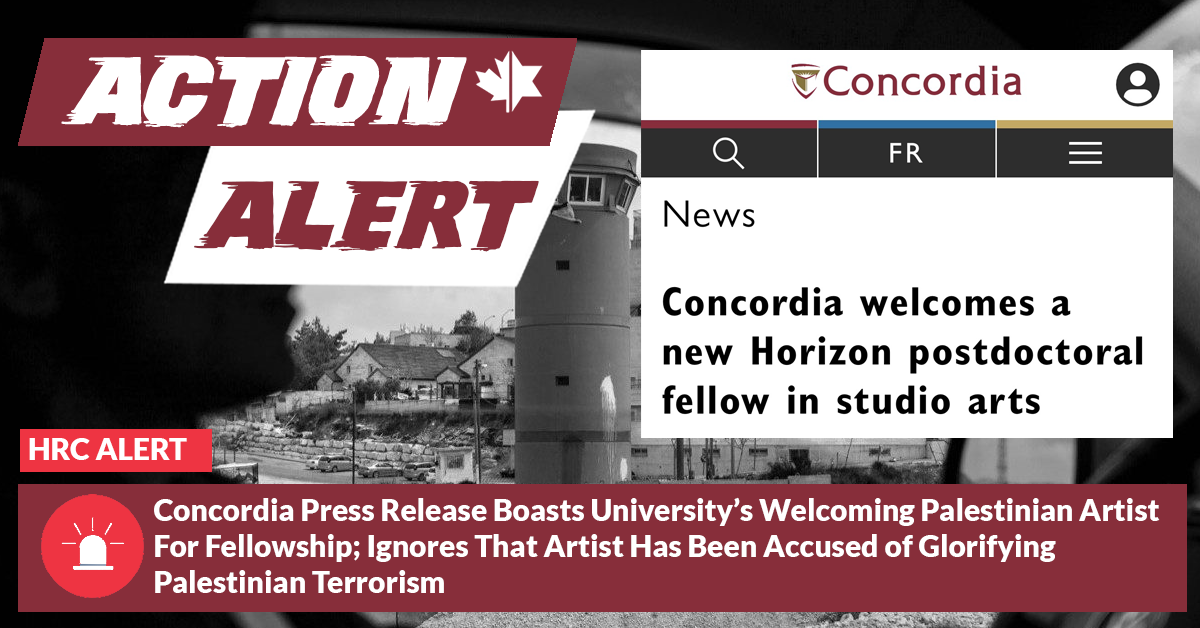 In 2014, a multimedia art exhibit was held at Ottawa’s city call, entitled Target.

The exhibit, created by Rehab Nazzal, a Palestinian-Canadian photographer, became a source of controversy after the exhibit was accused of glorifying Palestinian terrorism.

Target featured photographic portraits of what it described as “assassinated Palestinian figures… lost artists, writers and leaders,” but according to a Macleans Magazine article at the time, also featured several profiles of “members of armed Palestinian groups implicated in deadly atrocities against civilians.”

One of the individuals whose face was profiled in the exhibit was Dalal Mughrabi, who at the age of only 19-years-old, participated in the infamous 1978 Coastal Road massacre in Israel, where a group of Palestinian terrorists hijacked a bus in central Israel before murdering 38 passengers, including 10 children.

Mughrabi was later killed during a shootout with Israeli solders.

As a result of the ensuing controversy, the City of Ottawa made a point to distance itself from the exhibit, placing signs outside the event space reiterating that its contents did not represent the municipality’s views.

The artist who organized the 2014 exhibit, Rehab Nazzal, is back in the news again.

As shared in a recent press release from Concordia University, Nazzal will be serving as the Milieux Institute for Arts, Culture and Technology’s Horizon postdoctoral fellow from 2022 to 2024.

Concordia University’s press release, which was also republished on educationnewscanada.com, gave background on Nazzal’s artistic focus, and described her as a witness of alleged Israeli crimes.

“Returning home in 2005 after a 25-year exile imposed by Israeli occupation authorities was an important moment in her career. Witnessing the destruction of her homeland and people pushed her to shift from painting and drawing to multimedia work with experimental, conceptual and documentary strategies,” according to the press release.

While artists are no doubt inspired by personal experiences, in this case, Concordia University’s press release seems to be describing a very different world altogether, specifically a fictional one. As has been pointed out by professor Eugene Kontorovich, an expert in international law, Israel’s presence in Judea & Samaria (referred to by the news media as the “West Bank”) does not constitute occupation because “a country cannot occupy territory to which it holds sovereign title,” as Israel does.

It is also unclear what “destruction” of the Palestinians the press release is referring to. According to the Palestinian Authority, the population of Arabs living in Israel and Judea & Samaria has grown to nearly seven million people, a five-fold increase since 1948.

The press release also describes Nazzal’s art as exploring the “settler-colonial violence inflicted” on Palestinians, and how she “represents the Palestinian resistance and resilience in the face of a wester-sponsored colonizing power.”

While Nazzal is certainly entitled to her own perspective as an artist, neither she, nor Concordia University, is entitled to their own facts, and the press release’s allegation that Israel is a “colonizing power” is absurd and extremely unbecoming of a university document.

Israel, did not become independent in 1948 from the United Kingdom by accident. It is the ancestral and indigenous homeland of the Jewish People, who have lived in the land of Israel for three thousand years, outlasting a long string of foreign imperial powers such as the Romans, Persians, Greeks, Babylonians, Ottomans, and many others. To wish three millennia of history away and describe Israel as a colonizing power is write off the lived experiences of an indigenous people who have reclaimed their homeland from what was a colonial power, the United Kingdom.

Free expression is a right protected and enshrined by Canada’s Charter of Rights and Freedoms, which means that while Nazzal has the freedom to showcase her work, Concordia University’s press release not only regurgitates false anti-Israel disinformation, it also entirely ignores Nazzal’s past controversy when she was accused of glorifying Palestinian terrorism.