To mark World Press Freedom Day, on May 2, the Globe and Mail published a feature entitled: “These are the journalists who were killed in the line of duty in 2017 and 2018.”

According to the Globe: “In 1993, the UN declared May 3 an annual date to evaluate the state of press freedom in each country – and to honour the journalists who have lost their lives in the line of duty.”

The Globe sourced its reporting to the Committee to Protect Journalists (CPJ) who produced a list of journalists killed in 2017 and 2018.

Importantly, the Associated Press says that Hussein worked for a radio station linked to Popular Front for Liberation of Palestine. PFLP is a considered a terror group by Canada, Israel, the U.S. & EU. 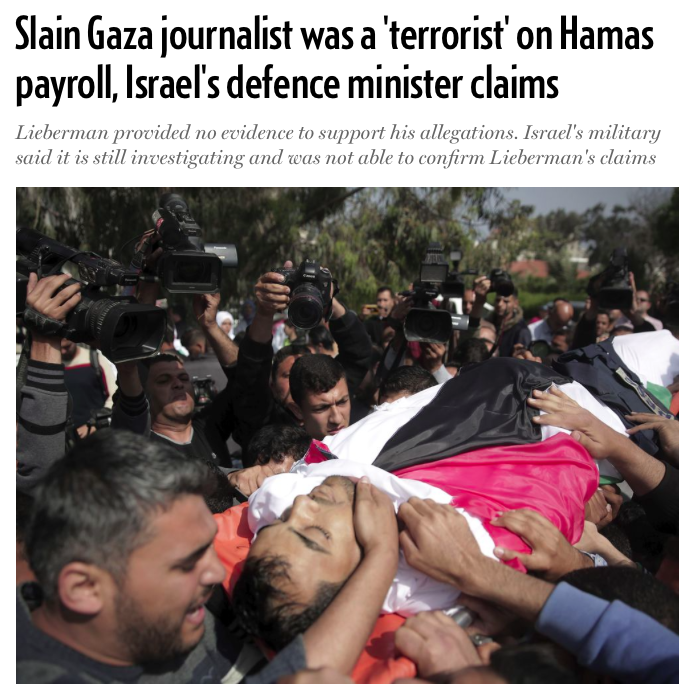 propaganda and incitement, not journalism. Also, according to Israel’s Defense Minister, slain Gaza “journalist” Murtaja was a terrorist on Hamas payroll.

Accordingly, we told the Globe and Mail that it’s a disservice to real journalists who are risking their lives in the pursuit of the truth, to be lumped in with these two individuals who are linked to Palestinian terror groups, or who reportedly are on the payroll of outlawed terror entries.

In response, Globe and Mail Public Editor Sylvia Stead replied that “We are reporting on the list as provided by the Committee to Protect Journalists, which is a reputable and independent group. So we will let it stand as is.”

Of course, we’ve seen before how Palestinian terrorists have disguised themselves as journalists. Take for example, the incident in 2015 when a terrorist donned a media vest and pretended he was a photographer and then attempted to stab an Israeli soldier.

Regrettably, instead of doing its required due diligence, the Globe simply repeated the claims of CPJ and failed to inform its readers that Israel claims these two Palestinian “journalists” are in fact “terrorists”.