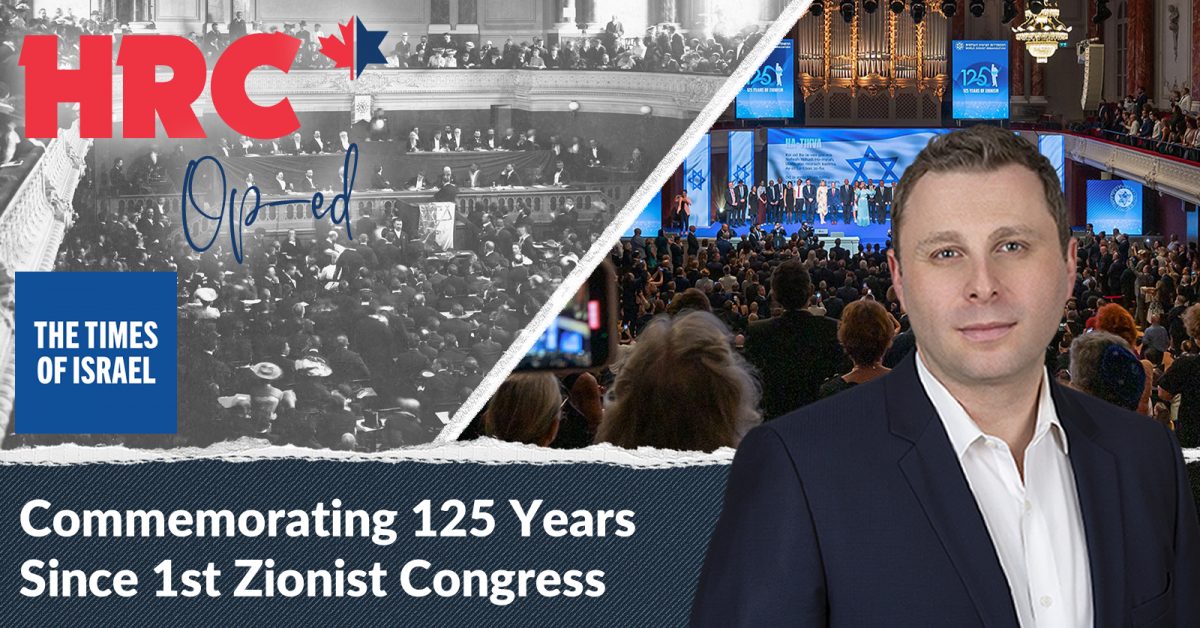 HRC’s Op-Ed was published in The Times of Israel on Monday, September 5, 2022

Over the course of three days in late August, 1897, 208 delegates gathered at Stadtcasino Basel, a concert hall in Basel, Switzerland. Together, they convened the first ever Zionist Congress, and they met as a small symbolic parliament to represent the desire of Jews from across the world who hoped to see a modern-day Jewish state created.

Between August 29 and 31, these delegates created a manifesto, called the Basel Program, which set out the goals of the Zionist movement at the time. Its aims included the strengthening of Jewish communities living in the historic lands of Israel, organizing Jews in the Diaspora, as well as helping to foster an increased sense of Jewish cohesiveness and identity across countries.

Chaired and led by Theodore Herzl, an Austrian journalist who had spearheaded the movement after witnessing an alarming rise in antisemitic activity, the First Zionist Congress was aimed at furthering the goals of the Zionist movement.

The Zionist Organization (ZO), a newly-formed group led by Herzl which hosted the congress, may have been a modern face to a contemporary issue, but the Zionist dream – that of Jewish independence and self-determination in the historic homeland of the Jewish People – was an ancient vision.

Three thousand years earlier, the city of Jerusalem was founded by King David, leader of the Israelites. And David’s son, Solomon, later constructed the First Temple in Jerusalem, which became the focal point of the Jewish People’s religious services and practices.

Over the subsequent centuries, the land of Israel continued to be the central home for Jews, no matter where they lived. In fact, in the sixth century BCE, when the Babylonian Empire under King Nebuchadnezzar II invaded Israel, destroyed the First Temple, and exiled the Jewish population from their historic homeland for the first time, it spurred one of the most memorable poems written in Jewish history, “By the rivers of Babylon we sat and wept when we remembered Zion.”

Clearly, the loss of the land of Israel was more than just a military or strategic defeat for the Jews; it deprived them of a central part of their historic identity.

Later, when the Babylonian Empire was defeated by the Persians, King Cyrus allowed the Jews to return to their land and rebuild their temple, which they did. But this renaissance proved to be fairly short-lived, and when successive foreign powers including Greeks and Romans invaded Israel, eventually Jewish self-determination came to an end, culminating in the Roman destruction of the Second Temple in the first century of the common era.

To add insult to injury, the Romans renamed Judea – from which the word Jew originates – into Palestine, referring to the Philistines, an ancient seafaring people from the Greek Islands. The Romans also renamed the city of Jerusalem into Aelia Capitolina.

The Romans’ goal was clear – to not only destroy the Jewish People’s physical foundation in their land, but to eliminate their history, too. As Princeton University Near Eastern Studies historian Zachary Foster wrote in 2017, “Most scholars believe the Roman Emperor Hadrian changed the provincial administrative name of Judaea to Palestine to erase the Jewish presence in the land.”

Today, the Jewish People’s connection to their land remains under physical attack from a variety of parties, including Hezbollah, the Iranian-based Shiite terrorist group based in southern Lebanon, to Hamas and Palestinian Islamic Jihad (PIJ), the Gaza-based Palestinian Sunni terrorist outfits. But beyond the physical threats to Israel’s safety today are the attempts to rewrite history to erase three thousand years of Jewish presence, exemplified by the BDS (Boycott Divestment Sanctions) movement and others, who seek to reframe Israel as little more than a modern-day colonialist enterprise. Tragically, this subtle attempt by anti-Israel activists to rewrite history are often missed by journalists and news media outlets, who sometimes take for granted the misinformation that Israel is an illegal occupier.

And while both of these assaults are dangerous, the world is very different now than it was 125 years ago.

When delegates at the First Zionist Congress convened, the challenges facing Jews included rampant and often state-endorsed antisemitism, as well as widespread assimilation among Jewish communities throughout the world. And while these issues continue to exist more than a century later, the Jewish People – for the first time in nearly two millennia – can enjoy the safety, security and self-determination of their own state, in their own land.

The Times of Israel