In a letter published in the Kingston Whig-Standard on November 7, HRC asked what exactly columnist Louis Delvoie was suggesting when he claimed on November 3 that U.S. President Donald Trump is “in the pocket of Israel’s right-wing Prime Minister Benjamin Netanyahu...” and is “subservient” to Israel’s leader? 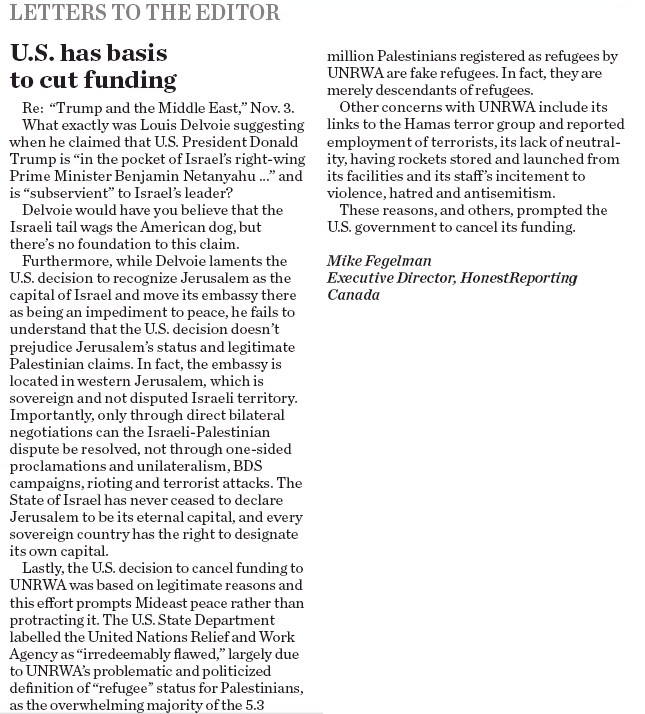 Our full unabridged letter is as follows:

What exactly was Louis Delvoie suggesting when he claimed that U.S. President Donald Trump is “in the pocket of Israel’s right-wing Prime Minister Benjamin Netanyahu…” and is “subservient” to Israel’s leader? 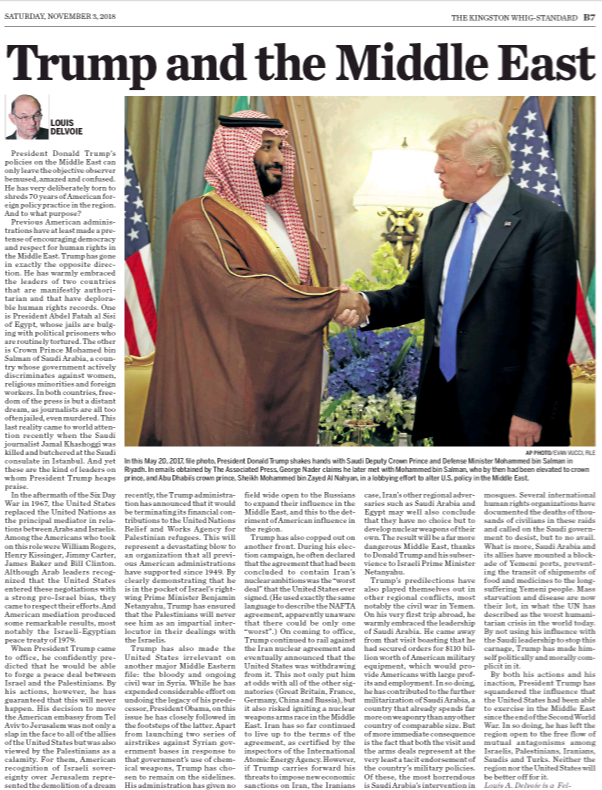 Mr. Delvoie’s statement sounds eerily familiar to the myth of the “new Protocols of the Elders of Zion,” the antisemitic tsarist forgery that proclaimed an international Jewish conspiracy bent on world domination and which accuses Jews of controlling government, the economy, media and public institutions.

Delvoie’s claims were featured in his Kingston Whig-Standard column entitled: “Trump and the Middle East” which was published on November 3.

Delvoie, a Fellow in the Centre for International and Defence Policy at Queen’s University, would have you believe that the Israeli tail wags the American dog, but there’s no foundation to this claim.

Furthermore, while Delvoie laments the U.S. decision to recognize Jerusalem as the capital of Israel and move its embassy there as being an impediment to peace, he fails to understand that the U.S. decision doesn’t prejudice Jerusalem’s status and legitimate Palestinian claims. In fact, the embassy is located in western Jerusalem which is sovereign and not disputed Israeli territory. Importantly, only through direct bilateral negotiations can the Israeli-Palestinian dispute be resolved, not through one-sided proclamations & unilateralism, BDS campaigns, rioting and terrorist attacks. The State of Israel has never ceased to declare Jerusalem to be its eternal capital and every sovereign country has the right to designate its own capital.

Lastly, the U.S. decision to cancel funding to UNRWA was based on legitimate reasons and this effort prompts Mideast peace rather than protracting it. The U.S. State Department labelled the United Nations Relief and Work Agency as “irredeemably flawed” largely due to UNRWA’s problematic and politicized definition of “refugee” status for Palestinians, as the overwhelming majority (over 99 per cent) of the 5.3 million Palestinians registered as refugees by UNRWA, are fake refugees. In fact, they are merely descendants of refugees.

Other concerns with UNRWA include its links to the Hamas terror group and reported employment of terrorists, its lack of neutrality, having rockets stored and launched from its facilities and its staff’s incitement to violence, hatred and antisemitism.

These reasons, and others, prompted the U.S. government to cancel its funding.