The Canadian Jewish News covered HonestReporting Canada’s Insider Briefing with Yossi Klein-Halevi on January 17, where our esteemed speaker warned to an audience of 1,000 viewers that Iran should be the top priority for Joe Biden.

The full article by Ron Csillag is reproduced below: 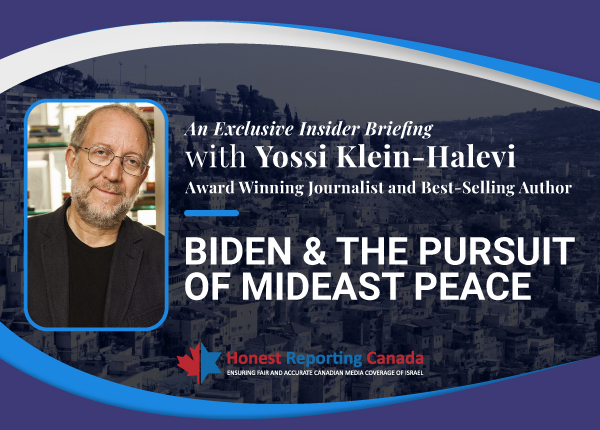 Iran – not the Palestinians, not Jewish settlements – should be the main concern of the new U.S. administration’s Middle East policy.

U.S. president-elect Joe Biden is already “secretly” negotiating with Iran, according to Israeli journalist and author Yossi Klein Halevi. “This worries me more than anything else,” he told a Jan. 17 “Insider Briefing” webinar hosted by Honest Reporting Canada.

“I think we need to stop focusing on the Palestinian issue and really be focusing on Iran. This is the most important issue on the agenda,” Halevi said. “For this generation, Iran is the great existential threat to the Jewish people.”

Israel’s other problems are “manageable.”

Halevi, author of the bestselling book Letters to My Palestinian Neighbor and a senior fellow at the Shalom Hartman Institute in Jerusalem, said he shares Israeli Prime Minister Benjamin Netanyahu’s “vehement opposition” to the 2015 Iran nuclear deal. “I think it was a betrayal of Israel.”

Halevi did fault Netanyahu for engaging in a “total embrace” of the U.S. Republican party and of a “toxic” president in Donald Trump. The prime minister should have cultivated better relations with Democrats, even though he viewed them as betrayers of Israel, but whose return to power could have been predicted, Halevi noted.

For the Israeli leader to so closely tie Israel’s reputation and interests to Trump “is something we could pay a very high price for. If you so fundamentally alienate Democrats, let’s not be surprised when they come back to office, there’s going to be a price to pay.”

That price is Iran. While Trump walked away from the nuclear deal – pleasing Israel – Biden will seek to salvage it, Halevi said.

He said former president Barack Obama, on whose watch the agreement was signed, had “a messianic sense” that he would remake the Middle East. But on Iran, he “fundamentally miscalculated.”

In Biden, Halevi senses “a greater sobriety…he does not have Obama’s messianic pretentions. I think he’s much more modest. He understands what Obama did not: that Iran is not going to become the regional good guy in the Muslim world. I think he does see Iran as a threat.”

But like Obama, Biden “mistakenly believes Iran can be enticed into good behavior.” He “has not fully internalized just how disastrous the Iran deal is.”

The “scandal” of the agreement lies in its so-called sunset clause, which “all but guarantees” that there will be nothing stopping Iran from making nuclear weapons, Halevi said.

The deal “is so flawed in its essence that there’s no hope of tinkering with it. There is no better version. We need a new deal.”

If the U.S. maintains strong sanctions and presents a credible threat of force, “I believe [Iran] will back down.”

Halevi said he also hopes the Biden administration will tell the Iranians that the old deal is off the table and insist they dismantle their weapons program and end uranium enrichment, which began anew after Trump abandoned the agreement.

“Is Biden going to do that? That’s what’s keeping me up.”

Even so, “Biden is a genuine friend [to Israel]. Biden loves Israel.”

Halevi’s comments came as reports emerged from the Biden transition team on Jan. 17 that the incoming administration has already begun unofficial talks with Iran and has kept Israel informed of those discussions.

Halevi pointed out that through the Abraham Accords that normalized relations with several Arab states, Israel finds itself in the “extraordinary” position of being the “regional protector” against Iran.