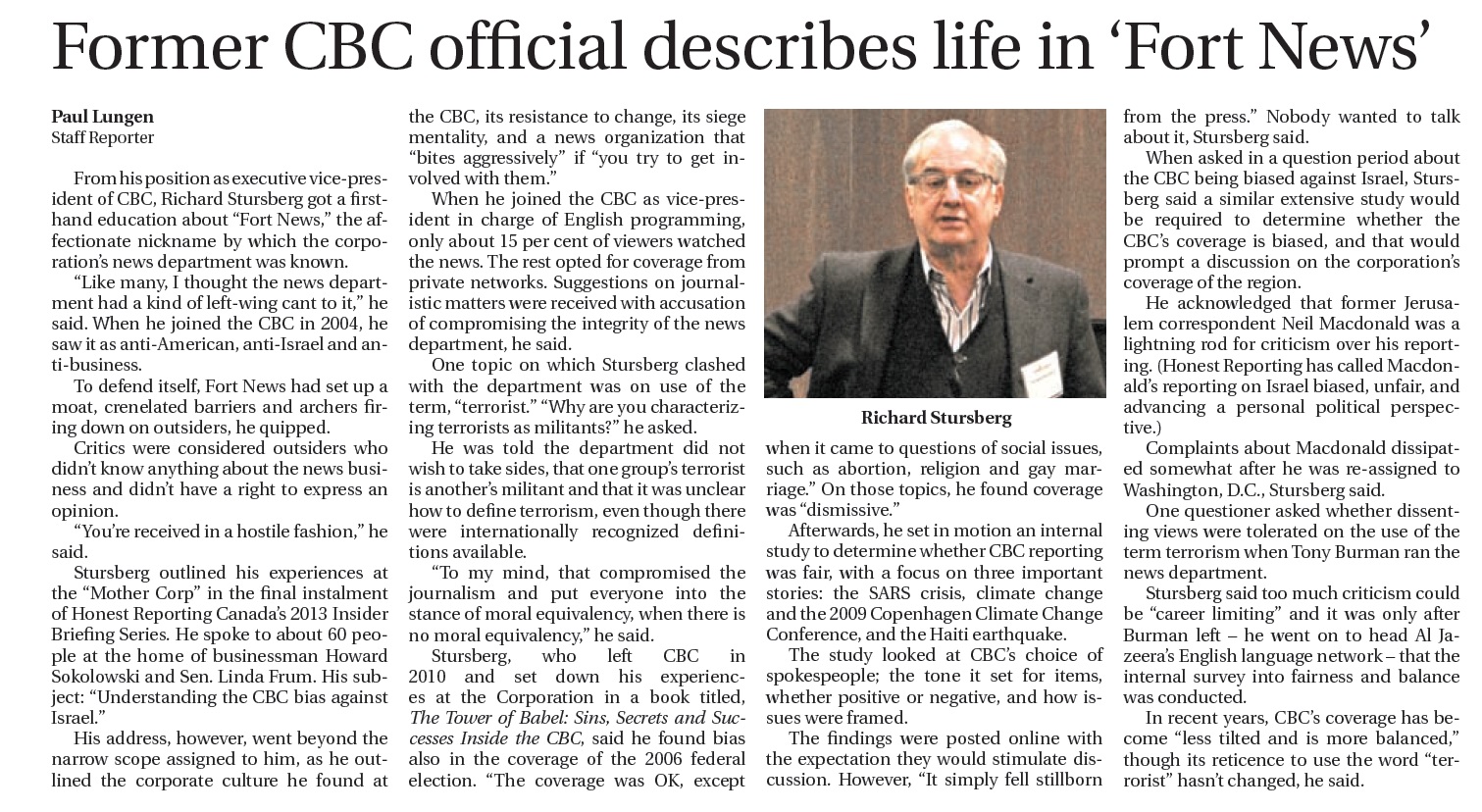 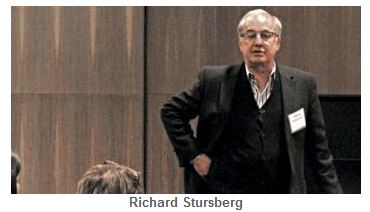 From his position as executive vice-president of CBC, Richard Stursberg got a first-hand education about “Fort News,” the affectionate nickname by which the corporation’s news department was known.

“Like many, I thought the news department had a kind of left-wing cant to it,” he said. When he joined the CBC in 2004, he saw it as anti-American, anti-Israel and anti-business.

To defend itself, Fort News had set up a moat, crenelated barriers and archers firing down on outsiders, he quipped.

Critics were considered outsiders who didn’t know anything about the news business and didn’t have a right to express an opinion.

“You’re received in a hostile fashion,” he said.

Stursberg outlined his experiences at the “Mother Corp” in the final instalment of Honest Reporting Canada’s 2013 Insider Briefing Series. He spoke to about 60 people at the home of businessman Howard Sokolowski and Sen. Linda Frum. His subject: “Understanding the CBC bias against Israel.”

His address, however, went beyond the narrow scope assigned to him, as he outlined the corporate culture he found at the CBC, its resistance to change, its siege mentality, and a news organization that “bites aggressively” if “you try to get involved with them.”

When he joined the CBC as vice-president in charge of English programming, only about 15 per cent of viewers watched the news. The rest opted for coverage from private networks. Suggestions on journalistic matters were received with accusation of compromising the integrity of the news department, he said.

One topic on which Stursberg clashed with the department was on use of the term, “terrorist.” “Why are you characterizing terrorists as militants?” he asked.

He was told the department did not wish to take sides, that one group’s terrorist is another’s militant and that it was unclear how to define terrorism, even though there were internationally recognized definitions available.

Stursberg, who left CBC in 2010 and set down his experiences at the Corporation in a book titled,

The Tower of Babel: Sins, Secrets and Successes Inside the CBC, said he found bias also in the coverage of the 2006 federal election. “The coverage was OK, except when it came to questions of social issues, such as abortion, religion and gay marriage.” On those topics, he found coverage was “dismissive.”

Afterwards, he set in motion an internal study to determine whether CBC reporting was fair, with a focus on three important stories: the SARS crisis, climate change and the 2009 Copenhagen Climate Change Conference, and the Haiti earthquake.

The study looked at CBC’s choice of spokespeople; the tone it set for items, whether positive or negative, and how issues were framed.

The findings were posted online with the expectation they would stimulate discussion. However, “It simply fell stillborn from the press.” Nobody wanted to talk about it, Stursberg said.

When asked in a question period about the CBC being biased against Israel, Stursberg said a similar extensive study would be required to determine whether the CBC’s coverage is biased, and that would prompt a discussion on the corporation’s coverage of the region.

He acknowledged that former Jerusalem correspondent Neil Macdonald was a lightning rod for criticism over his reporting. (Honest Reporting has called Macdonald’s reporting on Israel biased, unfair, and advancing a personal political perspective.)

Complaints about Macdonald dissipated somewhat after he was re-assigned to Washington, D.C., Stursberg said.

One questioner asked whether dissenting views were tolerated on the use of the term terrorism when Tony Burman ran the news department.

Stursberg said too much criticism could be “career limiting” and it was only after Burman left – he went on to head Al Jazeera’s English language network – that the internal survey into fairness and balance was conducted.

In recent years, CBC’s coverage has become “less tilted and is more balanced,” though its reticence to use the word “terrorist” hasn’t changed, he said.