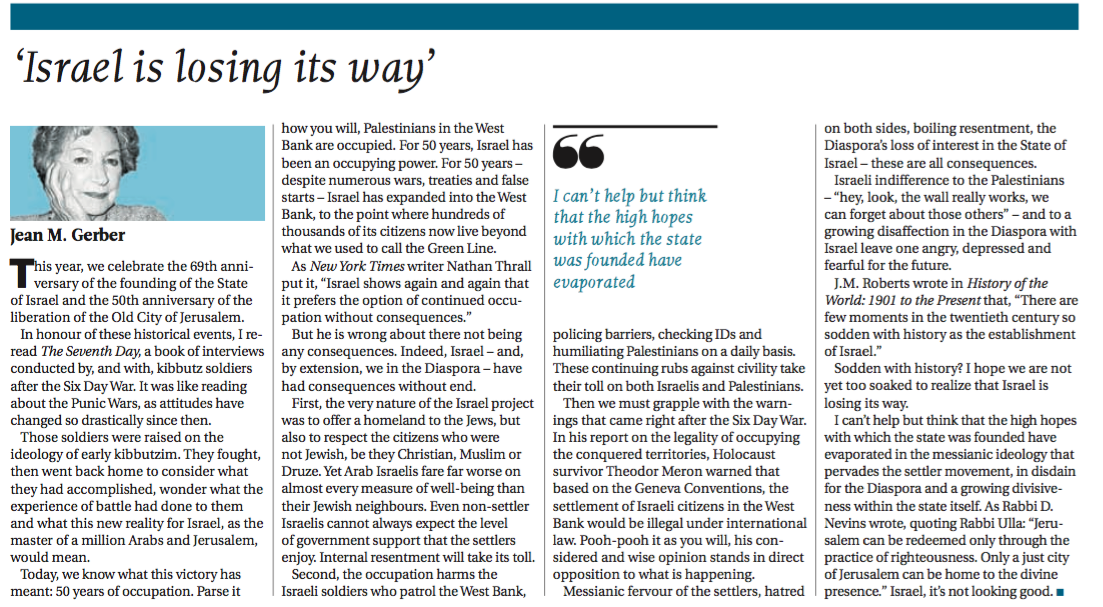 In her latest commentary published on August 17 in the Canadian Jewish News entitled: “Israel is losing its way,” columnist Jean M. Gerber admonishes Israel for “50 years of occupation” of the “West Bank”. See the commentary in full appended below or read it only on the CJN’s website. The piece was headlined: “Palestinians are occupied, and we all suffer”.

Gerber’s claiming that the “West Bank” is “occupied” Palestinian land, fundamentally erases from the historical record a continuous 3,000+ year Jewish presence in what was called until a few decades ago “Judea and Samaria.” Jews have never ceded their rights and importantly, you can’t occupy your own home.

Having expunged the legal, religious, and historical connection of Jews to Judea, one would then have to purge the legally binding League of Nations Mandate, unanimously approved by 51 countries, which called for the recognition and reconstitution of the Jewish National home. Having accomplished that, one would then have to ignore Israel’s legal claim to the area which is by virtue of the Balfour Declaration, the San Remo Declaration of 1920, and Article 80 of the UN Charter which implicitly recognizes the “Mandate for Palestine” of the League of Nations. Finally, one would have to conveniently forget that the so-called “occupation” of the “West Bank” was only brought after combined Arab armies in 1967 sought to effectively wipe Israel from the map.

Israel took over the “West Bank” during the Six Day War which was aggressively launched against the Jewish state by Egypt, Syria and Jordan. The true illegal “occupiers” of the “West Bank” were the Jordanians who controlled the land until 1967 following their previous attempt to destroy the nascent state of Israel in 1948. Jordan had no legal claim to the land, nor did a state of “Palestine” ever exist. The Ottoman Empire and the British Mandate were the past administrators of the land making the area fundamentally “disputed” and not “occupied.”

Only by discarding history, binding legal documents, the UN Charter and the provisions of the international laws of war which makes the aggressor accountable for his aggression, can one conclude that the “West Bank” is “occupied” Palestinian land.

UN Security Council Resolution 242 authorizes Israel, having conquered the land in a defensive war, to remain in possession of the territories. According to Resolution 242, when “a just and lasting peace in the Middle East” is achieved, Israel can withdraw to ‘secure and recognized boundaries’”.

Because no legal determination has ever been made as to their sovereignty, neither the territories nor the settlements are in breach of international law. Thus, the often– but wrongly– used term “occupied Palestinian territories” has no basis whatsoever in law or fact.

Gerber contends the “occupation” harms Israeli soldiers who are “humiliating Palestinians on a daily basis.” In reality, it’s Palestinian terrorism in the form of suicide bombings, stabbings, rocket fire, shootings, and car ramming attacks that harm Israelis. Israel’s military presence thwarts and deters relentless Palestinian terror. Would Gerber prefer that Israel commit national suicide by removing these important security measures? (Easy for her to say from her perch here in Canada.)

Gerber rebukes Israel for how, in her own words “Arab-Israelis fare far worse on almost every measure of well-being than their Jewish neighbours,” but she ignores how Israeli-Arabs – by a wide margin – would rather live in Israel than anywhere else, including a future Palestinian state. Arabs living in Israel enjoy more rights and freedoms than any other Arab country in the Middle East.

A just resolution of the Israeli-Arab conflict is impeded by continued intolerance of the Jewish right to self-determination in the land of Israel. Because this is unpalatable to a western liberal mindset, this intolerance is disguised through inversions. It’s a conflict that’s passed off as territorial, but is existential. It masquerades as a concern for “human rights” but ignores true injustice in the region and worldwide. It heaps selective opprobrium on Israel alone for an impasse in peace talks, but overlooks official Palestinian Authority glorification of terrorism and jihad which makes peace anathema.

Gerber claims Israel is “losing its way” and is “not looking good,” truth is that in its close to seven decades of existence, Israel has built a thriving democracy, with an independent judiciary, one of the world’s strongest militaries and an innovative “start-up nation” economy that is the envy world round. A thriving tourist, culinary and cultural destination, the Jewish state boasts having a multicultural, pluralistic and tolerant society and a vibrant marketplace of ideas and a robust free press.

In reality, Israel has never lost its way and looks great at just 69 years young!