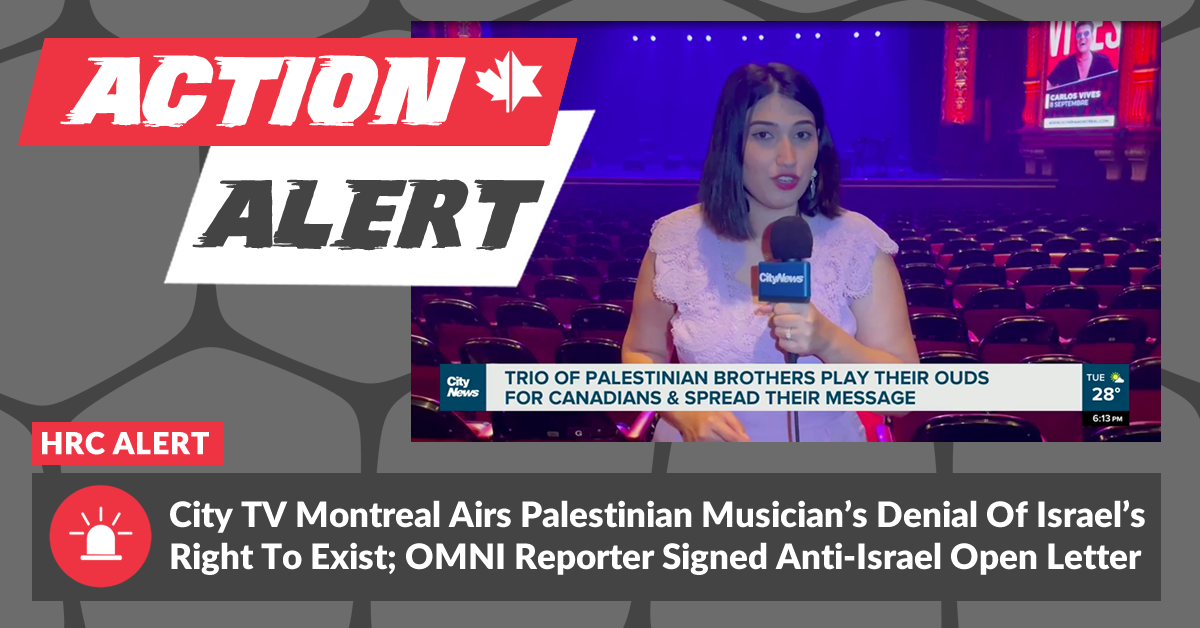 On July 23, City TV Montreal broadcast a segment by OMNI reporter Farah Mustapha about how Palestinian brothers in a band called Le Trio Joubran are touring Canada and were performing in Montreal.

According to Mustapha, “They say they play to honour the struggles and oppression of their people through music.”

The OMNI reporter then quoted one of the brothers, Samir Joubran, saying: “My message is giving love, hope, we are still hoping that we can get the freedom to live in a free country without occupation.”

Though the brothers regard themselves as Palestinians, this report notes that they are from Nazareth, an Israeli city which makes them, drum roll please… Arab-Israelis. The musicians, according to this report, claim they travel the world to tell people about the Palestinian cause. Meanwhile, City TV’s report refers to the non-existent state of “Palestine,” despite the fact that the Palestinians haven’t been granted statehood yet.

OMNI reporter Mustafa quotes brother Wissam Joubran who says: “It is a poem that Mahmoud Darwish, the great poet, wrote in 1992… It is a very symbolic message actually because he is comparing this case [of the Indigenous and white man] to the Palestinian case. We are living this situation since 74 years and until today, and we aim to end this occupation and start the life.”

While many critics who accuse Israel of allegedly “occupying Palestinian land” claim the Six Day War in 1967 as the genesis of the so-called occupation, though Israel strenuously disputes this, Joubran goes a step further. By claiming that Israel’s “occupation” began in the 1948, Joubran is arguing that Israel’s independence in 1948 from the United Kingdom was already an illegal occupation, meaning that Israel has no right to exist at all.

Owned by Rogers Media, City TV and OMNI’s report failed to challenge this egregious accusation and allowed it to go on air, and on its website, without any context and countenance. To make matters worse, an HonestReporting Canada investigation has revealed that in May 2021, OMNI/City TV reporter Farah Mustapha signed an anti-Israel open letter which falsely claimed Israel was conducting “escalating violence against Palestinians,” including carrying out “indiscriminate airstrikes,” and that there is a “deep reluctance (by Canadian journalists) to cover the ongoing nature of the Israeli occupation.”

The anonymously written anti-Israel letter and its corresponding advocacy campaign, ignored how Palestinian terrorists initiated violence and at the time, had fired several thousands of rockets at Israeli civilians. The letter forcefully implied that Israel is committing “grave breach(es) of international law” and “ethnic cleansing.”

Accordingly, reporter Farah Mustapha can only be regarded as a partisan anti-Israel activist who lacks objectivity and political neutrality in her coverage of matters concerning Israel. That she was allowed to produce this report which contained a denial of Israel’s right to exist is alarming and shows a complete lack of journalistic standards at Rogers, OMNI and City TV.

Take Action Now: Contact City TV Montreal to voice your concerns about how it broadcast and published a report containing a denial of Israel’s right to exist and that its reporter, Farah Mustapha, previously signed an anti-Israel open letter and subsequently produced this report which regarded Israel’s birth as an “occupation”. Click here to send a complaint. Send Tweets to @OmniTelevision and @CityNewsMTL.