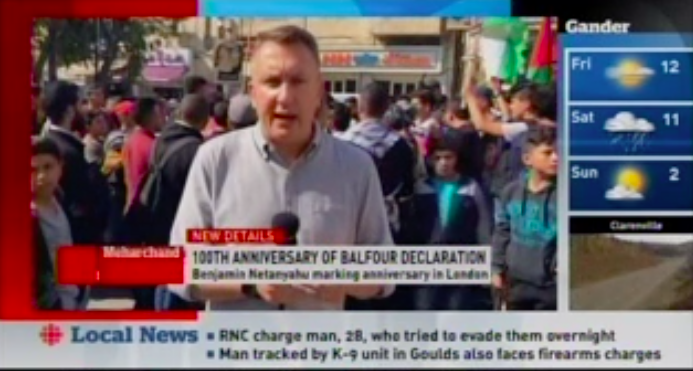 In a CBC TV report broadcast on November 2 marking the 100th anniversary of the Balfour Declaration (the historic document written by Lord Arthur Balfour which expressed Britain’s support for a Jewish national homeland in historic Palestine) CBC Mideast journalist Derek Stoffel’s report implicitly cast doubt on Israel’s right to exist by supposedly referencing Palestinian claims stating that the Balfour Declaration “led to the military occupation of the Palestinian people by the Israelis.”

“Palestinians have gathered in communities across the west bank including here in Ramallah where this small demonstration is under way to protest against the Balfour Declaration. That was the Declaration a hundred years ago by the British government to express the British government’s support of the establishment of a homeland for the Jewish people in historic Palestine. It was also supposed to grant rights to the Palestinians, but the Palestinians demonstrating here today say that has not been the case and it has led to the military occupation of the Palestinian people by the Israelis.”

In echoing a claim that Israel has been militarily occupying Palestinian territories since 1948, the year of Israel’s independence, this CBC report has tacitly denied Israel’s very right to exist. These comments mirror those made by former NDP Deputy Leader Libby Davies which brought calls for her resignation, and those made by the late Helen Thomas, formerly of Hearst News, who resigned following for her remarks.

Furthermore, the Balfour Declaration didn’t “grant rights to Palestinians,” Jews and Arabs at the time were both regarded as Palestinians. The Declaration only affirmed the civil and religious rights of non-Jewish (Arabs, etc.) be not prejudiced. It only afforded political status/rights to Jews. The Declaration specifically said that “nothing shall be done which may prejudice the civil and religious rights of existing non-Jewish communities in Palestine or the rights and political status enjoyed by Jews in any other country.” It was envisioned that non-Jews (including Arabs) would live as a protected minority within the Jewish national home. The non-Jewish Arab population did not secure political sovereignty rights.

As we’ve written widely, most recently in The Telegram, the Balfour Declaration affirmed the Jewish legal, moral and ancestral rights to the land of Israel and to Jewish self-determination.

Reporting from Arafat Square in Ramallah, Stoffel focused his reporting on how hundreds of Palestinians were protesting the Balfour Declaration.

Stoffel’s one-sided report did not quote or show any Israelis or Jews worldwide celebrating this historic milestone, nor did it feature imagery showing Israeli Prime Minister Benjamin Netanyahu in London celebrating the anniversary with British Prime Minister Theresa May.