Though Israel won widespread praise for its leading role and brave humanitarian efforts in the daring rescue of hundreds of individuals associated with Syria’s White Helmets, our public broadcaster, the CBC, produced truly appalling coverage that maligned Israel’s efforts.

Amazingly, though media outlets wide and far prominently acknowledged Israel’s integral role in the dangerous rescue mission, a CBCNews.ca report on July 22 failed to even mention Israel’s efforts at all. A report by senior defence reporter Murray Brewster entitled: “Canada to accept up to 250 Syrian White Helmet volunteers, family after dramatic escape” originally only detailed how “Several hundred people — volunteers and their families — belonging to the rescue organization known as the White Helmets were extracted late Saturday from the southwestern portion of the war-torn country that’s being overrun by forces loyal to leader Bashar al-Assad.”

The story lead by mentioning (emphasis added): “Canada is among three Western nations that will accept hundreds of volunteer emergency workers plucked from Syria under the cover of darkness in a dramatic international rescue, CBC News has learned.” Untold in the entire article was that it was Israel who evacuated 400 White Helmets rescuers and their families from Syria to Jordan overnight at the request of the United States, Canada and European countries, as noted by Al Jazeera for example.

In a complaint sent by HRC to senior CBC Editors at 8:11am on Sunday July 22, we asked why this vital information was not mentioned in Mr. Brewster’s report. After all, Mr. Brewster had mentioned the following other countries who were involved in the operation when saying (emphasis added): “The volunteers were spirited out of Syria in a highly secret international operation that involved the U.K., France, Germany, the Netherlands and Canada, multiple sources told CBC News. Canada was not involved militarily in the evacuation, ​but ​helped lead the effort to bring them out of Syria and ​into Jordan.”

Again, why did this CBCNews.ca report by Mr. Brewster not mention that it was Israel who extracted them? We called on CBC to take immediate corrective action. Subsequent to our complaint, the CBC “updated” its report to acknowledge Israel’s integral role. The report now states in the lead: “Canada is among three Western nations that will take in nearly a hundred volunteer emergency workers and their families that Israeli forces plucked from Syria under the cover of darkness in a dramatic international rescue, CBC News has learned.”

The article continued by mentioning that:

The Israeli military said Sunday it was responsible for rescuing members of the Syrian volunteer organization from the volatile frontier area and evacuated them to a third country — the first such Israeli intervention in Syria’s lengthy civil war. Israeli Prime Minister Benjamin Netanyahu issued a statement on Sunday saying the rescue came about as a result of recent requests by U.S. President Donald Trump, Prime Minister Justin Trudeau ‘and others.”These are people who have saved lives and whose lives were in danger,’ Netanyahu said of the White Helmets. ‘Therefore, I approved their passage through Israel to additional countries as an important humanitarian gesture.'”

As well, the following tweet from the Israel Defense Forces was published by the CBC:

Nevertheless, the question that remains to be answered by the CBC is why wasn’t this important information included in its original reporting? We await the CBC’s official response to our complaint. CBC’s biased reporting about Israel’s rescue efforts of the White Helmets continued on July 23 with a report by Susan Ormiston on CBC The National. In a report abut how the White Helmets became targets, Ms. Ormiston stated the following (emphasis added):

Last week, as the war crept closer to Israel’s border with Syria, Prime Minister Netanyahu was asked to help the White Helmets out. Today he said the lives of the people who saved others are in danger. But his opponents accused him of trying to deflect criticism away from the escalating campaign against Gaza.”

CBC viewers were then shown footage of apparent Israeli air strikes on Gaza on July 18: 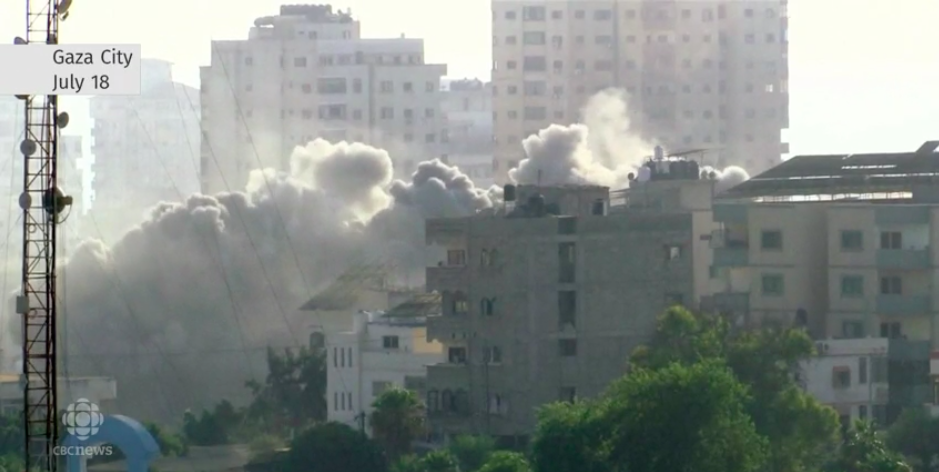 Ms. Ormiston’s stating that Israel undertook this daring and dangerous humanitarian operation as essentially a smokescreen to deflect attention and criticism away from its military efforts in Gaza, is unfounded and was a highly editorialized and inflammatory statement, instead of being neutral and objective. There was no place for this type of statement to be present in a report of this nature, irrespective of how this may have been phrased using indirect attribution (“his opponents accused him…”.

Furthermore, Israel is not carrying out a “campaign against Gaza”, it’s carrying out defensive operations against Hamas terrorists who have launched hundreds of rockets and incendiary devices across the border. We told the CBC in a complaint filed on July 24, that we strongly feel that immediate corrective action must be undertaken by the CBC to remedy this serious situation.

We await the CBC’s official response to our complaint.

It doesn’t end there though. In an interview broadcast on CBC Radio’s The Current on July 24 with guest host Megan Williams, CBC interviewed Bessma Momani, Senior Fellow at the Centre for International Governance Innovation at the University of Waterloo, who outrageously claimed that Israel was attempting to “overplay” its role in the rescue efforts, brag, and was actually putting the White Helmets at risk.

To listen to the interview click here and go to the 49:00 minute mark. Here’s a short transcript (emphasis added):

Momani: “But I would also point out that the Israelis, particularly Prime Minister Netanyahu and the Israeli Army have tried to overplay, frankly, their involvement making this very much about a rescue that they committed and I would point out that that actually really harms the remaining White Helmets inside the country. So It’s really disturbing to see the Israelis take this line because it really just endangers them.”

CBC Anchor Williams: “How does it endanger them?”

Momani: “Well, quite frankly, it sort of feeds into the narrative of both the Syrians and Russian propaganda that somehow the White Helmets are western agents. So the remaining ones, we know that not all 800 that were sort of initially promised to come through were able to make the journey some of them got held back by roadblocks and fighting, now they’re in great peril and I think that’s really the unintended consequence of Netanyahu trying to get bragging rights out of this.”

Momani made these statements without any challenge from CBC guest Anchor Megan Williams. Indeed, Momani made similar comments on CTV News on July 22 where she felt it necessary to claim that Israel doesn’t deserve credit and that it did not have a “benevolent” policy. On Twitter she wrote:

This is key and to give Israel credit will only add to government and Russia propaganda that White Helmets are western agents. Media folks please don’t buy in to Netanyahu’s line either. Facts are key. https://t.co/MqmSGCwV65

Momani’s interview on CTV News can be seen here:

While Ms. Momani is entitled to her own opinions, it’s noteworthy to mention that it was Israel who “spirited” the White Helmets into the Israeli-controlled Golan Heights, before being moved to a camp in neighbouring Jordan. The Globe and Mail reported that: “The Israel Defence Forces (IDF) led the rescue effort, which was done at the request of Canada, Britain and Germany, who all committed to resettling evacuees. The operation was also supported by the United States. This extraordinary mission came together to save the White Helmets and their families, years after these medical teams first started working to save civilian lives in rebel-held areas amid the Syrian civil war.” Meanwhile, the Canadian Press and the Toronto Star wrote that the “dramatic rescue” was “orchestrated by the Israeli military and personally encouraged by Prime Minister Justin Trudeau.”