UPDATED: CBC Wrongly Portrays Israel As Intransigent to Peace with the Palestinians 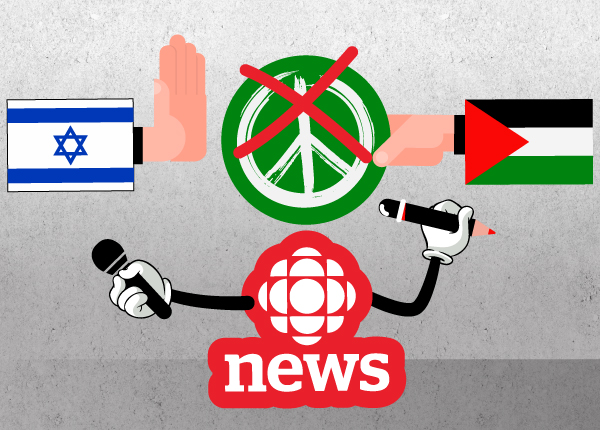 After a CBC report unfairly portrayed Israel as being averse to engaging in peace talks with the Palestinians, HRC liaised with senior executives at CBC News pointing out that Israel has always extended its hand for peace and had long called for the resumption of talks without preconditions. 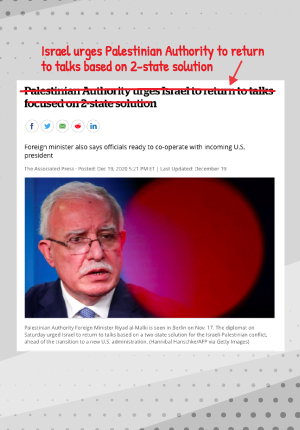 CBC News agreed with our assessment that their reporting was unfair and lacked this context. Accordingly, our public broadcaster amended its original article to acknowledge that Israel had appealed to the Palestinians to resume peace negotiations.

Earlier in December, Israeli Defence Minister Benny Gantz used the normalization deals to appeal to Palestinians to return to negotiating.

“The Middle East is changing,” he said in a Facebook video message, reported the Jerusalem Post. “It is in your interest to integrate and to return to the negotiating table and create hope for the future of the next generations.”

As well, the following clarification notice was issued:

While we appreciate the remedial action undertaken by the CBC, this is too little, too late as the damage was done. CBC’s scandalously depicting Israel as being obtuse to peace talks with the Palestinians was unforgivable. We expect better from the CBC.

A sober analysis of the state of the Middle East peace process would point to the talks as being moribund.

As to why the parties aren’t at the negotiating table, an informed assessment would acknowledge that under the tutelage of Palestinian Authority President Mahmoud Abbas, the PA has refused to engage in direct, face-to-face peace talks with Israel for the past six years.

Accordingly, it was concerning to see the CBC publish an AP article on December 19 entitled, of all things: “Palestinian Authority urges Israel to return to talks focused on 2-state solution”.

The article states the following (without sarcasm):

The Palestinian Authority’s foreign minister on Saturday urged Israel to return to talks based on a two-state solution for the Israeli-Palestinian conflict, ahead of the transition to a new U.S. administration.

In a news conference after their meeting, al-Malki said that the Palestinian Authority is ready to co-operate with U.S. president-elect Joe Biden on the basis of achieving a Palestinian state, with East Jerusalem as its capital on territory Israel captured in the Six Day War in 1967. Biden will be sworn into office on Jan. 20.” 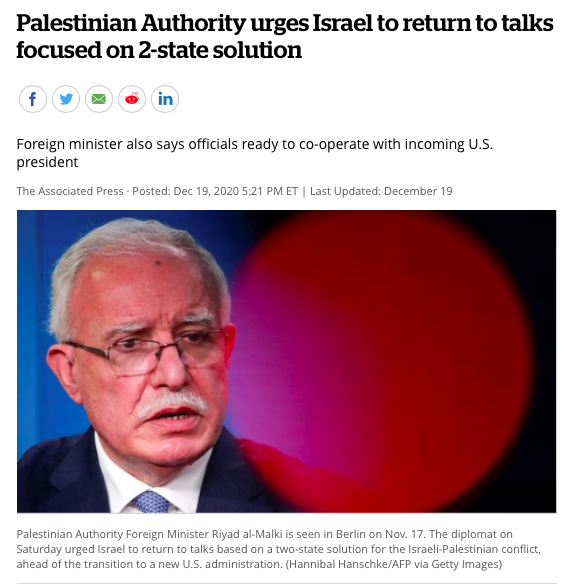 It’s very troubling that CBC’s article wrongly portrayed Israel as being intransigent and obstructionist to engaging in good faith negotiations with the Palestinians. In fact, only the inverse is true.

Israel has always extended its hand out for peace with the Palestinians and has sought to engage in direct, face-to-face bilateral talks without preconditions.

It’s the Palestinians and their rejectionist tendencies who have refused to come to the negotiating table. As a result, the “peace process” has been moribund for the better part of the past six years.

Instead of sitting down to forge peace like their Arab neighbours in Bahrain, UAE, Morocco, and Sudan, the Palestinian Authority has instead preferred a policy of unilateralism, instead of diplomacy, to further their interests.

By failing to mention Israel’s desire for peace talks to be resumed immediately and without preconditions, this CBC report unfairly cast Israel as being averse to engaging in peace talks to resolve final status issues.

HonestReporting Canada is of the position that this report should be amended by the CBC to reflect Israel’s longstanding position about its desire for peace talks with the Palestinians. Such context is vital and warranted and we have relayed this request directly to senior executives at CBC News.

We await the CBC’s reply. Stay tuned to this page for future updates.