In coverage of U.S. President Donald Trump’s visit to Israel, on May 21, CBC News reporter Susan Ormiston filed 2 reports which wrongly claimed that the Israeli Security Barrier is a “permanent” demarcation line and barrier.

“The separation barriers were constructed by Israel 14 years ago to stop attacks by Palestinian suicide bombers. They’ve become permanent demarcation lines and a source of deep tensions.”

“He calls it a big jail. The walls were built 14 years ago by Israelis to prevent attacks by Palestinian suicide bombers. But they have become permanent barriers.”

In contending that the Israeli Security Barrier is a “permanent demarcation line,” CBC has adopted the Palestinian position by tacitly claiming that the barrier serves the purpose of land grabs from the Palestinians. Instead, Israel views the barrier only as a temporary security measure that is designed to prevent and deter Palestinian terror. In Israel’s mind, once the Palestinians disavow and stop terror and stop inciting its populace towards murdering Jews, perhaps the barrier can come down when ironclad security guarantees are put in place.

But for CBC to claim that the barrier has become a permanent demarcation line, is an unfair characterization of the situation, lacks required journalistic neutrality, and distorts Israel’s perspective of the matter. 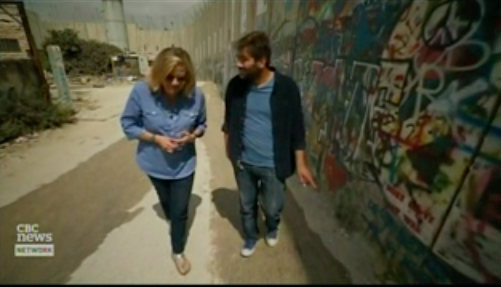 “I’ve re-read the article several times, and I see nothing that suggests Ms. Ormiston accepts the position of either side. She was simply stating something obvious: that these barriers have been around for 14 years. So for those living around them, they have become a permanent fixture rather than a temporary presence.”

HRC appealed to the CBC’s Ombudsman to conduct a review to determine if this statement was adherent to the CBC’s Journalistic Standards and Practices. Regrettably, in a review released on June 15, Ombud Esther Enkin wrote that (emphasis added) “This was not a complex or an in-depth look at the issues to be solved in any potential peace agreement or borders between Israel and an independent Palestine. It is in the context of a Palestinian man and his experience. There is no violation of policy.”

Enkin’s review altogether failed to take into consideration our request that this statement be featured in attribution. CBC could have simply stated that “Palestinians say they’ve become permanent demarcation lines…” Had the CBC done so, there would be no problem with these reports.

To repeat, Israel says the barrier is a temporary measure to safeguard its populace. When Palestinian terror stops, the barrier can come down.

As is, the CBC is claiming that as a matter of fact, that the barrier is a permanent demarcation line and barrier, and Israel fundamentally disputes this by saying that it’s a temporary security measure.

The CBC’s adopting the Palestinian position that the barrier is a “permanent demarcation line” is a standing violation of its requirement to be neutral and objective. CBC has, contrary to its claims, taken sides on this matter.