On June 4, CBC posted the following video to its Facebook page about young Palestinians in Gaza (not Israel as the CBC had claimed) doing Parkour:

As of this writing, the post had over 600 likes, 210 shares and dozens of comments, but we were alarmed at one comment in particular which crossed the line into hate speech:

Calling for Israel’s destruction and the ultimate genocide of the Jews residing there is hateful and a violation of the CBC’s standards. HRC notified CBC executives who commendably took the post down and issued the following warning to commentators:

With that said, Godwin’s law that “As an online discussion grows longer, the probability of a comparison involving Nazis or Hitler approaches” came into force with the following antisemitic comparison made by a commentator of the Jewish people to the Nazis and Hitler: 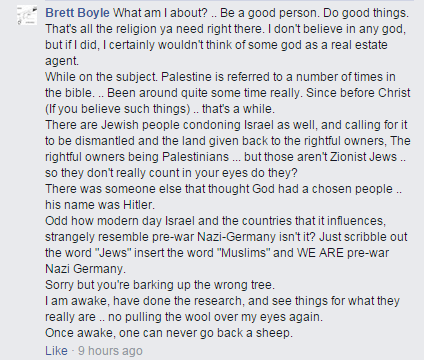