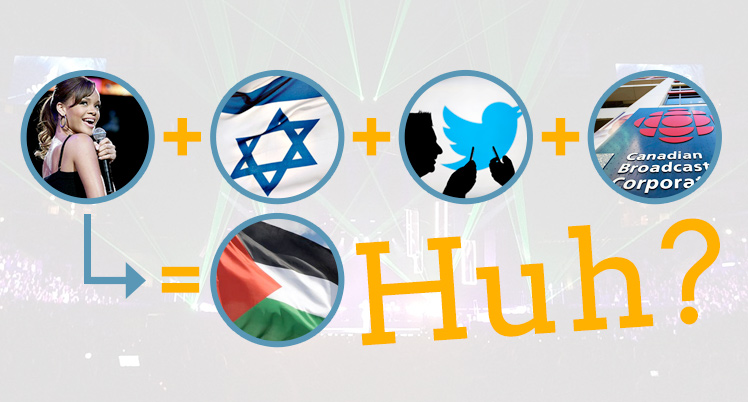 Mark Twain famously said, “A lie can travel halfway around the world while the truth is still putting on its shoes.”

A perfect example illustrating the anatomy of how an anti-Israel libel spreads happened just this past week. Anti-Israel activists conjured up the fiction that pop star singer Rihanna declared her support for “Palestine” during her recent concert in Tel Aviv in front of an audience of over 50,000 people.

Anti-Israel protagonists propogated the myth that Rihanna replaced the lyrics in her song “Pour it Up” by changing the words “All I see is dollar signs” with “All I see is Palestine” in her Tel Aviv concert. This claim gained traction first in anti-Israel forums, went viral and then got mainstream credibility when Israeli newspaper Haaretz first reported on the story claiming it was authentic. 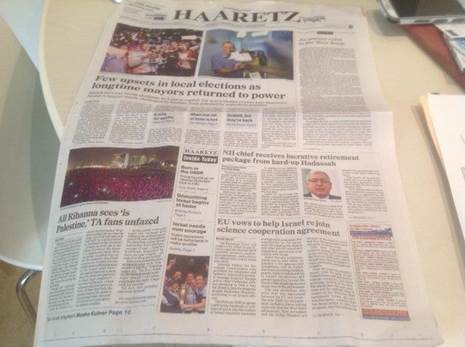 Stoffel had based his Tweet on this erroneous Haaretz report and tweeted this message to his 7,118 followers. Unbeknownst to Mr. Stoffel, our colleagues at CAMERA (Committee for Accuracy in Middle East Reporting in America) had called on Haaretz to retract this claim due to its lack of veracity.

For example, as CAMERA notes: “A YouTube clip of the show eliminates any doubt about the words that came out of the singers mouth. (It should be noted that the sentence in question, like most of the song, was lip-synced, so it would have taken a great deal of planning, energy and time to replace the words. The relevant sentence can be heard just before the 7th minute of the clip:”

In reality, there was no evidence to confirm that Rihanna made this statement. Under pressure, Haaretz retracted this claim in their report:

As a result, HonestReporting Canada contacted Mr. Stoffel to bring this development to his attention. We were pleased that he swiftly issued the following Tweet on October 24 to update his followers of this development: