On October 16, HonestReporting Canada filed a complaint with CBC where we strenuously objected to CBC TV’s reporting that morning by Anchor Heather Hiscox who claimed that fire merely “broke out” at Joseph’s Tomb in Nablus vs. it being intentionally torched by Palestinian rioters.

Ms. Hiscox’s report aired at 6:18am and it can be viewed by clicking here or on the image below. Please note the super to this report which contended that there was merely a “Fire at West Bank Holy Site”. 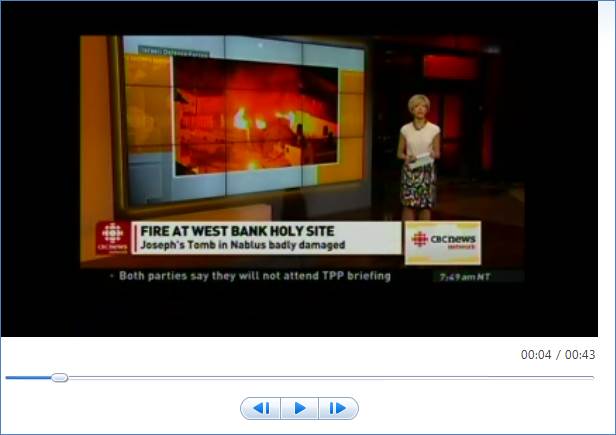 In fact, Palestinian rioters deliberately set Joseph’s Tomb on fire. They threw firebombs and other incendiary devices. Fire didn’t just merely break out, it was an arson attack on a holy and sacred Jewish shrine which the Palestinian Authority is duty bound to protect and safeguard.

CBC TV’s reporting was fundamentally contradicted that day by both CBC Radio World Report (listen by clicking here) and CBC News.ca which reported the following:

World Report: “Dozens of Palestinians tossed fire bombs at a Jewish holy site the tomb of biblical patriarch Joseph in the occupied west bank. Palestinian forces were able to extinguish the flames. The incident happened just hours after the Israeli prime minister called on Palestinian leaders to stop the recent wave of violence. In the past few weeks, there have been several fatal stabbing attacks on Israelis. Several Palestinians have also been killed in clashes with Israeli forces.”

In light of this information, we called on CBC News TV to immediately issue an on-air corrective to set the record straight and with regret, we received the following response by Jack Nagler, Director of Journalistic Public Accountability and Engagement:

The coverage of this story on CBC News Network has evolved over the course of the day. During the 6:18 AM story you cite, you might not have heard Heather Hiscox add about the fire that “Israeli authorities say it was arson.” So although we could have been more precise, I think it was clear even then that this was not an electrical fire or something else mundane.

As the day went on, our reporting became more precise and more pointed. As one example, Suhana Meharchand at 12:19 reported very explicitly “The tomb of the biblical figure Joseph was firebombed overnight”. And, as you noted, our other CBC platforms have reported the story in full.

For the record, here is our response as issued by HRC Executive Director Mike  Fegelman, expressing our disappointment that CBC did not set the record straight about this matter:

If I can parse from your statements, you acknowledge that CBC TV’s initial reporting “could have been more precise,” but you contend that it “evolved over the course of the day”. I must ask, in what way did it evolve? What you and the CBC should be acknowledging is that coverage “improved” from previous deficient reporting.

What I see is that CBC made an error (not just a lack of precision) in claiming outright that a “fire broke out,” perhaps even unintentionally or spontaneously vs. the Tomb being firebombed on purpose by Palestinians. While later reports accurately noted that the Tomb was torched in an arson attack, CBC never did own up to its shortcomings in a public, transparent and accountable manner, nor have you done so in your response.

You point to Ms. Hiscox saying: “Israeli authorities say it was arson,” but you and I know the difference in how this statement is in attribution, a mere claim, whereas Ms. Hiscox stated as fact that fire merely “broke out” without assigning blame to the Palestinians, which is a verifiable fact.

You say that “… I think it was clear even then that this was not an electrical fire or something else mundane.” Someone who just watched this report, but didn’t listen to it, would only be able to come to the conclusion from the images and the super that there was a simple “fire at (a) West Bank holy site”. Same can be said for someone who didn’t listen to the last 3 seconds of this report where Ms. Hiscox said “Israeli authorities say it was arson.”

CBC’s reluctance to issue a correction on this matter is deeply regrettable.

Will Antisemitism Register at Ryerson University and its...

War of Words: How Hamas Manipulated the Media...

WATCH: Why Does The World’s Lone Jewish State...

The Real Story of Israel’s Relations with the...

Why the Media Keeps Getting the Jerusalem Story...