CBC The Current’s Bias Against Israel On Full Display

The last few weeks have seen a dramatic upsurge in violence between Hamas and Israel. And CBC News, like most mainstream Canadian broadcasters and news outlets, covered the news regularly, with frequent updates and reports.

On June 7, The Current conducted an interview with Tel Aviv-based journalist Haggai Matar, Executive Director of 972 Magazine, who weighed in on the newly announced Israeli coalition government. Matar claimed Israel was an “apartheid” state and Galloway failed to rebut the allegation.

On the May 28 edition of The Current, host Matt Galloway interviewed Bessma Momani, a professor from the University of Waterloo, and Daniel Kurtzer, the former US ambassador to Egypt, and later to Israel. The segment discussed the ceasefire between Israel and Hamas and future prospects for peace, but while discussing disagreements between Israel and the Palestinians, Kurtzer made the unsubstantiated comment that Israel is doing “malign activities in Jerusalem.” Presumably he is commenting on the evictions of a small group of Arabs in the Jerusalem neighbourhood of Shimon HaTzaddik, known in Arabic as Sheikh Jarrah, whose court-ordered eviction is as a result of nonpayment of rent to their legal landlords, and not as a result of any “malign activities.”

Kurtzer also remarked that “Israeli occupation practices must change,” but gave no evidence to back up his claim that Israel is illegally occupying any Palestinian land. In fact, as international legal scholar Professor Eugene Kontorovich has pointed out, prior to Israel’s possession of Judea & Samaria (commonly called the West Bank), there was no sovereign nation previously owning that land, and therefore Israel does not occupy the West Bank illegally at all.

The day prior on May 27, The Current interviewed Daniel Taub, Israel’s former ambassador to the United Kingdom, to discuss the ceasefire between Israel and Hamas. Galloway challenged Taub asking “if the deaths of 60 children (in Gaza) is acceptable” to Israel, but did not mention the critical context: that Israel’s military actions in Gaza were a direct result of Hamas firing thousands of rockets indiscriminately into Israeli population centres from within Palestinian civilian areas. Galloway berated Daniel Taub and tacitly condemned Israel for Palestinian civilian casualties, without considering how Hamas embeds its weapons and terrorists from within civilian populations. Taub even had to plead to Galloway asking what alternative Israel has as it does everything to avoid civilian casualties, the implication being that Galloway would implicitly prefer that Israel should just let Palestinians fire deadly rockets without Israel taking defensive action. Galloway had no response to Taub’s rejoinder. 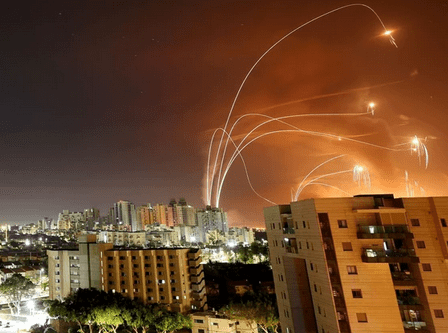 Galloway also made a charged and factually inaccurate statement when he described the “expansion of settlements in the West Bank, which is a violation of international law,” and asked how settlements “create the conditions for a lasting peace?” Galloway’s leading question about the alleged illegality of Israeli communities in Judea & Samaria and his factual inaccuracy is one problem, but the bigger issue with his line of questioning is what he neglected to ask.

Israel’s communities in question are very much legal according to international law, but the stumbling block between Israelis and Palestinians is not a neighbourhood with Jewish residents, but the refusal of Palestinian leadership, both Hamas and the Palestinian Authority (PA) to accept Israel’s right to exist as a Jewish State. After all, Jewish communities can be torn down – as Israel did in the Gaza Strip in 2005 – but it did not create any lasting peace, and in fact it only gave Hamas unfettered ability to turn the region into a terrorist launching pad.

Galloway’s second guest on May 27 was Mkhaimer Abusada, a professor at Al Azhar University in Gaza, who made the outlandish claim that “the origin of the problem is the Israeli occupation of the Palestinian territories, West Bank, Gaza and east Jerusalem.” Of course, the Gaza Strip is in no way, shape or form occupied by Israel, after Israel’s Disengagement in 2005, when it made the heart-wrenching decision to forcibly remove about 8,500 Jewish residents from Gaza, some of whom had lived there for generations, in a show of good faith for peace. To suggest, then, as Abusada did, that Israel’s non-existent occupation of Gaza, is a contributing factor to the recent violence, is simply absurd and without any basis whatsoever.

A few days earlier, the May 21 edition of The Current featured a Gaza doctor, who was identified as Dr. Rasha, who was interviewed about the state of Gaza’s healthcare system. She described, without any supporting evidence, and without any challenge on the part of host Matt Galloway, about “thousands” of incidents of “civilian people who have been targeted (by Israel) without any reason.” Dr. Rasha also mentioned the shortage of consistent electricity in the Gaza Strip, with no mention that most of Gaza’s electrical generation comes from a power station in the southern Israeli city of Ashkelon, which, ironically was targeted and hit by Hamas rockets during the recent violence.

On the May 14 episode of The Current, Matt Galloway discussed the violence between Arabs and Jews within Israel proper, which had included violent and random assaults on both groups, as well as the burning of multiple synagogues in the central, mixed city of Lod. Galloway mentioned the riots, but said nothing about the burning of synagogues. Unfortunately, his omission was one of the highlights of the program, as later on, he was joined by guest Diana Buttu, a former advisor to the Palestine Liberation Organization (PLO).

Buttu made a series of grotesque and baseless claims about the violence. She claimed that Israeli police were “targeting houses,” and their goal was “to enter, arrest or beat individuals,” and that Jewish mobs were “being aided by the Israeli police.” There was zero evidence given, nor was there push-back by Galloway. Ironically enough, Buttu conducted the phone interview from Haifa, a city in northern Israel with a large Arab minority and a long history of peaceful coexistence between Jews and Arabs. Buttu also claimed that there is a “system of Jewish supremacy” within Israel, but said nothing about the reality that two million Israeli Arabs have full and democratic right alongside the Jewish majority in Israel. Israeli Arabs can vote and be elected to the Knesset, Israel’s parliament. They have served on Israel’s supreme court, and are active in business, diplomacy, media and more within Israel. Clearly, then, Buttu’s attempted portrayal of Israel as being under a “system of Jewish supremacy” is fanciful, and based in nothing more than ideology, not facts.

During her interview, Buttu (pictured right) made no mention of Hamas terrorism, the four thousand rockets fired by the Islamist terrorist 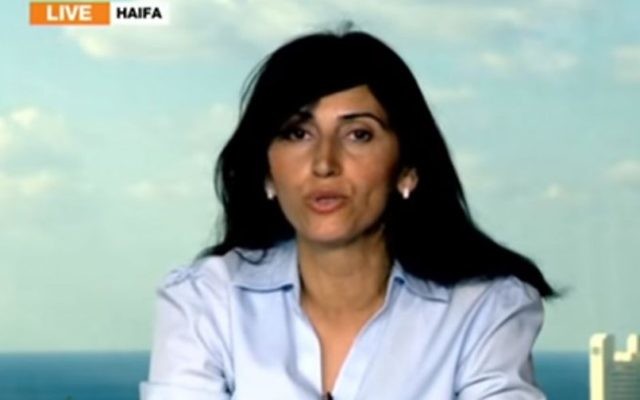 group at Israeli population centres, its public stance that it seeks Israel’s eradication, its homophobia or its general horrendous human rights abuses of its own people in Gaza. When asked about Israel’s right to defend itself, Buttu responded: “When do Palestinians get to defend themselves from 54 years of brutal occupation…” However, she conveniently neglects to mention, nor does Galloway challenge her, on the basic fact that Israel fully evacuated the Gaza Strip nearly 16 years ago, and the entire strip is now judenrein – free of Jews. Somehow, even without a single Jew living in the Gaza Strip, Israel is still occupying it, thus justifying the ongoing Palestinian terror attacks against Israeli civilians.

Buttu also argued that “even (Palestinian) worshippers are not allowed to worship in peace” a reference to the Al Aqsa mosque in Jerusalem, where Israeli police faced off with violent Palestinian rioters. What Buttu did not mention was that Israeli police were at the Al Aqsa mosque – built on top of the ancient Jewish Temple Mount –  to stop violent Palestinian rioters from hurling rocks and firecrackers. Regardless of Buttu’s claims, when Israel acts to stop rioters from stockpiling rocks, they are not infringing on anyone’s religious rights, unless she believes said rights include acts of violence.

On the same program, Matt Galloway interviewed Daniel Levy, president of the U.S. / Middle East Project think tank and former advisor to former Israeli PM Ehud Barak, and described him as non-partisan, despite his many partisan anti-Israel comments throughout the interview.

Two days prior, on May 12, host Mark Kelley interviewed Fares Akram, an Associated Press (AP) correspondent in Gaza, who made additional eyebrow raising claims about the tensions between Israeli police and Palestinians in Jerusalem.

“So by the day, confrontations between Israeli police and Palestinian worshippers in Jerusalem and the use of force by the Israeli police, including stun grenades, rubber bullets and other riot dispersing techniques, Israel struck a nerve for the Palestinians because the (Al Aqsa) mosque has great emotional status,” Akram told Kelley.

Unfortunately, similar to Buttu, Akram gave no context as to why Israeli police were in riot gear in the first place – namely, to disperse violent riots – or that the Arab rioters had stockpiled rockets in the Al Aqsa mosque itself, suggesting that if either party was in violation of the Al Aqsa Mosque’s sanctity, it was the rioters, not the Israeli police.

Perhaps most scandalously, Akram referred to the Al Aqsa Mosque as the third holiest site in Islam, but said nothing about the Temple Mount being the holiest site in Judaism, or about the mosque being built literally atop the ancient Jewish structure, which predated the mosque by thousands of years.

CBC News in general, and The Current radio program specifically, has a role and a responsibility to report on major news of the day, and in recent weeks, that absolutely included the armed conflict between Israel and Hamas. Unfortunately, a number of its guests made baseless and false claims, and their arguments often went unchallenged by the CBC’s host. This repeated failure on the part of a marquee news program by Canada’s national broadcaster should be cause for serious reflection and improvement. HRC has filed a complaint with CBC News about The Current’s anti-Israel bias and we encourage you to do the same. Send your complaint to CBC by clicking here and Tweet The Current @CBCTheCurrent.